The Case For Passing The Federal Remittance Tax

About 11.7 million immigrants are living in the United States illegally, a population that has not varied much over the last three years but may recently be increasing again, according to estimates published by the Pew Research Center Hispanic Trends Project.

Among this segment of the US population the majority are Latinos. Most have entered the US by crossing the southern border on foot, then meeting at a rally point before taking varying forms of transportation away from the border area. 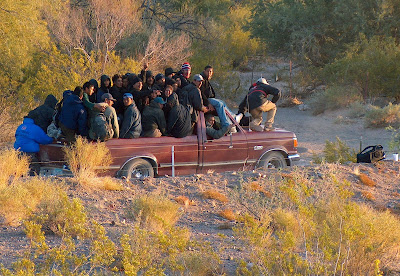 Immigration, lately associated with the word reform has become the "3rd Rail" of politics with few viable mandates and even fewer answers. The recent increase in the number of unaccompanied juveniles has prompted wide ranging theories but again no solid answers.

Clearly the surge in illegal immigrants is a security concern, perhaps even an economic concern as well. Border states complain of being overburdened with the education and medical needs of illegals, liberals speak of humanitarian concerns, and conservatives of costs to taxpayers.

The flood of immigrant children has prompted call for increased patrols, and fences. But, no
amount of fence, police or military will slow the flood until we remove the reason immigrants illegally cross the border risking their lives in the first place.
And Yes its all about the money - while some will say it is to escape the crime and violence in the Narco states of northern Mexico the real reason is money.
The average illegal immigrant family of four has a median income of $35,000 not bad when you consider that in central America that number is less than 3k.
And the money that is sent home each week by these illegals is in the millions. Western Union the biggest pipeline of remittances to Mexico and Central America collected more than $4,168,000,000 in transfer fees in 2013. If only 1/3 of their transfers are to Mexico or Latin America that still equals nearly 10% of US GDP.
My former sister in law is a good example, in that she sends $200.00 a week home to her parents in Honduras. That's more than $10,000 per year that permanently leaves our economy. She like many of her friends are in "cash only" enterprises. They pay little or no income tax, contribute nothing to social security and use only pre-paid debit cards. Yet they rely heavily on Federal, State and Local social services and health care.
Immigration is indeed the "new" 3rd rail of politics. Which is why the "Federal Remittance Tax" bill will never come to a vote. Yet it is the best option for a situation that has become desperate.
A 25% tax of all dollars leaving the US to Latin America may not stop the flood of illegal immigrants, but the nearly 1 billon dollars it would raise could be used to provide social services, health care and provide state and local governments with the funds to offset the expenses of dealing with the segment of the population that is more prone to crime.
But Congress is deft to the idea.
CP Notes: In fact there is no remittance tax bill. Just a catchy name made up by Cedar Posts. I'm not an economist, the amount of money leaving the country attributable to illegals is just a guess as is the revenue realized from such a tax.
So what are your thoughts?

Perhaps the best solution would be to push for better conditions in their home countries. Who would move to a country not their own if they could make the same money and experience the same opportunities at home. Meanwhile, the officials in their countries have no reason to change things because all the money coming back home to relatives is a safety valve, putting off the day when something will have to be done. You can be more than certain that if the USA isn't interested in creating a Remittance Tax, the officials at the other end are imposing their own taxes in the form of bribes. Having lived with a foster child who was trying to get money back home to VietNam,I was introduced to what goes on when the money reaches the people in their homeland.

It is hard to "push" for anything, especially economic improvements, enhanced infrastructure, and a better quality of life in a country that we have no jurisdiction over. We can't even manage those things within our own borders. An effort to bring a nation of the third world would be impossible without major aid on top of the billions our government already gives regularly to various nations. A remittance tax would help slow the flow of monies out of our economy, help collect lost tax revenues, and fund programs to assist those otherwise not paying into the broken system that is our government.

Then to be fair, every time you go on a trip or spend any money out of the country, the same tax should apply.

8:55 I agree to be fair you would charge a tax on all funds exiting the US.

However, the intent would be to tax income that is normally outside the reach of the federal income tax. ie Cash Wages, Drug and Prostitution income and so on and only to those "target countries".

This cash sub economy is vast and very extensive. Further, most of the funds expended on travel are to solid trade partners and we can assume that tourists from EU return these funds to the US.

But travel to Honduras, Costa Rica, El Salvador, and other central American states in basically nil.

Another racist idea from Cedar Pukes!

The mayor described his relationship with Grace "Molly" King as "sticky" and described his wife as a "Rock" but Cedar Posts take away on the emails is a little more troubling.wood fence pickets