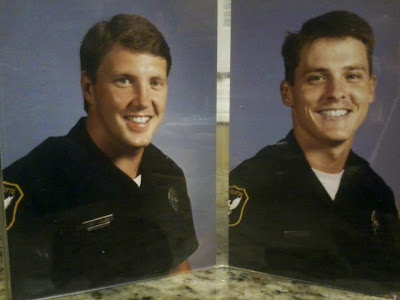 John and Andy were the first two officers killed at one time in the history of Charlotte and Charlotte Mecklenburg Police Department.
The officers patrolled Boulevard Homes - a housing project that was notorious for crime.
On October 5, 1993 John and Andy were chasing a suspect who ran into a wooded area near the Boulevard Homes housing project.
The suspect shot and killed the two officers.
In the 21 years since, Charlotte has erected a memorial Uptown to honor all officers who died in the line of duty. Burnette's and Nobles' names are there.
That's not the only place.
City officials tore down Boulevard Homes and built the Renaissance Development.
Two roads in that development are now named after the officers.

You are really tuned into the city and the story of these officers cedar. The roads were named after them long before the new development was built.

If I remember correctly the streets were named in 1997. Then they were removed and new streets were built with round-a-bouts and formally named again, after the new development was openned.