The White House admitted a major faux pas was made when President Obama snubbed the people of France and basically the entire world. 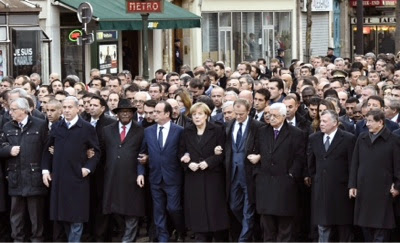 "I think it’s fair to say that we should have sent someone with a higher profile to be there,” White House spokesman Josh Earnest told reporters, Monday. “We here at the White House should have made a different decision,” he added, though he insisted the president was not consulted personally on the decision.

Seventeen people died in Paris last week when Islamist terrorists attacked the office of the satirical magazine Charlie Hebdo, killing 12 people, and a kosher supermarket, killing four; a police officer was also shot dead by the man who attacked the supermarket.

But the Obama administration is so dysfunctional that US secretary of state, John Kerry, at the same time dismissed concerns about the conspicuous absence of US politicians among other world leaders at the march in honour of the victims as “quibbling”

So who stood with Charlie? Who stood with France? Who are the world leaders who joined French President Francois Hollande?

That photograph was staged.

It did not take place where the rally was.

At least a dozen of the leaders present represented countries at the bottom of the list for press freedom.