File this under you've got to be kidding!

Now whistling Dixie is offensive? Well, Y'all are just going to have to be offended. (Yes, most people I know stand when they play Dixie.)

I figure if Kevin Spacey can sing the entire song on House of a Cards its not a federal crime, at least not yet.

Finally the staff member was whistling the song, that is without out the lyrics (which aren't really offensive in fact)  so how could anyone except maybe Brigida Mack be offended? 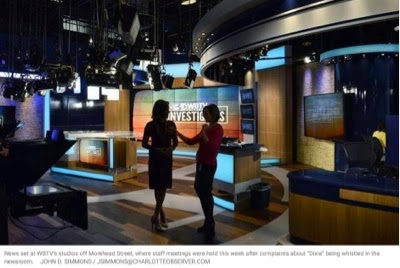 On Wednesday morning, a photographer was heard whistling in the newsroom the folk tune “Dixie,” whose origins date to the blackface minstrel shows of the 1850s before becoming an anthem for Southern forces in the Civil War. Several African American staffers were in earshot.

“We wanted the staff to know that we don’t tolerate things in the workplace that make people uncomfortable,” Milligan said. “We encourage people to come forward. I think it was handled in an appropriate way.”

Milligan said the matter was a personnel issue and he could not comment further on whether any disciplinary action was taken. He did say that the incident was an “extremely unusual” one in the station’s newsroom.

“I am grateful that our station’s management addressed the issue immediately,” said Mitchell, a news content specialist at WBTV who was in the newsroom when the incident occurred. She said the local chapter and the national organization would continue to monitor the station’s response.

“This is a learning lesson for all and we hope this will never occur again.”

So there, as fact you have it, one or more of WBTV's "African American" staffers were offended by someone whistling a song that has been around for more the 150 years. A song no different than, Oklahoma or New York New York sung by Frank Sinatra but offensive to some wack job at WBTV.

My guess is Brigida Mack but who cares?

Cedar Update: I guessed wrong the offendee it turns out was Steve Crump. Seems he's been listening to his own stories so much he believes whitey is out to get him. Apparently he considered the whistling a taunt and apparently felt intiminadated.

In defense of Crump he apparently said he felt "uncomfortable" and apparently not not offended. Somehow Dixie apparently made Crump think of strange fruit much like the theme music from Jaws makes me think of swimming in lake Norman.

But this is why there is a racial divide in this country. It's ok to sing "We Shall Overcome" or blast a rap song called "Cop Killler" but don't you dare whistle DIXIE!

Read more here: http://www.charlotteobserver.com/entertainment/tv/media-scene-blog/article14423408.html#storylink=cpyssSo as fact there you have it, one or more of WBTV's "African American Staffers" were made uncomfortable by the song Dixie.

Oh geesh...were these black African-Americans or white African-Americans? How come they never differentiate between the two. Ya know, someone can be of "African descent" and be white also! There's lots of white folks in Africa that immigrate to the U.S. and become citizens!

Now now..... Rap music that denigrates women, glorifies drug use and killing, and repeatedly uses the N word is not offensive at all. It is especially appealing when it is blaring and rattling from an old auctioned squad car!

He is as racist as they come.

Here's an interesting read ... http://civilwarheritagetrails.org/civil-war-music/dixie-land.html
Of special note - "... and President Lincoln included Dixie among his favorites."

What an absolute fucking Moron, I'm offended everyday that I leave my house by someone's stupidity, maybe I can get them banned. Guess there's no freedom of speech for anyone who is not Black, Hispanic or any other minority.
WBTV is now on the banned list..