Dawn breaks over south Charlotte, as a pair of Killdeer chatter back and forth along the 18th fairway of Quail Hollow Country Club. They are often considered a threatened species, a ground nesting bird that due to its poor habit of laying their eggs on the cart paths of golf courses has a fairly high mortality rate. 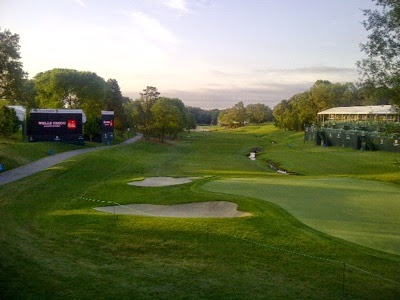 Entering the Well Fargo Championship Sunday you might want to think of the Killdeer.

For most patrons entering the golf tournament is much like any other sporting event, bag searches, magic wand screenings, lines of low paid workers in less than imposing shirts that say “security” and an occasional CMPD police Officer working secondary employment scan the crowd.

They do an admirable job screening the patrons looking for any obvious trouble makers. But their success is more driven towards keeping your cheap beer and John 3:16 signs off the bus.

Pretty tight security right? Hardly. The Wells Fargo Championships is as porous as the Swiss cheese at Harris Teeter.

Step off the bus at Carmel and Quail Hollow Roads, walk up Glen Eagles past the security check point where the police are far too concerned about the cars to give notice. Turn left through the pedestrian entrance and on to the course. It’s as easy as that, no security, no police, no one even checking to see that you have a ticket, nothing.

Don't feel like walking up Glen Eagles or riding the bus? Drive your car up Glen Eagles at 5:59 am before the cops show up. Park in the lot across the street from the club and again walk right in no ticket required.

In fact none of the media, players, VIP patrons, or members are screened or have their bags searched. Wear a blue blazer, pair of khakis and a tie you can walk right into the club.

Carry your back pack anywhere you like no one even looks sideways at you.

Access to the 18th Green and sky boxes is no problem it’s all unattended. The hole marshals won’t even show up until nearly 10 am.

Vendors deliver donuts, the Charlotte Observer and Coffee. A golf cart rumbles by with programs as the players won’t make it to the first hole until 7:30 and most of the time no one is around.

Taking it all in you can’t help but notice that anyone with a blind faith in Muhammad could walk in here and set device on a table and walk away.

The attractive green webbing around the bleachers could easily obscure a small back pack a mere 59 feet from the 18th green, where the bowl shaped area with live television coverage will soon hold five thousand spectators.

Even during the height of activity no more than four CMPD officer cruise the course on bikes. There is a battered CFD golf cart with two firemen/medics that every once and a while moves through the crowd. Course marshals have radios but coverage is spotty and few even know that there is an emergency channel. Most don’t understand how to work the radio other than the volume and push to talk button. And few know that the back nine marshal group is on a different channel from the front nine.

There are no bomb dogs, there are no eyes screening the crowds. There are security cameras but they are only concerned with the club house.

Mickelson and McElroy have a single police officer that walks the course with them, but security for the rest of the players is nonexistent.

The police ranks are far too thin, players too self-absorbed, fans too drunk, and vendors too consumed with their jobs at minimal pay to do be concerned about your back pack.

Friday two apparent photographers with an Asian news agency were out walking the course inside the ropes with back packs and cameras the size of stinger missiles. Of course they were media, but neither displayed the required media credentials and no one asked them to produce their photo ID Wells Fargo Championship badge.

Need a golf cart just take one, the keys are universal and most the time the keys are left in the cart. Just ask CMPD Chief Rodney Monroe about the perils of leaving your key in your golf cart with a golf course full of drunk patrons.

The lack of security is troubling in the shadows of 9/11 and Boston.

The Killdeer dart again, turn and bank low to the ground, occasionally standing defiantly in front of an oncoming Toro fairway mower.

Johnny Harris and The PGA Tour are clearly more concerned about showing the players and the VIP sponsors and patrons a good time than concerned with security.

A lot of your info is good and much is bad. Where you insist this is or is not happening, I should point out that because you didn't see it doesn't mean it isn't there. Also, if a few of the 35k people out there carried a bag and got away with it, good on them but I would wager that many were screened, had a good reason, and were allowed to carry it. If you walked the course for a day or two and didn't see the things you mention then a bunch of guys did a great job keeping a low profile.

10:23 Sorry to blow up your world but if Cedar says something is so it is so.

There are far too many people in a confined space not to be at least a little concerned.

The Jerry Orr/Rodney Monroe play book always the same old line "just because you don't see it doesn't mean it isn't there."

Which as we know is total bullshit.

Was bulbous Major Bellamy there ?? If so, then all was safe. He has a 79th degree black belt in Ju Jitsu, ya know. Just ask him !

Enough of this bs, write a story about the 2.5 million payout to the family of a man who attacked police and came out on the losing end.

Good article. This highlights complacency in our society, as though "it couldn't happen here." Charlotte is particularly complacent, and I am referring to the citizens, not CMPD on this one--though I have my gripes about police complacency in the field as well. Cedar, you introduce the idea of leaving a package somewhere on the course without being checked by security. What does the overnight security situation look like over there? The risk of being caught is higher, but burying something in the brush has its advantages. Thanks for bringing up this issue.

Trust me the Boston PD and the race organizers were telling the people the same thing. "Just because you don't see security doesn't mean its not there".

Same with Jerry Orr and that kid who jumped the fence, total denial.

That aluminum foil is getting a little too tight. May wanna loosen it up.

It is called operational security.

Its called a golf tournament..... Bunch of old folks drinking Mint Julips and whispering at each other. With the occasional golf clap....

1:40, What is the potential economic/morale impact of an individual opening fire at this type of event or detonating even a crude explosive device?

While you are correct in implying that there is no strategic value to disrupting such an event, it is still a high profile potential target and thus provides value for terrorist propaganda, economic damages, and creating fear amongst the civilian population. Thus would be the same with committing anonymous violence against an upscale restaurant, bar, etc. in Uptown; to simply commit the act has no real meaning--the residual impacts are the true consequences (diminished revenues due to people fearing to congregate in public, fear, loss of faith in local LE and leadership)

Therefore, it is worthy of enhanced security, just as any major sporting event. Such is particularly true when you consider that the "bunch...drinking Mint [Juleps]" is comprised of business leaders, professional golfers, and higher income individuals with status in the grater community.

This is no longer the "Old South;" we live in a target rich environment, whether that is fact is consistently and clearly demonstrated for us or not. The hardening of physical targets is the only way to deter, delay, detect, or defend against random (or planned) attacks such as an attack at a sporting event.

No black helicopters--just situational awareness. I have no need or incentive to convince the skeptics.