Poor "Jenny from the block", she had a menopausal meltdown after confessing that she is a descendent of ... wait for it ...... Jefferson Davis, ok? 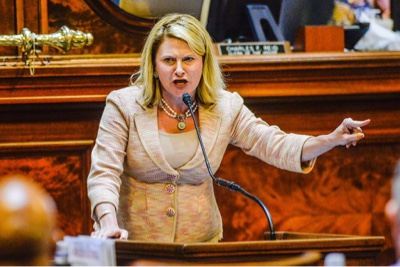 "I'm sorry," she said at one point in her four-minute speech, "I have heard enough about heritage. I have a heritage. I am a lifelong South Carolinian. I am a descendant of Jefferson Davis, OK? But that does not matter. It's not about Jenny Horne. It's about the people of South Carolina who have demanded that this symbol of hate come off the Statehouse grounds."

Of course Horne's claim to Confederate President Davis is a pretty far reach, related maybe, descendent not likely. Davis had but one child that married, add three maybe four generations and well nah this doesn't true up. But I could be wrong. 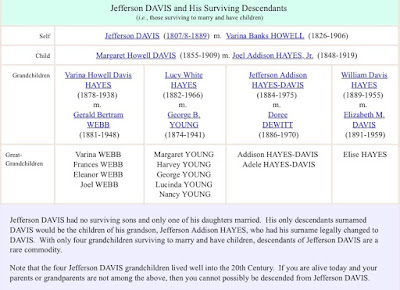 According to the above chart Jenny's parents would be named Webb, Young, Hayes-Davis or Hayes. Her father named Anderson and her mother I'll guess is none of the above. Could one of her grandparents be Webb, Young, Hayes-Davis or Hayes? Doubtful.
In other words she lied and main stream media sucked up her lie as if it was gospel.
Again I might be wrong and indeed Jenny is descended from the loins of Jefferson Davis himself. If that's the case then she has a right to be quilt ridden, otherwise she's just a menopausal nutbag. 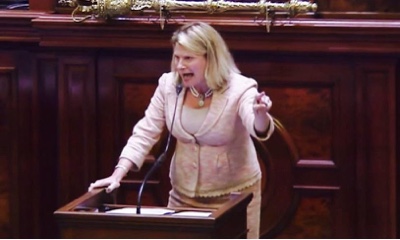 In fairness to Ms. Horne, she probably doesn't understand the difference between being a descendant and just being related.

Which means we live in a world of nonsensical lies and mistruths.

Cedar Update: There may be hope for the Jenny Horne claim to Jefferson Davis yet, as her mother Cynthia Anderson uses the middle initial W could is be that her mother's maiden name is Webb?  Of course that would require that she was born in Colorado.
Cedar Update: Horne now admits she's not a descendant of the famous Southern icon Jefferson Davis. Now claiming that her grandfather told her so, but that she never researched the claim. Her effort to walk-back the tearful claim is a little late, a Wikipedia page has been created promoting the claim. And seriously if your grandfather told you that you were even remotely related to Jefferson Davis or even Abe Lincoln wouldn't you research it just a little?

Too bad a lot of her peers won't follow her lead!

There is HOPE for her generation after all!#Racism&RacistsSuck

Usual politician, lying to get what they want. As usual the public believes them.

I too spent time on a popular family-history website trying to trace from bottom up and did not find much since she and her immediate family are living. Also then went from top down- not completed just yet, but will update as I learn more.

Is it really about the people of the state of SC? Or is it about a "feel good" to sacrifice ones self and denounce "heritage" as main stream media offers up current air time as we go into an election year? By the way, what percentage of flag-opponents and outspoken citizens are actually South Carolinians?

How come it's now publicly acceptable for political decisions to be based on emotions?

Now crawl back under your bigot rock.

8:47, are you good with whites exploiting history, facts, and the strife of the black man for their own political gain, soapbox purposes, and for future elections?

Who's the bigger bigot: The person who feigns outrage, being torn by "heritage" and hamming it to the media up for the aforementioned purposes, or the blogger who calls her out?

But then again, who am I to say who your hero should be?

Based on her mother's Facebook page, her maiden name is Williams.

I cant imagine why anyone is surprised that she lied and that the media didn't "fact check" or call her out, nor am I surprised that the liberal wing nuts are bashing Cedar for point out the obvious. JSMH

Anyone who reads this blog knows Cedar Posts is a racist bigot. His white privilege is showing and now he's upset because one of his own has turned against his banner of hate. It doesn't matter if Jenny Horne isn't related to Jefferson Davis she is in the right the symbol of hate and treason and slavery has no support from a fair and just state.

7/11/15@ 12:27PM..kudos to you and don't forget to include the minions that love CP and also bark in the dark about the dark, but won't & can't bust a grape in a fruit fight, if they had the balls to express the pathetic rhetoric to the very individuals that they spew this vile, hatred filled crap about. #TheytalkIshButTheyArentCrazy

She lied. The proof is cited and linked to in the above post.

Here is a generation by generation work up of Jenny Horne's family tree.

What is remarkable is that within hours of her speech Cedar and others were able to call her out on her lie, yet the media continued to press forward with the lie.

A number of major media outlets were notified of this:

Not one has shown any indication that they are investigating it or following up on it.

Had this been a Republican GOP candidate making a claim of ancestry to a famous figure that was false, it would have been blown apart in a few hours. While she is GOP, her speech and her position in the moment (and the fact that nobody wants to undermine it) is something the media evidently wants to preserve or perhaps simply does not care about.

I was in support of removing the flag, but the record should be corrected. A faker shouldn't benefit from the notoriety of the false claim. If her GF told her and she believed it, fine. But when presented with the proof that the family tale was false, the failure to correct it and to allow people to introduce you (as Anderson Cooper did on the Friday night 360 appearance on CNN on July 10th) as a "direct descendant of Jefferson Davis" is just wrong.

The initial mistake is fine, in my opinion. Failing to own up to it and admit the mistake when confronted by evidence to the contrary is where she is really to blame here.

I saw a video last night of a flag-challenge and ignored it hoping it was a one time id10t. No such luck.

Apparently over the last 24 hours it has gone viral. Disrespectful as it is, more importantly it is unsafe (i.e. in traffic), and it involves destruction of personal property (i.e. Illegal).

We cannot and will not make progress ever, under any circumstance, by continuing to accept that a different opinion or viewpoint defines "wrong" or "right". Nor will we make progress when a differing opinion makes you the target of a "reverse" hate crime.

I thought that in building the proverbial New South that we - as a nation - were making positive strides to be an inclusive and respectful homeland - to all.

We can do so only by accepting (not agreeing but acknowledging) AND appreciating that a variety of viewpoints and perspectives is a good thing. A key component to diversity is inclusion. Accepting that diversity- beyond skin color- is necessary for peaceful living.

When did having a different opinion or thought become inherently wrong? Why do we allow the government and the news media to be the definers of right and wrong? To the point where Southern heritage supporters are held hostage by the threats of the aforementioned illegal and disrespectful response that is seemingly acceptable. Those who have lived peacefully for decades wih flags flying on their trucks or in their yards are now met with hostility. Shameful.

Wake up, America!!!!! Or you'll end up rudely awakened when the alarm sounds. Do you hear the people sing? Singing the song of angry men. The South will rise again, thanks to all these flag shenanigans.

Don't tread on me.

I'm a Yankee genealogist, but also a lifelong historian of the War Between the States, with my sympathies being on the Southern side thanks to a black childhood nanny from the South who loved Dixie, and thanks to my researching the entire history from both sides in high school.

I suspected Horne was a liar because my gut instinct (which has never failed me in screening adoption applicants for an animal rescue I work for) told me she was, yet I had nothing to go on. I began digging into her genealogical background and then found that others had already done so, thereby saving me a lot of work!

So now she admits she is not a descendant? Backpedal much, Ms Horne?

I finally found the truth to the story yesterday, and have trying to get someone to ask her the hard questions. Unfortunately, getting someone to claim such an illustrious Confederate ancestor and throw her family, state and the Truth into the dustbin of history is difficult - which is a good thing.

This James Jefferson Davis was the son of Cross Ragland Davis and Huldah Digby Davis, all born in Georgia.

Thank you for a reasonable commentary on this abominable and disgraceful lie.