CP received a heads up that the CATS folks had plans to shut down the transit center aka bus station, inbound buses and Lynx lines if requested by CMPD.

The above tweet was met as fact by the local main stream media, and a rather touchy retort by Sandy DElousa City of Charlotte media relations hack. 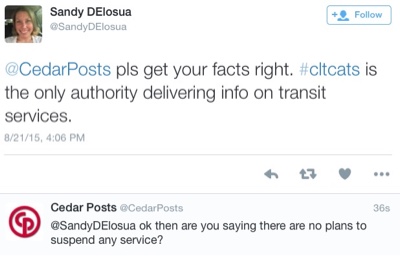 Of course when asked to deny that there where contingency plans in place nothing but crickets.

At least Sandy and the CATS Twitter feed are on the same page, wonder why?
Thirty minutes later main stream media was walking back the story they had earlier ran with.

But CP had already heard that the trolley had been shut down.

Just after 5 pm CATS was forced to shut down the CARS bus transfer station, yet the official tweeter feed was silent. 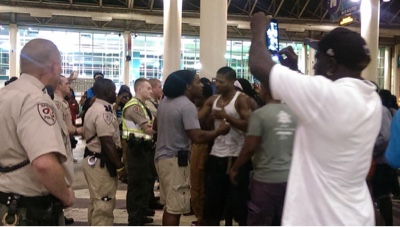 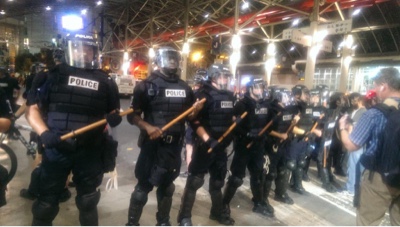 By 8:46 CATS decides to come clean on at least the trolley which hadn't moved since 2:15.
Finally at 11 pm, nearly five hours after bus service to the transportation center was shut down CATS tweets the obvious.

CP's Take: I've got pretty good sources. Sometimes the details are a little off, which is just enough for GuvCo to deny the facts. Not sure why they don't just tell the truth. "Yes, we have contingency plans to work in concert with CMPD, to shut down the buses and the Lynx lines, if needed, but no decision has been made yet".
Now we know that Sandy is just anither GuvCo liar with a resting bitch face.
Posted by Cedar Posts at 12:27 AM

Good reporting on the facts CP. This is a great example of how the City controls and contorts the flow of information, or misinformation, and why, looking at the comments on another piece, officers feel they have no voice in the mainstream media. It is a FACT that Romo offered mainstream media unprecedented levels of access to crime scenes in return for not reporting anything derogatory.

Another fact: Chief Putney believes Officer Kerrick should have been found guilty. He all but said it in the press conference Q and A after the verdict. In response to a question about when Officers can draw their guns, he said, and this is not word for word, "Officers can draw their weapon if they perceive a potential deadly threat, but they cannot fire that weapon unless the person is armed and poses an imminent threat to themselves or others." This is NOT true. A person does not have to be armed to be a deadly threat and he knows it.

He also said that he had "No regrets" about the investigation and he believed the State's expert witnesses did "an excellent job" explaining CMPD's use of force policy.

He then went on to stress that people have the right to express their feelings and protest, so long as it is done peacefully and within the law. As he was speaking, people were breaking the law by impeding traffic on 4th street, causing traffic problems, as his officers stood by and did nothing. He set the tone for the protests at the very beginning. He could have, and SHOULD HAVE, simply asked those 6 or 8 people to move out of the street and onto the nearby courtyard. If they didn't, arrest them, open the road, and preserve the rights of the hundreds of motorists trying to use the roads. Instead, he let 6 people lying in the street trample the rights of the hundreds of motorists.

It is funny how 15% of our population controls our entire community!? Cops and barbers? Really! Have the same conversation in south Charlotte and see if the results are the same.
Why has Chief Putney not mentioned Officers John Burnette and Andy Nobles? They chased an UNARMED man were attacked and killed with their own weapon!!! Report how many Officers were killed with their own gun it will amaze you.
Wake up Charlotte voice your opinion and hold these city leaders accountable.