"In the criminal justice system, the people are represented by two separate yet equally important groups: the police, who investigate crime; and the district attorneys, who prosecute the offenders."


At least that's what the intro to Law and Order states.

In the real world it's not that straight forward when, the police and the offender are one and the same.

If you're following the Randall "Wes" Kendrick trial you'll notice that often it is hard to tell "who is who" since on more than a dozen occasions the witness for the prosecution turned out to be a better witness for the defense.

Yesterday the state called Mike Campagna to take the stand. You might recall that Campagna was once training director at CMPD,  and took the fall for trying to help Chief Monroe pass the state's BLET exam. Two weeks after someone leaked a plan to gather test questions in an effort to help Chief Monroe pass exam, Campagna was transferred to the watch commander's office (basically time out).

WCNC's report of the "highly inappropriate" event is here.

Campagna's been around a long time, but he doesn't have the sort of reputation that says honest and above reproach. The fact that Campagna would scheme a plan to help Chief Monroe pass the exam and then take the fall for the plan, points to a less than perfect witness who might be inclined to back the chief even when doing so would be untruthful.

It makes you wonder sometimes if  "The People" (the state, aka Roy Cooper) have thrown this case out the window and are just going through the motions.

It is clear from the evidence submitted so far that there is far more than reasonable doubt about the voluntary manslaughter charge.

Which may be why the "Outsider Agitators" have flocked to Ferguson again leaving Charlotte in the rearview mirror, and essentially declaring Jonathan Ferrell a "low impact martyr" with only his family and a small group of supporters rallying at Marshall Park each day.

At this point in the trial, so few things are in question it makes you question why the case ever saw the light of day. Obviously the reason the video was held from the public is that it shows Jonathan Ferrell on the attack.  The evidence shows the Kerrick was "back peddling" not for just a few feet but for a great distance.

So the question is the "level" of response. If following the CMPD directives on use of force it is very clear that the difference between lethal and non-lethal is pretty tight. Further more there is no guarantee that using a taser or impact weapon would not have been lethal. 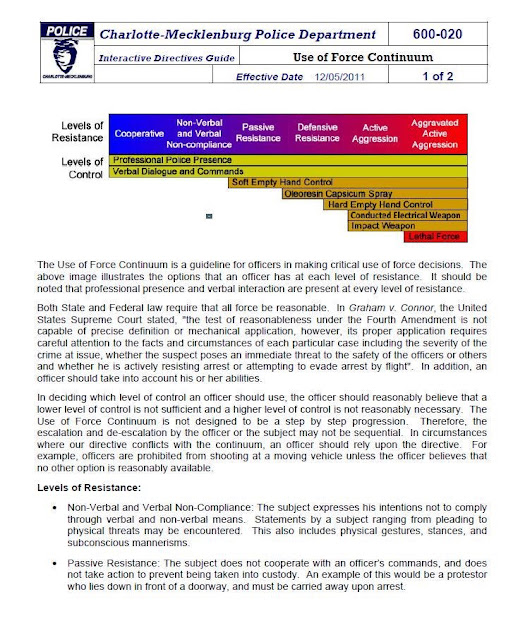 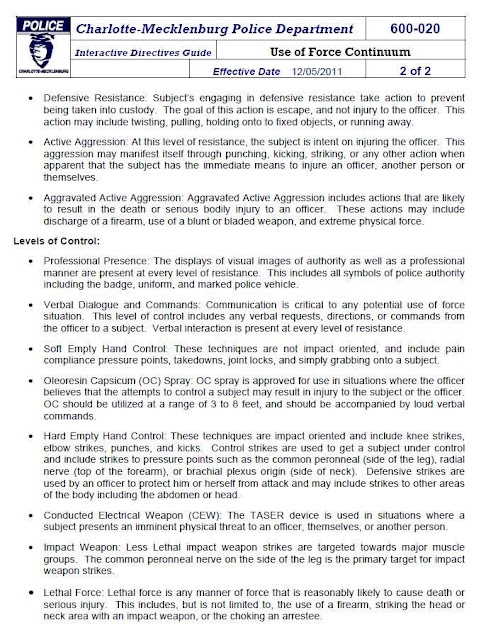 The entire case may come down to the fine line between Active Aggression and Aggravated Active Aggression. Did Officer Kerrick in the few seconds he had to react make the right call, given that a Taser had failed to subdue the attacker and that the attacker was in a head down full on charge?

why did the city stop covering Kerrick's attorney fees?

Way to go Campanga... You've been under the same bus... How quickly we forget....

Campagna is as pitiful as the rest of the current admin. You'd think that since he took the fall for "Rottney", he'd at least be truthful while on the stand and under oath. Funny thing is, Campagna once said, "The goal I want you all to strive for as officers is this...when someone asks another officer about you, their reply will be,'Yeah, I know them; they're a good cop.'" Well Campagna, guess you're all talk. You're a liar like the rest of the brass. I think Campagna needs to re-read the policy he wrote (supposedly). I do believe one of the criteria for deadly force is the subject is exhibiting extreme physical force. Given the physical dissimilarities of Officer Kerrick and the suspect, and the actions exhibited by the suspect, the criteria of extreme physical force was met. Therefore, Officer Kerrick was justified in firing his weapon.

Campagna the toady. In the end, the hope of promotion was too much for him. I'm sure he will get his 30 pieces of silver from the city

Anon 2:05. You are right on my friend... Just like a "Judas". Maybe he'll have the decency to go out with the same exit... Kerrick is innocent and you know it!! If a 250lbs plus man amped up on bath salts was coming after my gun, it's a no brainer....

Cedar:
Who are the 3 Majors they deposed from the civil side of the case?

How many uses of force has Campagna been in or how many times has he had to use a taser to make him an "expert" in the use of force policy? Or is it just because he helped write the directive?

Which directive? Which version? The only UOF directive that matters is the one that was in effect when the Kerrick incident occurred. No telling how many revisions there were before and after.

It became aggravated active aggression based upon JF's significantly superior physical capabilities in comparison to Officer Kerrick's. It is absolutely horseshit to say that CMPD adequately prepares officers to do hand-to-hand combat with the likes of JF.

The blood samples were destroyed so they couldn't test for pot,bath salts, etc.. Was that the CMPD lab that destroyed the samples? Or were they using another lab?

Judas Campanga. Time to leave like your pal Monroe... We've all lost respect for you. Don't worry, the real police will clean up the mess

How quickly we have forgotten what happened to Andy Nobles and John Burnette. Campagna is a POS.

Ole Campangna....don't worry folks I'm sure he has been and will be rewarded with a nice bonus for going to bat for the other brass who are trying to save their own butts. Bonus you say, yep, for those who are aware...Lt's and up are subject to get bonuses based on 'performance'. Don't worry though I'm sure none of that money could have been used to give officers cost of living increase or their step increases promised in the pay plan. And while on the subject what happened to 'Mucki??? Guess he finally goofed up so bad he and his captain, Campangna, couldn't cover it up.

Campagna is an ass-clown.

This article is all about Campagna testimony. Its pretty bad.

I couldn't have said it better myself about Campagna being an ASS CLOWN. He sold his soul to stay within the upper brass. I wouldn't have done RUTNEY any favors after taking the fall for him with the academy scandal. There is some type of kick back somewhere and also with him being out of the academy for so long. What does make him an expert on UOF? I have faith in George Lauren and Michael Green will turn this around and make Campagna look like the dumb ass he really is.

We will see if he makes that quick leap up the ladder soon. Major C... reward for a job well done.