If you tuned into WCNC late Saturday evening you might have thought the world was coming to an end. The number of "riot" tease spots leading into the 11:00 newscast was nauseating. Their tweet announcing "protesters fill the streets" immediately brought images of Ferguson and Baltimore. 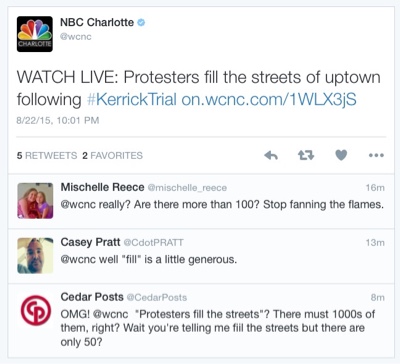 But when viewers tuned in they saw images of a handful of protesters running in the streets shirtless harassing motorists and banging on the hoods of cars.
Protestors shouting "No a Justice - No Peace" disrupting what should have been an enjoyable summer night for baseball and football fans uptown. Whatever their message is, it was lost in the disruption, and the noise. Rather than calling attention to the death of Jonathan Ferrell they were only calling attention to themselves.
Media reports of the "verdict" were flawed and rather one sided, most failing to recognize that the majority of jurors favored acquittal long after it had been reported on social media.
No Justice - No Peace - My Ass

The Kerrick trial jury deadlock is a very true representation of how this case was perceived by jurors. But who voted for and against acquittal might surprise you. Of the eight jurors who favored acquitting Officer Kerrick in the death of Jonathan Ferrell, one was black, one Hispanic and six white. Of the four favoring conviction, two were black, one Hispanic and one white.
Clearly the jury didn't buy into the race baiting media who continued to fuel the white cop versus black suspect scenario.
A mistrial is not a verdict, rather a simple admission that the high bar of conviction could not be reached. A mistrial is not a miscarriage of justice. In fact in this case it is really a truest reflection of the complexity of the facts and the overreach of the prosecution. Had the charge been involuntary manslaughter I imagine the jury would have had little trouble convicting the officer.
But these facts are lost on WCNC and other stations who focused their reporting on the "raw emotion" and passion protestors had for Justice.
The protestors, most who had no purpose other than a night of riotous misbehavior, wandered about uptown harassing police and fans at both Bank of America Stadium and BB&T Ballpark.
Yet WCNC, WSOC. And WBTV felt it necessary to give air time to these unintelligible street thug who claimed to support Jonathan Ferrell.
Shouting "No Justice - No Peace" and "Hands Up - Don't Shoot" apparently makes for good ratings.

I see where they are trying to petition Jesse and that other balloon head Al Sharpton to come and help the protesters protest... I'll bet money that they won't show... Why? Because there is no money in it for them... The city already paid out. So you see black community. These charletons done give a damn about you!! Wake up!!

The protests were mostly a non-event. The protesters were not very sincere and the thugs who showed up late in the evening wanted to do nothing but cause trouble.

But it should be said that CMPD's response was disappointing. There is absolutely no reason that the street thugs should have been allowed anywhere near Bank of America Stadium or BB&T Ballpark. Ditto for the Lynx Station or on any Lynx Lines, as well as the CATS Transit Station. Just simply declare those areas off limits.

unfortunately we have this little thing called "the constitution" - you can't just declare areas "off limits" for people. They didn't go on BOA stadium property, transit is public property. It just doesn't work that way.

I work uptown and for what its worth Saturday everything was much tighter. They kept the idiots out of the streets.

Wait a second, when did they say the constitution was "a go" again? I missed something.

@ 4:33 if they didn't have a permit you could have kept them from protesting anywhere.

And blocking traffic is legal?
They give tickets for loud noise and jay walking in David 1 and you think it's ok to let a half dozen idiots flop on the street?