The excuses are already rolling in, he's young, he has a lot of passion, he felt threatened. No we are not talking about Greg Hardy rather Cam Newton.

Most Panthers fans are a different color that Black and Blue, sure they cheer on the Panthers and a stoked with the 8-0 start but deep down, they are Steeler Yellow, Colorado Orange, they still have that Bears football jersey from 1999 the year they moved to Charlotte.

The trouble with this type of behavior is that no Panther fan is safe at any away game.  You can't have high profile people doing this sort of thing and have it not come back to bite you.
Newton defended his actions in the post game presser:

"We played in Green Bay last year, and I didn't see no 'This is Panthers Country' sign in their stadium," Newton said during his press conference. "I was passing. The sign was dangling. Either somebody was going to take it off, or I take it off. It's no disrespect to nobody. It's just more of a respect to the stadium. We all know gangs, we all know territories, we all know businesses. You're not about to sit up here and sell a Whopper at a McDonald's."

"It just doesn't match," Newton said of the banner. "No disrespect to any Green Bay Packer. It's just a respect thing."

Panthers coach Ron Rivera said he's spoken to Newton about ripping down the banner, but wouldn't elaborate on what he told the fifth-year quarterback.

Rivera said the issue is a "side story" and that it is "being taken care of."

Now thanks to Cam any fan with Panthers gear is fair game. Not that I'd ever wear Panthers beanie to a Steelers game in Pittsburg.
A little sub plot, apparently Newton was getting some push back right away for his stupid move, so he had his team mates try to take some of the heat in a "I'm Spartacus" way. 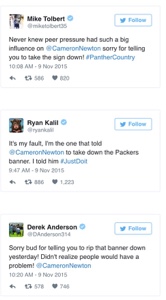 It didn't work so well.

GTFOH No self respecting player o any team is going to let his house be respected. For the first time he showed some real leadership. There are videos of players all over the league ripping down opposing team banners.... boo hooo

If Bellamy was there, he would have ate the cheese !

This is a non-story. Like someone else said, let them try to hang an opposing banner on the field in Philly or any other real football city including Green Bay. The only real story is security at Panthers stadium since supposedly no opposing teams banners are allowed??? If I wanted a HUGE banner, I would paint it on Bellamy's white shirt! That way I could cover up those stains...

I think the Charlotte Panthers should try harder to be like the Dallas Cowboy's and shoot the fans of the opposing team. If the Charlotte folk's will not allow banners to hang, maybe Charlotte will allow public hanging of non-panther fans. Or like maybe when you buy a ticket you have to promise not to cheer for the other team. Never-ever allow other team fan's into the home team's field. Cheese-heads have been keeping the the south down for too long!

Let the cats out!