Vet Attacked By Active Duty Marines For Being A Poser

Then there is this from WSOC:

A Vietnam veteran and two-time recipient of the Purple Heart said he was attacked Saturday at Charlotte-Douglas International Airport. 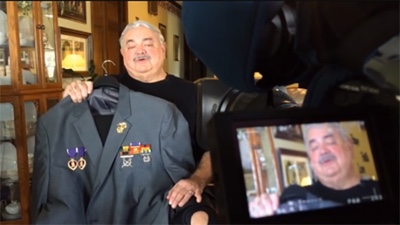 Jack Hughes, 66, said when he came home from battle in the 1960s, people threw rotten eggs at his uniform.

Vietnam was an unpopular war and he expected that back then.

He said he didn't expect to be assaulted by other Marines when he arrived Saturday.

Hughes, who lives in Gastonia, put on the jacket he wore Saturday with his medals and ribbons.

He cries thinking about the feeling he had when he said Marines at the Charlotte airport accused him of pretending to be a veteran.

"I just can't believe that one veteran or group of veterans would do that to somebody else,” Hughes said.

He said as he got off the plane from a Veterans Day event in St. Louis, another man, claiming to be a Marine himself, walked towards him yelling.

"Your ribbons are crooked. You’re a fake.  You are a phony," Hughes said the man shouted.

Hughes said he tried to explain that he earned two Purple Hearts in battle in Vietnam.

He showed Channel 9 a picture he said was of an officer presenting one of the medals in a hospital and telegrams to his parents, informing them that Hughes had been wounded in battle.

He said another man at the airport Saturday tried to rip off his ribbons.

Hughes said the man said to him, "I'm an active duty Marine.' And he just ripped the buttons right off."

He said the men were recording the encounter and taunting him with people watching.

He showed Channel 9 his VA health care card, but they insisted he was faking.

"I gave everything I had, for them to degrade it that way,” Hughes said.

Hughes said police finally intervened. He wanted the man who he said assaulted him arrested, but officers told Channel 9 it was a simple assault, which is a misdemeanor.

The officer made the other man apologize.

Hughes said that's not enough. He wants to make sure this doesn't happen to any other veterans.

Cedar's Take: Something Midshipmen at the Naval Academy learn right away is "Eyes In The Boat" the phrase lends itself to more than just sailing or rowing in an 8 man crew.

Public shaming of stolen valor idiots has become almost a daily event on Facebook so it's not surprising this would show up in airports. But doing so is not a Marine's duty, as any Marine Officer can tell you lead by example is a life long commitment.

Hughes deserved nothing more than a salute. If the active duty Marine didn't like his ribbon rack he had two choices, offer to help correct the error or simply keep his eyes in the boat and drive on.

Sad and shameful this stupid film-yourself-and-put-it-on-the-internet-and-think-later mentality has infiltrated those who are supposed to be our most focused, best and brightest. I thank all the military past and present for their braveness and sacrifices.

What the hell is wrong with the police that they are telling someone "it's just a misdemeanor" and so there can't be an arrest? Isn't anyone teaching basics to any police officers anymore? Yes, arrests for misdemeanors.

So either 10:51 is another idiot who thinks he knows police work because he watches cops, or he is a troll? I wonder which...?

Misdemeanors not committed in an officers presence…sorry u have to obtain a warrant first. To 10:51… you do not know your law , I hope you are not an officer. If you are, you will not be one for long.

Yeah, I know you have to get a warrant first.

But an officer can and should write a POLICE REPORT for someone to take to the magistrate to get a warrant. Or a police officer could assist contacting the magistrate to obtain the warrant. And if there's video inside an airport terminal (what do you think?) or taken by the offenders, officers can secure evidence.

Lazy cops don't want to do any of it so they tell people they can't have someone arrested on a misdemeanor. How about explaining the truth correctly instead of calling someone else a stupid troll?

Idiots. You don't know your law. I hope you are not an officer but I'm sure by the way your write that you are. Arrogant and condescending while being completely wrong. Step aside while the few good officers left do their jobs.

The officer was a retired hire back officer who knew better. He could have arrested them based on the fact that they may not be able to have been found later after the warrant was issued if they were active duty and leaving town. Or a citation could have been issued requiring them to come to court, but the hire backs do not have ticket books so that goes out the window. They (for the most part) do not take any reports they just kinda hang out and get their $25 an hour. He was also pretty lazy during his regular tenure at CMPD.

Everyone within CMPD are nothing but lazy POS. Which ranges from their so called leader PUTNEY, command staff, IA and patrol officers. They don't want to fight or deter the next crime because they will get thrown underneath the bus, due to having no back up. It is ashame how screwed up the department has gotten since we have two dictators KING RODNEY and PUTNEY. Everyone within CMPD can screw themselves because that is what they are doing to everyone within the department. I'm glad that I got out while the going is good because everyone can kiss my white you know the rest.

2:57, there are two sides to every story. If you were not there you don't know what you're talking about. For your information the officer involved was not lazy and he did do a report. He even tried to explain to Mr. Hughes how to get a warrant. It was Hughes who stormed off and refused to find a mature resolution to the situation. So stop talking crap because your ignorance is stinking up this post.