As suggested by CP the attractive 20 something was a Georgia Girl. In fact Smyrna is for all tents and purposes Atlanta. The travel time between Atlanta and the hits are all equal distant and her choice of smaller towns near major interstates made Atlanta a logical location.

All it took was to saturate the local media with screen grabs from the most recent video tapes and someone was bound to rat her out. 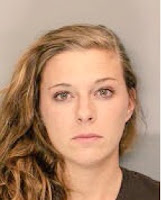 Sadly, Kemp is not a stranger to law enforcement as her 2011 mugshot shows.

The arrest of Abigail Lee Kemp comes just 5 days after a jewelry store was robbed in Mebane, near Burlington, North Carolina.

“As a result of multiple tips received by the public in recent days, a suspect in multiple jewelry store robberies across the Southeast region is now in FBI custody,” said Amanda Warford Videll of the FBI.

Kemp, age 24, was arrested without incident on Friday near Atlanta in Smyrna, Ga. by agents from the FBI Atlanta Division who were assisting the FBI Jacksonville Division with the investigation, Videll said.

More than $4 million in jewelry was stolen in the spree that took place over several months, the Jewelers’ Security Alliance told NBC News.

One other person who was with Kemp at the time of her arrest is also in custody, but the FBI did not say if that person was a man who was often spotted near the jewelry store robberies and whose photo was also circulated by authorities.

“Due to on-going investigative efforts, the identity of the second person, and the details surrounding both arrests, are not being released at this time,” Videll said.

Within hours of issuing a press release this week about the NC robbery, FBI Jacksonville Division began to receive numerous credible leads from the public, according to Videll.

“We thank our partners in the media who provided invaluable assistance by publicizing our need for information from the public,” said Michelle S. Klimt, Special Agent in Charge of the FBI Jacksonville Division.

In the Mebane robbery on Monday, the suspect is accused of tying up two workers during a jewelry store robbery at Tanger Outlets.

The incident was reported around 10:30 a.m. at the Jared Vault at 4000 Arrowhead Boulevard. No one was injured.

Mebane police said the woman showed a handgun and ordered the employees to a back room before tying them up with zip-ties. In previous robberies of jewelry stores, the woman also showed a gun and tied up workers at the stores with zip-ties.

The woman fled with an undisclosed amount of merchandise.
The same woman is believed to be involved in similar robberies in Florida, Georgia, South Carolina and Tennessee, police said.

Before the NC store theft on Monday, the last jewelry store she robbed was in mid-October in Tennessee, official said.

In October, authorities say the woman went into Reeds Jewelers in Panama City Beach, Florida with a gun. In this case, she told two store employees to go to the store’s restroom where she zip-tied their hands, just like in Sevierville, before getting away with more than $400,000 worth of jewels.

Police say she pulls out a gun and forces employees into the back where she then ties them up before stealing the jewelry.

The first robbery was a Jared in Woodstock, GA.  The next robbery was at a Zales in Dawsonville, GA. There she stole jewelry worth $13,000.

A week later a woman robbed a Reeds in Panama City Beach. She hit that one for $40,000.

The next store hit was a Jared Vault in Tanger Outlet Two in Bluffton, South Carolina. The thief was described as wearing a blue or purple striped skirt, a lavender and black brimmed hat according to WJCL.

Police are trying to figure out if the robberies were committed by the same woman.

The methods are similar and all the stores that were robbed were chain stores at large retail shopping/ entertainment plazas.
Posted by Cedar Posts at 6:16 PM

Coal burner got caught. Now she gets to roll on her posse, endanger her family, and then enjoy all the friendliness of a sweaty stanky southern jail cell. Her looks will do her fine in the big house but she'll plea down and do less than 3 years. The justice system is a sucker to female crooks especially if no one was killed. Wouldn't be shocked if NC dropped the charges and let another state prosecute since thats how we roll.

Seriously naughty girl needs some major discipline. It's a tough job, but I'd volunteer to do the hard work ;)

If I'm on the jury, I vote "not guilty" by reason of hotness.

Upon consulting the 'penial' code, it looks like hard time

Federal crime of Hobbs Act robbery. She is screwed, probably get offered a 30 year plea. Fed time she will do about 29 years and 6 months. So long hottie!

Yo Cedar so whats up with this girl? Just crazy? With looks like that she could have used that money maker of hers to the max and made far more money with 1/1000th of the jail time risk. Call it the power of the vajayjay.

Abby is hot the entire story doesn't make sense. She can't be that stupid. Maybe it was all just too easy?

Just federal charges, how about armed robbery in each state? After she sells her movie rights, civil suits from frightened employees who were mentally injured with PTSD, loss of concentration, loss of sleep, loss of affection, loss of wages due to inability to work?

Funny. Usually a Cedar post about a serial armed robber or robbers getting caught is followed by remarks about 'thugs' or 'animals'......or worse.

8:25 you're correct. But she was a violent thug criminal who chose to use a gun, kidnap, and rob in a classy jewelry store while allegedly looking good, right? So that makes it better. Kind of like being a whore who calls herself an "escort" is often referred to as a "high class call girl" if she gets paid lots of money to be degraded and used sexually by strangers and takes money for it, but if she does it for less money and maybe in not-so-nice clothes, she's called a prostitute, etc...

While on this topic, can we take "career criminal" off the table? How about life-long criminal or just repeat offender? It's not helpful to try to legitimize crime in any way.