Odd Tales From The Internet A Crystal Lagoon In Charlotte?

The story surfaced on CharlotteStories.com over the weekend.

The CEO of Crystal Lagoons just left Charlotte after securing a deal that he hopes will be finalized over the next few months. The deal would be for the company to build a massive new ‘crystal lagoon’ and water-front development right here in the Queen City.

The company has now announced a total of 11 projects in the U.S., after it has already started 300 other projects around the world (including in Dubai).

The artificial bodies of water are built using proprietary ultrasonic and “disinfection pulse” technology (similar to the technology used in ultrasonic jewelry cleaners) to purify water with very limited chemical output and energy intake. The resulting water is extremely clear and blue, building an amazing platform for waterfront dining, housing, and recreation. The ‘crystal lagoons’ also come with white-sand beaches and docks for boats and jet skis. 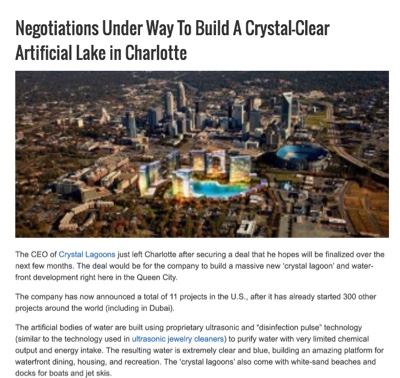 So here's the giveaway "The Company has now announced a total of 11 projects in the U.S., after it has already started 300 other projects around the world (including in Dubai)."
So 300 plus projects have been started to build these giant ultra sonic jewelry cleaners around the world.  Yet no where on the company's web site or anywhere else are there photos of completed or even under construction projects.. 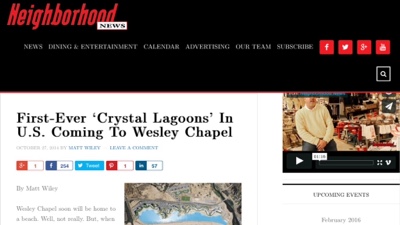 There are a couple of announcements in small blogs and on line news sources.
Cedar could be wrong, but it has all the hallmarks of a scam, much like the reported Titanic II cruise ship under construction in China for an Australian "investor" that pops up about once every 3 years.
Let's just hope The real estate investment geniuses on Charlotte City Council don't  hear about this.
Hat Tip to Bill Fehr for the holy sh$t alert!

If City Council sees this, there will be a push to have a crytal lagoon at each housing project b/c it just isn't fair that only rich white folks have crystal lagoons. Drop one of these beauties on the new Taj Mahal of housing projects on West Blvd, and watch the fun begin....a drowning a week.

7:43 is right. Those idiots and Mayor Jen! would be all over this. But I'm with Cedar this company it totally bogus. The company web site is nothing but cut and past low quality artistic (5th grader) renderings. I'm not sure where the information came from but only a fool would think it is a real deal.

12:09 Normally I'd believe it if I saw it in the Charlotte Fish Wrapper. But now days nah. Ely's story is the same as CharlotteStories.com apparently straight from a press release. I'd be inclined to believe it if the one in Dubai actually happens and works.

For reasons that seemed sensible at the time, Charlotte wasn’t built close to its local waterway, the Catawba River, and that left it high and dry, so to speak. An artificial lake isn’t all that bad an idea, but would it work? Central North Carolina has an embarrassment of riches university-wise, and wouldn’t it make sense to make use of their people? Shouldn’t the city do a feasibility study before jumping into something else? Everyone is aware that experts are under a great deal of pressure to agree with the people who hire them – otherwise they wouldn’t be hired as experts again. But there are a lot of questions they could answer. First of all, would the cleaning method the company proposes even work? If so, how much would the lake and cleaning system cost? What would the ongoing expenses be? How would it be paid for. Where would the water come from? Would we wind up with a mosquito-infested mess? And what about Cedar’s point that there’s nothing out there showing completed projects? All of this counts, but I have a feeling that in the long run, none of it will matter. We’ve already learned the hard way that if the powers that be want something, it will be built, even if the voters vote it down.