Somethings are just wrong. Accidents happen, and unfortunately when it involves automobiles sometimes people are killed. It's the blunt force trauma that gets you, normally a head or chest injury. 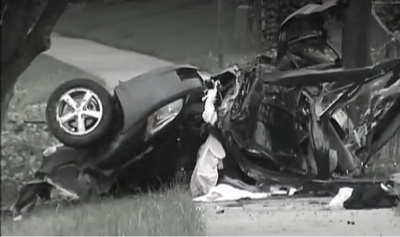 But when it happens to young people it is always troubling.
Early Saturday morning a Honda Accord moving at a high rate of speed left the mist covered and slick McKee Road road in South Charlotte. The small car slid sideways across the lush grass shoulder and hit a fairly small tree splitting the car in half.
The 17 year old driver was severely injured the 14 year old passenger riding next to him would die at the scene within a few minutes. The three girls in the back seat who were not wearing seat belts escaped serious injury, with only one remaining hospitalized Saturday afternoon.
CMPD stated that neither drugs or alcohol appear to be factors.
Speed, the slick well traveled road and darkness at 4 am combined with an inexperienced driver however seem to be the logical cause.
The question, do these kids even have parents? In a world on instant communication why did their parents not know where their children were at 4 in the morning?
Posted by Cedar Posts at 7:51 AM

I'm sure the parents of the 17 year old driver will be paying for this the rest of their lives. Since booze doesn't seem to be an issue at least there won't be prison.

But Cedar is right where are the parents in all of this. Who let's their 17 year old drive around at 4 am?

I get the need or desire to blame someone other than the kids... but something tells me the parents didn't have a clue, as they were probably asleep.

Do you blame your parents for that too?

The lack of parenting skills is shocking. Sure we all slipped out of the house as teenagers. I did it every night for an entire summer, walked from the 13th hole to the 3rd hole at Raintree for a girl named Becky.

My parents suspected nothing, my car was home, my bedroom door closed. Technically I was in bed by 11 and up before dawn. The perfect son. Keep in mind my parents lacked the technology of today. Its 2 am do you know where your kids are? Simple "Find my iPhone" that's all you need.

But this in your face parenting failure. This is learned behavior. Parents who are absent, their lack of supervision, kids who are void of boundaries, just as bad as parents who leave their toddlers in a locked car.

Sad story, but I don't think this was a case of kids running around in the middle of the night. Hearing they were leaving to go out of town on an early trip, but I'm sure the details will come out, not that it matters.