Ruben Studdard - I'm blessed that I live a varied life of ever changing events and venues. Because of this, over the years I've meet a long list of celebrities. While I've never sought an autograph or a selfie, I have made some mental notes.

Some I've been impressed with, Stevie Nicks her ability to sing while being stoned to the bejesus, John "Cougar" Mellencamp for his ability to throw a football on a beach in Hilton Head years ago, Jimmy Buffett being just another guy on the docks.

Some I've not been impressed with, Sylvester Stallone pushing his way to the head of a lift line that was with five year olds and a couple of ski instructors in Beaver Creek. Mariah Cary, over medicated diva stomping her feet on deck because Charleston's 4h of July fireworks didn't start when she wanted them to. Pierce Brosnan dumping a plate of food on the floor because the food was cold.

And along comes Ruben Studdard, who gave 22 minutes performance last week in the tented parking lot of the Mayo Bird - Summit Room on East Blvd. 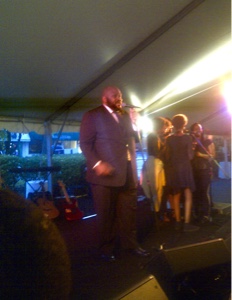 During the charity event the former American Idol winner belted out a few covers and a couple of gospel classics. The man has an amazing voice, but decided to cut the event short when the mostly white crowd gave him little more notice than a night club singer.

Ten minutes later, the beast of a man lumbered through the parking lot, sweating profusely even though the temps were in the mid 70's, with his small posse trailing along. Ruben apparently wasn't one for selfies with the two young fans standing nearby nor up for idle chat only grunting in acknowledgement after an expression of gratitude was offered.

Perhaps the half dozen people standing curbside echoed the state of race relations in this country. I'm white waiting for the young black valet to bring my Lexus SUV around the corner the lines clearly defined. The parking and valet service was free so I expect my $10 tip didn't not make up for the masses who won't tip as the night goes on.


I don't blame Studdard for being annoyed since he received little respect, no standing ovation and clearly more than half the crowd wasn't even listening. It was an embarrassing moment in an otherwise fun evening.

Just Shoot Me - Piper Glen Women's Club Flyer promoting an upcoming social event - Bill Cummings Trio - "Swing into Summer Concert" there will be dancing in the aisles, a raffle and sing a long. Tickets $40 per person 6:30-10:00.

Please someone take my gun and just shoot me if I ever get so old that I think a senior sing-a-long on a Friday night would make for an epic night.

CMPD Life In The Fast Lane - I guess police cars are exempt from the rule that requires 2+ to use the I-77 HOV lanes? 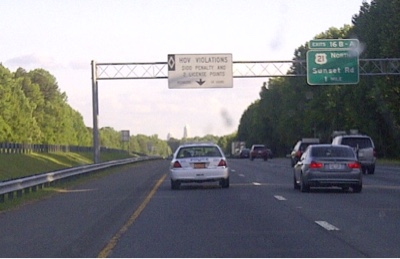 This no doubt "take home" car, entered I-77 south bound at Huntersville promptly hit the HOV lane and never looked back. He traveled the entire length of the HOV lane before getting off at I-277 Brookshire Blvd and heading on to the Law Enforcement Center.

Funny thing traffic wasn't heavy but he did keep it under 80.

Direct from the Federal Department of Transportation. It's always best to know your facts before running your mouth, but that never seems to stop you.

Hey 7:56 I realize you probably failed 5th grade reading comprehension but Cedar said at the start that he guessed police were exempt from the HOV Lane 2+ requirement.

Cedar stated that he guessed and ended with a question mark, meaning he did not know the facts. Then he continued on to criticize the officer. Apparently he is too lazy to learn the facts before commenting so I provided the facts for him. I hope this simplifies it enough for you. You keep trying though little buddy, you'll get there someday!

It was Bellamy.... He heard that the 7-11 was selling hotdogs, 3 for the price of 1. He had to get there before the mustard ran out.
A man has to have his priorities !

Hey 5/20 at 7:56 p.m. I know I'm late to the party, however does the exemption also include the BUS LANES down 74? Can't tell you how many times I see marked and unmarked vehicles breezing right through traffic. 9 times out of 10 with no lights or sirens. Must be nice to have a badge and gun there to justify your actions.

Confession? I sometimes secretly hope that a bus will plow right into those jokers to show them that the bus lane is FOR BUSES.

I'm not sure I can ever go back to any other place, after an experience like this. This place is appropriate in a space that lends so much gravitas to events. The design of the lofty spaces is sharp and environment is unbelievably good.

It does not really matter whatever federal guideline "suggest". According to NCDOT emergency vehicles can only use the HOV lanes without proper occupancy ifthey are responding to emergencies. It, along with the bus lane, are not simply LE express lanes. Any other use of the lanes would be in violation of the HOV laws(§ 20-146.2. Rush hour traffic lanes authorized.)

Some officers go out of their way to fulfill the public's expectation of what the true purpose behind the badge. It's pretty simple respect others, drive like you have had your license for more than 10 minutes, buckle up, and get through your 30 years and make sure that the person looking back in the mirror is someone you want to come to your mother's house if she needs help.