Pastor Chris Ayers is upset someone would vandalize (edit) his sign in front of the Wedgewood Church on Tyvola Road. Odd that Ayers Church that boasts about being all inclusive would promote the racial divide of the Black Lives Matter crowd. 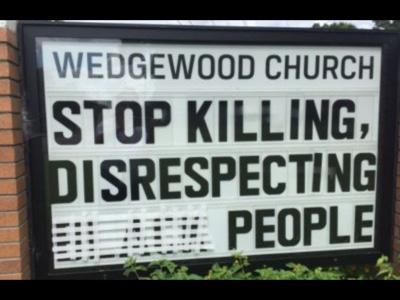 Cedar's Take: The original messege "Stop disrespecting black people" misses the mark on so many fronts.
For the past 5 weeks this mess has stood in the middle of Sharon View Road just east of  Mountainbrook Drive in the SouthPark area. 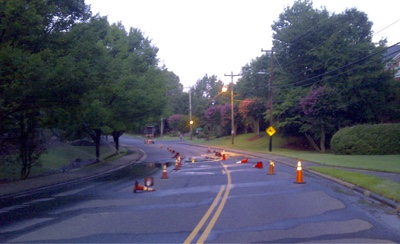 Sometime during July a small sink hole had formed in the middle of Sharon View Road. Charlotte's DOT street crews quickly fixed the problem by placing two steel plates over it and creating alternate traffic lanes around the damaged asphalt. They even added a lighted self powered directional arrow sign.
What they didn't do was mention to CMUD (now the prefer to be called Charlotte Water) that there was a water main leak in the middle of Sharon View Road. So for the last five weeks, water has been slowly gurgling away under the road. Thousands of gallons off water streaming across the pavement while car after car drove by.
Odd, given the thousands of cars that travel the road each week, countless residents who run and walk their dogs past the always wet street and no one through the to call Charlotte Water and say "hey y'all know there's a water leak over here?"
Cedar's Take:  We've become a city of zombies noticing nothing and assuming everything, believing big brother has got it all covered. We are doomed.
Cedar's Update: So on Sunday I tweeted the above photo and Monday AM, Charlote water responded with "where is this?" A few hours after providing the location another tweet, "thanks our crews are on the way". 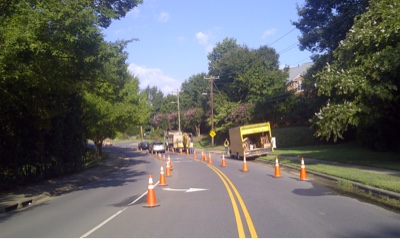 And sure enough this morning the flow had stopped and a track hoe had removed 3 dump trucks of rock and mud. A hole 20 feet deep and they were still digging.

Odd Encounter - So I'm in line at Chick-fil-a. One, of those line up around the building busy lines that happen at the chicken sandwich fast food icon at noon each day. In this where the lines merge from two different durections.
Everything is good, one car at a time everyone is letting one car merge into the line. When it comes to my turn to get in line, this 30 something woman in the main line is having none of this pattern of cooperation and politeness.
So after getting inches away from her car it's clear she's not going to yield. So I wave her on and silently hope she chokes on her food.
I continue to follow along behind Miss Rude as the line slowly circles the building. Apparently guilt started taking its toll, because when I get to the window to pay I'm told she bought my lunch.
What the ???
Posted by Cedar Posts at 3:35 AM

Six or seven years ago I called to report a pretty strong water leak on Park South drive next to the fire station. The 311 operator asked for an address. I told her I didn't know it but there was only one fires station on Park South Drive. She said she couldn't take a report without an address. The leak continued for 3 more weeks

Add insult to injury the Fire Chief Lives off of Sharon Road and goes that way to work everyday. Why didn't he call someone at the water dept?

The Fire Chief doesn't reside there any longer......

Your right. In the last year two of his longest time friends have been forced to retire because he wouldn't admit quilt now his wife has left and took the house but I feel sure he is still saying he's winning because he is still the chief. But it looks like he has promoted a Gaston County Volunteer Fire Chief to Deputy Chief that has most assuradley knocked his old buddy out of the job for good all together. One thing for sure the PD sure is a better place to work these days comparatively speaking anyway.

She's not that squeaky clean either, she moved onto someone else in City Government....

The scandalous personal lives of the city. Women always trade up no matter what the man is saying. So the names floating probably are not quite right. But that would not be hard in this case, trading up I mean!!!

Keep your ear to the rail, you would be amazed what you hear.