Nothing Says Long Hot Summer Like A Race Riot Except....

Call it what you like, a gathering, protest, unrest, riot, or "race riot".

A prefect storm of conditions came together to give Charlotte its first all out riot in, well actually Charlotte's first real riot ever.

Think about that, first real riot EVER!

Not during the turbulent 60's or strife littered busing and court ordered integration days of the early 70's has Charlotte has a real full blown riot. 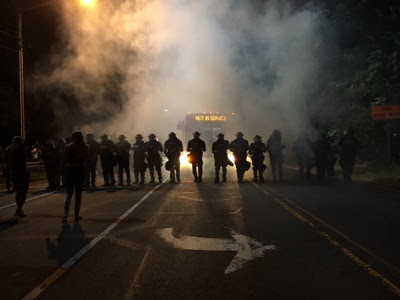 Charlotte has been void of riots, so of course CMPD was quick to declare that "Outside Agitators" had arrived.

Outside of where? They certainly did just drive down from Baltimore or catch a bus from St. Louis? Did someone charter a plane and fly a bunch of trouble makers in from the west coast? When did the "Boyz" from Compton decide that they had to come to Charlotte?

Sorry Virginia there is no Santa Claus, and Charlotte's night of mayhem is not magic rather it is a big thank you for all the transplanted thugs and hood rats who have migrated to the queen city due it our very generous welfare and social needs programs.

"Come to Charlotte free stuff for your entire family and... we are close to WalMart." "Yo GTG we be heading to Wally Mart right now gonna get me a 60 inch flat screen tonight!"

So where are the "Black Leaders" when all hell is breaking out on the streets of North East Charlotte?

Other than a timid tweet last night the Mayor Jennifer Robert's is talking about HB2 and the tranny bathroom cause and not calling for calm.

After a night of violent protests in Charlotte, chief Putney tried dispel rumors about what happened to Keith Lamont Scott.

Scott, a father of seven, was killed by CMPD Offices in an apartment complex parking lot as officers looked for another man named in a warrant they were trying to serve.

His family said Scott, an African-American, was unarmed and sitting in his car reading a book, waiting for his son to come home from school.

But Charlotte-Mecklenburg Police Chief Kerr Putney said Scott exited his car with a gun, not a book. The Chief said officers couldn't find a book at the scene. "It's time for the voiceless majority to stand up and be heard," the police chief, who is also black, said Wednesday. "It's time to change the narrative because I can tell you from the facts that the story's a little bit different as to how it's been portrayed so far, especially through social media."

According to the CMPD Chief: "We found gun, not book" CMPD Chief Kerr Putney has stated that both evidence at the scene and witnesses support police claims that Scott was armed.

According to MSM reports Officers repeatedly told Scott to drop his gun, when he did not comply Officer Brentley Vinson shot him.

Keith Lamont Scott died of his wounds on the way to CMC Main.

Here's where it gets murky, Putney who is often described as an "Uncle Tom" said he was not certain whether Scott pointed his gun at officers because wait for it "; Vinson was not wearing a body camera at the time". Seriously you've got to be kidding? No body camera? Wasn't that the big budget item approved by Charlotte City Council in the aftermath of the Jonathan Ferrell shooting?

CP is hearing however that Scott is seen exiting the car with a gun in his hand on a CMPD dash cam video.

Cedar's Take: They best release the video pronto, I don't give a rats ass what the state law says. Release it or else all hell will continue.

If they don't release it I can only say we are again left to question the transparency of the Charlotte Mecklenburg Police Department. And the thugs capitalize on this lack of openness.

At least Officer Vinson wasn't thrown under the bus just hours after his deadly encounter. I'm sure race had nothing to do with that decision. Right? Right?
Posted by Cedar Posts at 4:32 AM

Doesn't matter if the videos are released or not. The thugs (protestors) already have another golden ticket to Walmart for free stuff. In the meantime I have an excellent idea on dispersing the gathering herd of animals. Instead of throwing tear gas at them, throw job applications at them..... They will run for their lives!

At Midnight, Central Time, it's a couple of minutes where I am into Sept 22, 2016: Have been reading many many Tweets on Twitter about the Charlotte riots. Fox News said they were pulling all their units out. Note in one Tweet that there is obviously no plan or prep at all in place to deal with this kind of situation. Sounds like there is a full-blown war in progress. Wondering what the morning light will show? Wait & see.

The news reporter that gave the family member a platform to spread the lie that "he was reading a book" should have some responsibility in this mess. that could have been easily verified before it was aired. Who was that reporter?

Cedar, really? I used to think you had some sense and I know you don't really believe that releasing the video will change anything these people are doing, you can't. Do you think the subjects you observed last night or the night before give a shit about the truth here? It is crystal clear that they are just our local thugs having the time or their lives in a relatively no consequence atmosphere. This will be the highlight of most of their lives, this is their "fifteen minutes" and they are going to take full advantage. More lives will be lost before this is over and more property will be destroyed but hey, animals will act like animals.

Shut down the short buses (CATS). That should significantly dwindle the flow of Hood Rats getting into uptown....

I blame Jennifer Roberts for waiting so goddamn long to accept the State's assistance with the Nat'l Guard.

10:49 - I don't know about sense but you are correct, doesn't matter what the video shows any excuse to riot and loot is good enough.

That said, releasing the video will reassure the rest of us that we aren't killing black people just because we can.

"Killing black people just because we can" Are you kidding me with that garbage? Where do you live again, when in the hell have the police in Charlotte begin killing black people just because they could? I guess i missed that little in the history of the police in Charlotte. I sure remember the last shooting where a man charged and tackled an officer causing him to be shot and killed. Here there is CLEARLY a gun at the subjects feet. There is a photo on social media that was not taken by the police but of a bystander and it clearly shows the firearm. I missed the book in the photo the family is talking about.

This is a sad situation, but does anyone understand that you do not get out of a vechicle with a gun with police prescence, and expect a good outcome? I just can not believe that some USA citizens think they can get out of their vehicle, while being stopped by police officals, and expect a good outcome from this type of situation. More citizens should have better common sense, much less, take a concealed/carry class. It is very hard for me to understand that some people act with such dangerous and reckless attitude. The law enforcement agents can not read your mind upon inital encounter, so I always think better to be safe than dead.

Releasing the video will not solve any of the problems. Unfortunately everyone's mind is already made up at this point.

A lie can travel halfway around the world before the truth can put its shoes on.

About the book. It wasn't exactly a book. It was a magazine.... with a trigger and barrel attached.

The Mayor, although a bit on the brilliant side, was acting on commentary and advise from her City Staff, Chamber of Commerce and Specifically her Homeland of Security Director. All of them told her how bad it would appear if the National Guard was here and not one of them showed their face out in the streets where it was going on, not one!!!