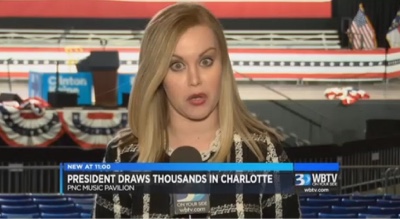 
This is amazing watch the on camera start and end of Sarah-Blake Morgan's report of Barrack Obama's visit to Charlotte. How many time does Blinky blink? Got me I lost track at 28 times in 30 seconds. The video may also still be here.

A few weeks ago, I got a lot of grief for picking on Blinky's "Bride of Chucky" look when she interviewed CMPD Chief Kerr Putney. Maybe that was a little harsh, and I should have just poked her in the eye because of her soft ball questions regarding the sharp increase in crime and the department's response to the Keith Scott protests and riots. 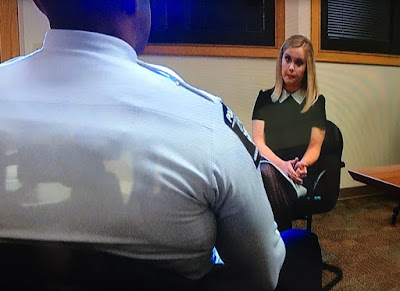 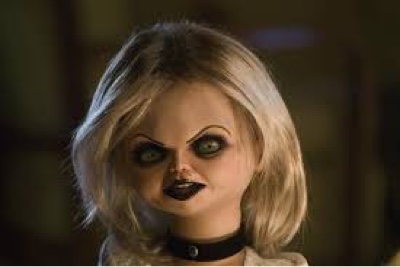 After all, what is really scary is the local media talking heads who let former CMPD Chief Rodney Monroe promote his phony crime stats for years. These are the same reporters who are now blown away by the sudden dramatic rise in all types of crime.

You'd think they would figure this out.

Now I do give props for Blinky standing fearlessly among the rioting masses during the pointless Keith Scott shooting protests, that took some nerve or maybe not.

So back to Friday's POTUS Visit: 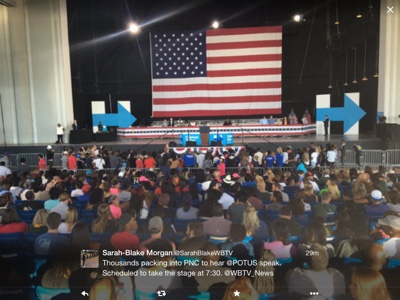 So when I call her out on this embellishment her response is to block me on twitter.

Maybe I was too mean to point out that her math skills were lacking. But clearly she was before the event started, planning to promote the local DNC message of "thousands".

I know it should all be good news. 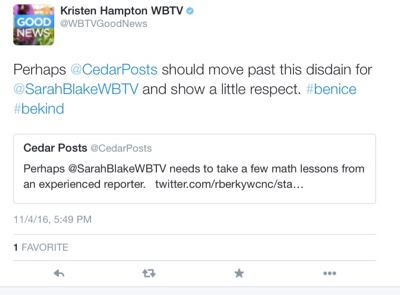 But if Sarah-Blake Morgan she was a real reporter she would have noted that PNC Pavilion holds 19,500 guests and that while the Mecklenburg DNC reported 8,500 attendees, CMPD's count was around 5,200. These sort of things always have crazy amounts of no shows. Which... 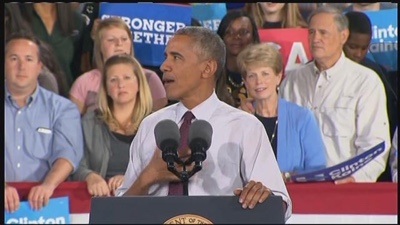 I'll admit she steered clear of the DNC claim that the event brought together people from all across the state, when she pointed out that the crowd, unlike the above screen grab, was mainly "young and African American".

Yes the white folks behind the President are selected to stand behind him because they are wait for it.... white.

Kristen Hampton further responds to my calling out by saying Blinky is a "great story teller". Maybe that's true, if so she Binky might want to stick to writing fiction.

Otherwise she's no better than these two from ABC news who added crime scene tape for dramatic effect to their live shot. 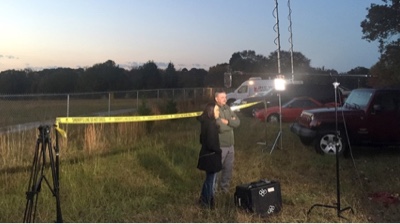 By the way, the above photo was tweeted by a competing news crew from CNN, proof that there is indeed "no honor among thieves".

Perhaps more telling was this idiotic Halloween post of both Blinky and her husband fellow WBTV reporter Nick Ochsner. 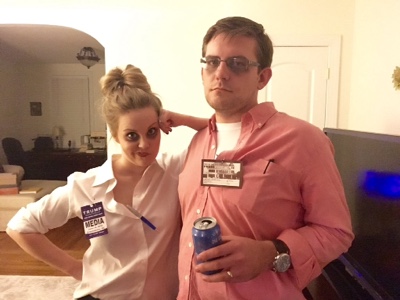 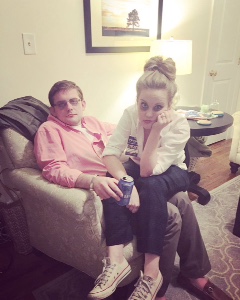 Yep they actually dressed up as sleep deprived reporters covering the election and the presidential candidates.

OK I give, its kinda cute and pretty funny.

Cedar come on man chill, she has a disorder and its not something to make fun of, or be cruel about.

She has a very serious case of "dipshitititus" its highly contagious will spread like crazy throughout WBTV before long.

Is there any news personality in Charlotte that you like?

She's young stupid and you need to lighten up Cedar. I don't think she was deliberatly misstating the facts maybe just caught up in the moment.

OMG Cedar I never noticed! How the hell does that poor girl drive a car? Is it a medical condition? Seriously I'd be concerned.

CLT media is a lost cause. The riots proved that. Blocking on twitter is the reflex move of the incompetent who know they are incompetent. So of course Rick Thames blocked me when I called out TCO for repeatedly making a white cop the face of the Keith Scott shooting in front-page images. That vile and dishonest act I know for a fact was not well received by everyone in what is left of Thames' newsroom. Nor was the refusal to put the cogent and remarkably well-done considering the circumstances TCO profile of Brentley Vinson out on the wires for maximum distribution. In fact, if WBTV does not run the story, kicking off reciprocal use by a couple dozen local TV stations, NO outlet besides TCO sees it.

It should have been in 100s if not 1000s of outlets worldwide. Search on "Brentley Vinson" and 72K hits. The lede from that story, only a couple dozen -- again almost all from local TV news ops -- before the search falls apart.

Haters gonna hate! Thanks Cedar for not letting me down.

Rick Thames is a joke as editor of a newspaper. He is not impartial. He is not capable of behaving as the fourth pillar of democracy protecting democracy with truth and investigation. He is a sellout for reasons that are difficult to understand. For the "glory" of being a local bigwig in the t.own of Charlotte, NC? If anyone looked to the newspaper or other local media for journalism anymore, I would say he should be ashamed. We are past that time thanks to editors like him who won't present the truth and allow corruption to run rampant.

Not sure when WBTV hired "Blinky" or her idiot husband but they are about as immature as they could be. I often wonder if I'm not watching the CCTV channel at East Carolina. I don't think they could dumb it down anymore, but just as I say that they'll hire someone even less qualified.

speeding ticket? no arrest. good grief. why are you all being such asses about this woman personally?
If you have some complaint about her reporting, just state what the complaint is and back it up. Isn't that what you are complaining she didn't do correctly? And maybe her eyes are dry from working hard. Instead of sitting at her keyboard writing nasty childish insults. Don't like her dress? So what.
Stop attacking her like bad children.

There are plenty of examples of terrible reporting, missed reporting, foolish reporters to choose from in Charlotte. There are almost zero examples of good ones. Why not be comprehensive?
Are you really this upset because of a possible sloppy crowd projection at a DNC event during a live report? I don't support DNC and think most media is slanted to make false claims on their behalf, but good grief this is excessive.

I've got to agree with Cedar and I seldom do but Sarah-Blake Morgan is one dim bulb.
What person has a hyphened first name?

I hope you crawl back under your collective rocks. This bashing is just sick.

There is a lot of so so on air talent in Charlotte but its not at WBTV. The better talent moves on the lesser hangs on. For SBM this is the end of the road. As good as it gets. Her on air persona is as creepy as Chuckey's Bride, her reporting style is fine for middle markets but won't play beyond Charlotte.

Fox hired away the best talent we had, CNN took DG, and MK, and NP has also moved on.

They can't afford to keep great talent so they stick with novelty acts.

Cedar your still a rude troll but you're right she's just godawful!

I think they canned her last week. Haven't seen her nasty face on camera all week.

There is a drive to replace the long standing on air talent with fast talking Yankee and Mid-Western types. When was the last time someone said Y'all during a local Charlotte news cast?

Not since Fred Kirby I'd guess.

Catering to a diverse ethic group to build ratings is nothing new. That slab of ham Brigitta Mack is there to appease the west side crowd.

Some are so hard to understand only someone from Ohio could stand to listen to that rapid fire weather chick.

I'll guess Keith Larsen was canned because he had become too local.

Grow up Cedar, she was a good reporter I'm sorry to see she was fired. Hope you are happy.

If you can't get the facts from wbtv watch another station. You talk about Blinky when you're Whiny

Of course I never wanted her fired. I suppose WBTV management saw the same things I was seeing. As you can see I didn't post her arrest record. I don't think peoples past should be used against them in that manner.