Few things grind my gears more than inefficiency and incompetence.

And there is no better way to get a good dose of both than to have two government entities try to work together on a small project.

Case in point the traffic signal at the Rea Road and Piper Glen Drive.

Beside the 10 years its taken to get the request approved, which in itself is nutty, the never ending delay on a local level is astounding. 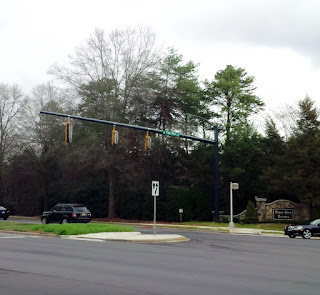 Surveys, traffic counts, community meetings, planning and so on, plus billing the Piper Glen HOA for the traffic signal upgrade took months.

Once the approval and "green light" was given the real stupid took over.

As CP hears it the trouble is the State of North Carolina is responsible for Rea Road and the City of Charlotte for Piper Glen Drive.

The City required handicap accessible crosswalks, this alone was the source of several "do overs" as contractors struggled to get the grade "just right" and up to city standards.

The process ran from spring into summer and on into fall. Then the state required that the intersection be repaved so they had the entire intersection repaved and decide oh what the hey and repaved the entire length of Piper Glen Drive, doing a pretty shabby job in the process.

The Floyd S. Pike Company came out a dozen times to set the poles, conflicts with cell phone small towers provider Crown Castle and then Google Fiber and AT&T fiber lines were addressed and finally back in October the poles were up.

By Christmas the lights were up.

By New Years they painted some of the crosswalks

By January 15th the signs were installed. 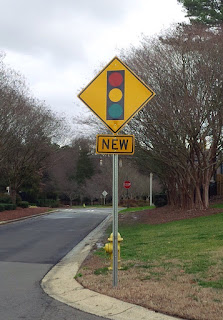 This alone was an amazing process. One day they installed the metal post, a week later they added the small "NEW" sign another week went by and the added the signal ahead sign, but had to reinstall one of them because it was upside down. Note to City Staff don't let color blind people install these signs.

The work came to an halt when engineers noticed that the east bound Piper Glen traffic which had a left turn protected permitted signal didn't have a turn lane. 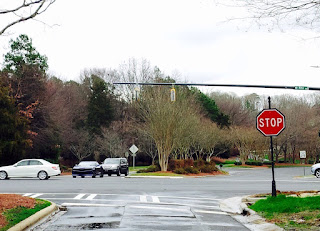 (CP Update No. 3: CLT DOT was kind enough to "educate" Cedar Posts that the MUTCD Code requires two traffic signals. Which means the delay was not due to the one lane - two signals as noted above. See Photo Below Courtesy of Charlotte DOT) 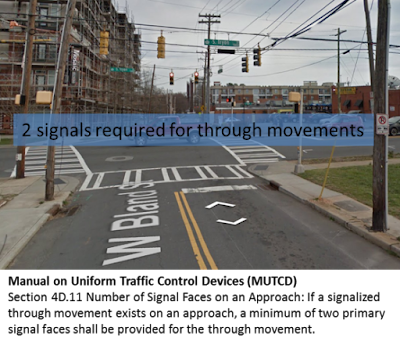 So here is it the 25th of January, two city trucks with their lights flashing are parked again at the intersection, and with the trucks four guys standing around trying to figure out where to have lunch all the while collecting a nice paycheck as I once again dodge speeding cars.

Cedar Update No. 1: According to sources it may not be the City of Charlotte who is to blame for the most recent delay. Seems it is Duke Energy that is behind schedule and that it is just the simple process of turning on the power.

Cedar Update No. 2: (January 27, 2017) Apparently CP sources are correct the hold up is Duke Energy who this morning stated the the power meter will be "set" on Monday. Which translates into at least two more weeks the traffic signal will remain non functional.
Cedar Update No. 4 (January 27, 2017) City employees back on site finishing the crosswalk marking that they started 3 weeks ago. Guys told me they ran out of paint and had to come back today to finish. 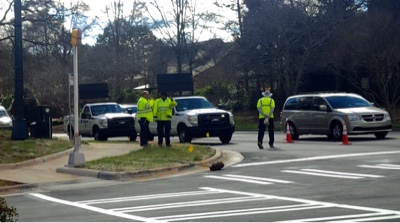 I will check back later today and see how it all worked out.

Ah you whine and cry. This is nothing more taxes can't fix.

I've been wondering what the hold up was, should have figured Vilma Leake was on the committee