To be honest Jennifer Roberts has absolutely zip to do with traffic enforcement or traffic signals in Charlotte. She's far too busy preaching about diversity, inclusion, and protecting the bathroom rights of a dozen transgendered nut birds. Things that most mayors concern themselves with: crime, business growth, roads, keeping taxpayers safe is just not her cup of herbal tea.

So it ends up that accidents like this happen because people who should be doing their jobs are bureaucrats following some insane protocol that lacks the most basic of common sense. 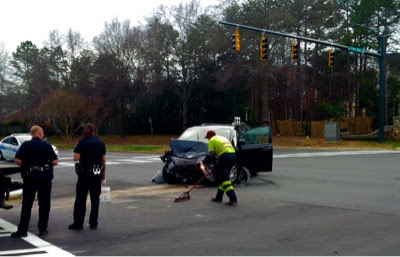 The Back Story - After years of pleading, countless serious accidents, several with life threatening injuries and one fatality; Charlotte DOT and NCDOT finally agreed to a traffic signal at Rea Road and Piper Glen Drive.

The signal installation, nearly 75k of which was paid for by the Piper Glen HOA, took more than a year to complete. Although the lights have been up since before Christmas, Charlotte DOT had delay after delay including Duke Energy dragging their feet taking weeks just to install the missing power meter. 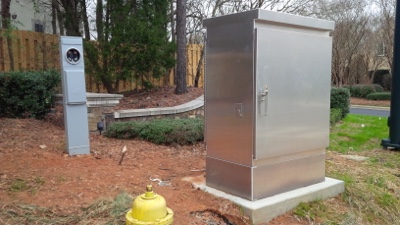 Finally last Week, Duke Energy flipped the power on and the lights began to operate in "disabled" flashing mode.

Let's face it Charlotte Drivers are idiots. Few understand how to negotiate an intersection with flashing signal lights.

Flashing Red means Stop as if it were a stop sign. Flashing Yellow means proceed with Caution. This basic concept is lost on most drivers. Some see the flashing red as optional, others see the flashing yellow as reason to lock up the brakes thinking the light is about to change. Add the flashing red turn arrow and this is the result. 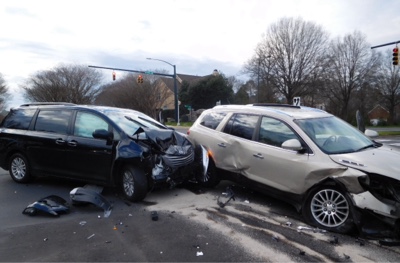 The woman in the tan Mini Van most likely thought the flashing Red Arrow she saw was an indication that the intersection was about to go Red and that the on coming traffic was stopping. She pulled out in front of the black Toyota Mini Van that was crossing Piper Glen Drive at the 40 mile an hour speed limit.

Thankfully the woman who apparently caused the accident had only minor injuries, The driver of the black Toyota was uninjured, but the 3 young girls she was car pooling home from school were visible shaken. Two of the girls ages 11 and 10 were bruised and a good case of seat belt rash. The older of the three in front passenger seat was inconsolable. Air bags in both vehicles deployed.

CMPD responding officers did not cite either driver.

But even once the traffic sign is operation this Charlotte street will remain deadly. Part of the reason why this commuter corridor is dangerous is the proximity to I-485, where most drivers exit interstate but fail to take note or obey the 40 mph speed limit. Speeds of 50 and 60 are the norm. The speed limit needs to be lowered to 35 and enforced aggressively.
Cedar Update: The whole thing grinds my gears. I guess is was the older of the three girls her tears were heart breaking. From the passenger seat she got the worst of it. An hour after the accident the tears were still flowing and it all could have been avoided. So absolutely unnecessary.
I contacted Kim Rhyan and Bill Greèntaner with Charlotte DOT they both offered apologies but little hope of regular signal operation until Thursday. Both blamed the state DOT.

Mayor Jim doesn't give a darn about issues like this unless the HRC is giving out funds, or if you live in a wealthy neighborhood such as Piper Glen. Everything single thing she does has a political motive, and if you do not fit the narrative, then you're on your own.
Remember it's all about gay people and equality, blah, blah, blah..and submitting silly songs about the city, and blaming white people for other's lack of mobility.

Maybe if you could just add some "affordable housing" in the Piper Glen area Mayor Jen would be running all over the place down there!

Cedar I realize that this is your neighborhood but damn you are obsessing over this light a little too much.

But just knowing that these 3 little girls could have been spared what could have been a fatal accident had Charlotte DOT, NCDOT and Duke Energy just gotten off their lazy bureaucratic butts. Really burns me up. It really is the perfect example of Charlotte stupid. Forget Trump and Washington the nightmare is right here in my backyard.

Don't you think it is funny how the entire city, state even the nation got worked up over a stupid bathroom law that might have benefited no more than 2 dozen people maybe once or twice in their entire lives. Yet something as common as a stop light, that would keep 1000's of people safe everyday for the rest of their lives is considered "obsessing".

Cedar I don't agree with a lot of what you post but Charlotte DOT full of idiots, its not just Rea Road, it is all over the city.

Came down Rea Road this AM around 10 3 car pile up at that flashing light looked like someone stopped for the flashing yellow and the 2 cars following didn't.

Keep up "obsessing" about danger, waste, idiocy, crime, incompetence, and obstruction in this town. Unfortunately, it's an endless topic.

Just because this intersection is near you doesn't mean you shouldn't talk about it. People with personal knowledge SHOULD talk MORE than people who are talking out of their butts about things they don't know or understand.

Those people could all have been killed. They were traumatized. Their lives and bank accounts are changed forever. Fortunately, they lived and we hope they'll be able to move on quickly. It's no excuse for the dangerous situation established which caused it to happen.