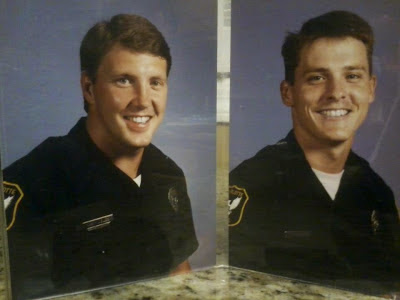 On October 5, 1993, EOW - Officers Andy Nobles and John Burnette were responding to a call about a suspicious vehicle in Boulevard Homes. After the officers confirmed that the vehicle had been reported stolen and that the driver was a wanted person, the driver ran into a nearby wooded area.

The officers caught up with the suspect, and a struggle ensued. During the fight, the suspect was able to grab one of the officers' service weapon and shoot both of them.

The suspect Alden Harden was later apprehended after an intense manhunt.

Officer Nobles was 26 Officer Burnette was 25.

In the 24 years since, Charlotte has erected a memorial Uptown to honor all officers who died in the line of duty. Burnette's and Nobles' names are there.

That's not the only place.
City officials tore down Boulevard Homes and built the Renaissance Development.
Two roads in that development are now named after the officers.

Related http://www.charlottemagazine.com/Charlotte-Magazine/June-2008/Crime-Time/
Alden Harden was convicted in the murder of Officers Burnette and Nobles and sentenced to death in 1994. Harden now 56 remains on death row in North Carolina's Central Prison located in Raleigh. It is doubtful he will ever be executed, as North Carolina suspended the death penalty in 2006.
Posted by Cedar Posts at 6:34 PM

I makes me vomit that this killer lives his life lauhing at the families of those he killed.....what a miscarriage of justice.