The following from the Gaston Gazette:
Who was Officer Tyler Herndon?
He was a young, selfless hero who routinely stood up for what was right, according to Mount Holly Police Chief Don Roper, who hired Herndon straight out of college less than two years ago. Mount Holly Police Chief Don Roper pauses while speaking to the media during a brief press conference inside the Mount Holly Municipal Complex Friday afternoon following the shooting death of Mount Holly Police Officer Tyler Herndon.
“He had the personality. He had the bearing. He had the attitude and the work ethic that I recognize as the traits that would be right for Mount Holly and our community,” Roper told reporters Friday, recounting how Herndon stood out when hiring him.

Roper believes Herndon was only beginning to flourish in his career at Mount Holly Police Department when he was shot and killed in the line of duty early Friday morning – two days shy of Herndon’s 26th birthday.

“He was contributing each day he was here. He was on the trajectory that proved that he was a great decision for Mount Holly to bring him on board,” Roper said. “We’re going to continue the work that he did and take comfort in that.” 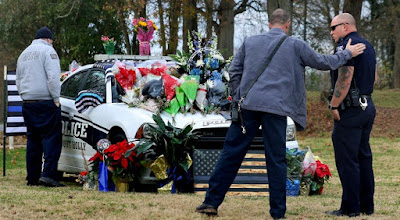 People pay their respects as they gather around the patrol car of Mount Holly Police Officer Tyler Herndon as it sits covered in flowers outside the Mount Holly Police Department Saturday morning, Dec. 12, 2020.
In Roper’s three decades working in law enforcement, Herndon’s tragic death was the most unfortunate experience to date.

Though his life was tragically cut short, Herndon’s impression on those he interacted with will last a lifetime.

Jessica Knight, a former clerk at Circle K on the corner of Woodlawn Street and Belmont-Mount Holly Road, encountered Herndon several times at the store. Though her interactions with Herndon were brief, she knew he was a man with good qualities.

“He was so positive. Never had a bad day in the eye of the public. Always smiled when he walked through the door,” she said.

On a summer day in 2019, Knight noticed Herndon appearing to pay for a man’s gas at the store. Knight took a photo of the moment and shared it to the Mount Holly Town Talk Facebook group, where the photo gained attention from the public.

In an interview with Fox 46, Herndon said the man was afraid he didn’t have enough gas to travel to his new job. Without hesitation, Herndon paid for the man’s gas out of his own pocket.

“It’s amazing. He gave people hope [that] there are still good people in the world. He had a good mindset,” Knight said. 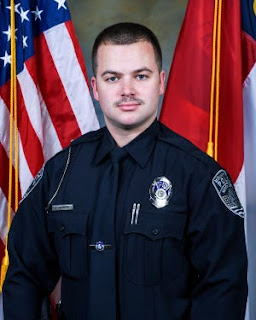 Officer Tyler Herndon
Like most young police officers who are new to the job, Herndon was quiet and a little nervous, according to Sgt. Mark Walls of Mount Holly Police.

It wasn’t long before Herndon broke out of his shell.

“It wasn’t long before we had him clowning around and cutting up with the rest of us,” Walls wrote in a Facebook post. “Tyler was a smart, warm-hearted person who had a passion to help others.

“He was a genuinely good-hearted person and once he got to know you, he was a lot of fun to be around.” 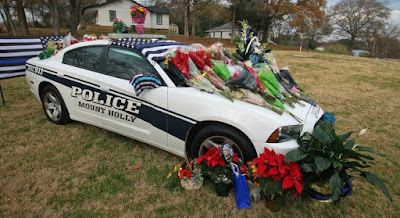 What began with police officers responding to a breaking and entering at a business on Beatty Drive early Friday erupted into deadly gun fire.

Police didn’t say to what extent each person was involved in the shooting.

Herndon was transported to CaroMont Regional Medical Center with serious injuries. He died there later Friday morning.
A procession of police cruisers from Gaston County police departments, as well as many from Charlotte-Mecklenburg Police Department, escorted Herndon’s body to the medical examiner’s office in Charlotte around 10:30 a.m.

The suspect age 24, who was also injured in the shooting but left the hospital within a few hours, was booked into Gaston County Jail at 8:45 a.m. without bond and charged with first-degree murder.

Soon after, he was transported to Cleveland County Jail, where he will will be held until his first appearance in court, which Gaston County District Attorney Locke Bell expects will be Monday.

Early Friday afternoon, the procession left Charlotte and escorted Herndon’s body back through Gaston County along Interstate 85 to Harris Funeral Home in Kings Mountain. Herndon was reportedly raised in Kings Mountain and graduated from Kings Mountain High School in 2013. 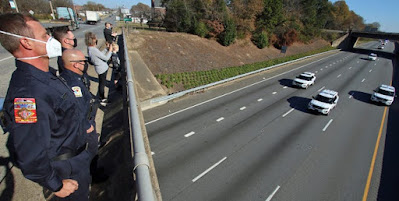 Gastonia firefighters, police and others gathered to pay their respects as the procession for Officer Tyler Herndon made its way southbound on I85 near the East Ozark Avenue overpass Friday afternoon, Dec. 11, 2020.
As the N.C. State Bureau of Investigation continues investigating the Friday morning shootout, many details are still unknown or unclear. Roper noted that those details aren’t being released so investigators can properly dissect what led up to the shooting and why shots were fired.

Mount Holly Mayor Bryan Hough asked community members to illuminate a blue light on their porch in support of Mount Holly Police, and donate gift cards to Mount Holly officers via the drop box outside the police department. 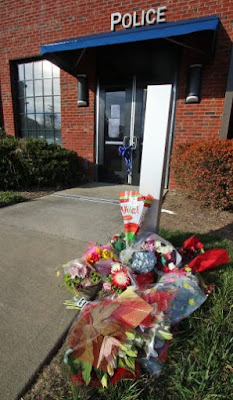 Cedar Note:
The suspects name has been deliberately removed. Human waste deserves no mention.
Posted by Cedar Posts at 10:36 AM

It's a shame the Suspect didn't get shot all to hell!

Where are the protests over this shooting death?

Why was the suspect moved to Cleveland County after being charged? Seems like a waste of gas to me, unless he was being dragged behind the transport van.
Yeah, shockingly no protests. Those are reserved for ice cream stores who dish up snark.

The dope head lowlife scum (I fully support Cedar's point of not speaking his name) was moved to Cleveland County Jail out of caution for his safety. He looks like he's accident prone. Wise move.

Who cares about his safety? He made the choice to be a POS!

Again, why are there no protests over this shooting death?

One rookie and two others just quit today, realization is real.

There needs to be protests!