CMPD gave an update on Tuesday’s deadly shooting involving a U.S. Marshal officials and a suspect who was being served warrants. 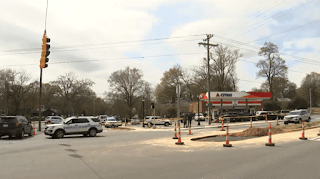 CMPD said it worked into the night and said it is very early in this investigation and continues to interview witnesses and collect video. It is unclear at this time if video from the gas station where the shooting occurred has been reviewed by CMPD.

On Tuesday around 11 a.m. U.S. Marshals attempted to serve multiple warrants on a 32 year-old Frankie Jennings at a gas station in the Plaza Midwood area. One U.S. Marshal deputy perceived a threat and shot and killed Jennings.
Jennings was celebrating his 32nd birthday on Wednesday.

CMPD later announced they’d be handling an investigation into the shooting.

During Wednesday’s news conference, CMPD was asked if they could conduct an independent investigation without interference from the U.S. Marshals office, and they said yes.

CMPD said they are not prepared to talk yet about the details of the investigation including where the gun was recovered.
According to several sources the shooting happened shortly after 11 a.m. in the 2200 block of The Plaza, at a Citgo station. The dead man was identified as Frankie Jennings, who was killed on his 32nd birthday. 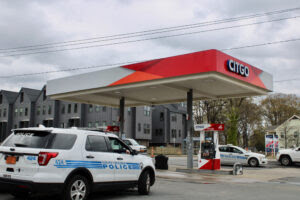 According to CMPD’s account of the shooting, one of the deputies who was attempting to serve the warrants “perceived a lethal threat and fired a service weapon, striking the man.”
Jennings died at the scene.
According to CMPD, a firearm owned by Jennings was recovered.
The police department did not disclose the nature of the outstanding warrants or whether Jennings was holding a gun.

The name of the deputy involved has not yet been released.
Jennings had eight outstanding Mecklenburg County warrants, with additional warrants from Rock Hill and Carolina Beach.

The local paper in Charlotte reported that Jennings faced several warrants relating to an incident that happened in Carolina Beach, south of Wilmington, on March 4. The warrant alleged that Jennings committed three felonies stemming from a 4:30 a.m. confrontation that involved police responding to a dispute that apparently involved also a girlfriend.
The charges included assault with a deadly weapon against a government official, fleeing to elude arrest with a motor vehicle, and reckless driving to endanger.
The Charlotte paper also cited federal Clerk of Court Frank Johns of Charlotte as its source relating to the warrant.
Cedar's Take:
Mr. Jennings had dozens of previous arrests and convictions for a dozen crimes since a teenager but most were not violent offenses such as B&E and drug charges.
A conviction for Habitual Felon sent Mr. Jennings to prison in 2014. He was paroled and later released from parole in 2016.
I seemed as if Mr. Jennings had his life under control. At least Mecklenburg County shows no arrests during the 2016-2019 period. Nothing recent.
Apparently that began to change in 2020 as the warrants piled up the Feds began to take notice. Crossing state lines to commit felonies will often get the attention of the U.S. Marshals as it did in this case.
Fleeing from Police, (reports are that a vehicle pursuit was called off when New Hanover deputies were chasing Mr. Jennings at speeds in excess of 90 mph) and felon with a weapon charges called for "jump out  and grab" arrest tactic.
Which led to a very unfortunate outcome.
Posted by Cedar Posts at 12:56 PM

Cedar WTF you're getting soft this MoFo got everything he had coming to him. Period.

Anybody else watch the town hall with Chief Jennings? Pants with a stripe? What a bafoon.

^^ that will clearly boost morale...duh.

Was Tufano moderating? If so, how many times did he say “boots on the ground”?

Just because your a habitual felon doesn’t mean you deserve a death sentence. If that’s case they should killed Dylann Roof and Robert Long those white NUTS on the spot. I will say if he reached for his gun then he definitely faced the consequence of that move !

Dylan Roof was not a habitual felon. He deff deserves to die, not even a question there.

But habitual felons have no place in society as they bring nothing to it. Good riddance.

So what uniform changes are they going to make?
Did anyone ask the chief if this new task force will do anything? Never seen a single one on any callback or homicide. What a joke.

How was the meeting? What was said? What new changes are going to impact us? How does the new uniform look like?

I would like to congratulate all the children for not rioting (yet). I had to drive through that intersection yesterday, seemed pretty quiet and status quo. With the lack of facts out there, I would expect tantrums and a daily vigil screaming about police reform, and saying his name. I am thankful that nonsense is not happening, but I wonder what the difference is on this one? Where’s the “support”? Maybe it’s coming?

Frankie needed killing. Habitual Felon that means he didn't learn his lesson, wouldn't change or couldn't change. It was in his DNA to be a thief and a violent felon.

And remember these are are only the crimes he was caught doing, no telling who he's killed or raped in the past, Frankie had no boundaries and he only cared about himself and his own satisfaction.

Like George Floyd the liberals will make Frankie a martyr and glorify his life because the African American community has zero morals they have evolved to become nothing but violent thugs and hood rats.

Dumbass nugget exited the car struggled with the Deputy managed to get lose and grabbed his gun off the seat. BOOM Goes the Dynamite! Game F-ing Over!

Jennings was very clear in the meeting. Every decision made is in the best interest of the department and employees. His wording was interesting to say the least. Placing the departments interest before the employee. Anyone who thinks the white shirts are looking out for the rank and file officer is delusional.

Is Frankie Jennings related to Johnny Jennings? Two real idiots if you ask me. Thanks for ruining this department “Chief”.

You got to ask yourself why is it that every time cops kill a black man it is a freaking tragedy as far as the MoFos are concerned? Yet no one says a word when a white guy is taken out by the cops. No memorials no protests no matter how avoidable or innocent the white guy might be there is no crying mommas no yelling his name. None of that stupidness. But black people think otherwise if it is one of theirs. What the freak is that about??

I love how someone asked if the chiefs were going to wear this new uniform that they are going to mandate. Jennings replies that of course they are, and try to make the officer sound ignorant. All the while they are sitting there in a completely different uniform. They haven't worn the 5.11 uniform or the new vests. They wear those white shirts with the "modified" gun belts. If they wore all of the shit a normal patrolman wore they would change their tune.

Nigs always doing dumb shit, this fool knew they were coming for him he's pumping gas and they jump out dumb MoFo goes for his weapon on the passenger seat what a classic thug move.

His sister complaining about his blood still on the pavement is such a laugh.

Word is that CMPD VCAT was told to stand down and let the feds handle all violent felon take downs in order to avoid a Breonna Taylor situation. JJ is afraid of another 2020 Summer of endless idiot riots.

How is the new uniform? What changes were talked about?

JJ is destroying our department and making us look equivalent to boy scouts.

Have you paid attention to this story? Silence from the Feds absolute silence. Them boys got their shit together not back stabbing chief throwing officers under the bus. Tells me I'm putting in time at the wrong place.

Shit happens, and yes they do