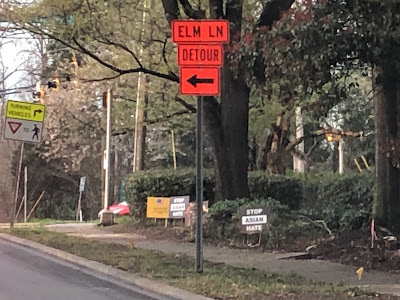 Those of us who have lived in South Charlotte all our lives have had enough of this self-righteous wokeness.

The signs now litter Highway 51 know by transplants as Pineville - Matthews Road. Even though the signs are in violation of the city's sign ordinance they remain in place. 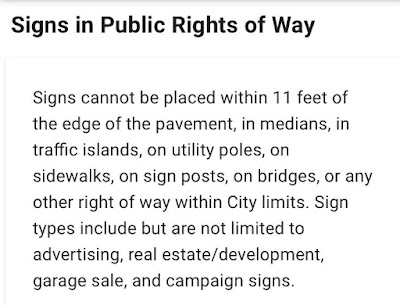 The liberal idiots who littered the streets with this garbage, claim they have an approved permit for the "Stop Asian Hate" signs. If the city gave these clowns an exemption they are complicit in this madness.

These signs are just another manifestation of Charlotte's decline into a shit hole city.

In the last year we've been forced to stay home, keep our kids out of school and wear a mask everywhere we go. We've endured riots and endless protests, watched as panhandlers invaded our streets and homeless camps blanketed our once proud Uptown.

We've watched not only our businesses close and not re-open, but our streets re-named, our schools and libraries re-named as well, all for the cause of diversity, community and inclusion.

Yet inclusion within our community is now further away than ever.

Mecklenburg DA has refused to prosecute drug crimes, magistrates refuse to require bond for even the most violent offenders, so now our streets are a cesspool of drugs and violence with more than 80 shootings since January 1st.

Johnnie Jennings the Chief of CMPD has told officers to stand down and leave protestors alone, and to stop being pro-active.

Traffic enforcement is non-existent. CMPD Officers routinely spend their entire shift in their favorite "hidey hole" answering only the most serious calls for service.

Drug houses have flourished. Medic calls to Over Doses have jumped 70%

And the Mayor is MIA.

The streets are covered with garbage everywhere. Intersections if picked up would each fill a dozen 55 gallon bags.

Street lights are out everywhere making it impossible at night to avoid rim busting potholes that are everywhere.

Even 485 lane markings are non-existent.

Basic city services take days to respond to a request if they respond at all.

What once was Charlotte's most perfect four lane Rea Road has fallen on hard times. The additional blight of "Stop Asian Hate" signs along with "Free COVID Testing", " All Schools Matter" and "Abortion Info Hotline" signs certainly increase property values.

Chinese always hating on Black folk. Same with most 7-Eleven owners the Indians and Muslims they hate black people they think we are all the same. If I'm not in uniform they are nervous as fuck. In Eastway they won't report shoplifting even a full blown shake down won't give their name don't want a police report filed. Had one where a customer called it it the clerk some Asian of some type all upset "I no call you" You go you go now" they won't report a robbery attempt only if they get robbed do they call and that's because their boss will take it out of their pay. They are all crazy as fuck!

1252, Imma sure that the supervisors luv 2 read sum of your reports. Super racist black cop.

Didn't the Rev Ungodly Al Tax-cheat once rally the NYC blacks against the Korean shop owners, while The Rev Jessie was heckling the Hymie town apartment owners?
Ask the Koreans in LA who they fear more, the blacks or the whites. I think the answer will surprise most...not.

Watch the video. Very sick. This shows how much libs and CNN don't actually care about immigrants or anyone else unless it fits their twisted narrative.

Cedar I have it from an inside source that not only did City of Charlotte staff approve the Stop Asian Hate signs for placement in the street right of way the City printed the signs. Your tax money as with the BLM street painting paid for this bull shit!

The endless liberal agenda is amazing. Bathrooms for chicks with dicks, re-name streets and high schools after blacks instead of whites, complain about your ghetto being cleaned up because white people are investing the money. But the best is the idea that if we don't arrest people we won't have any crime. Vi Lyles you are an idiot. Chief JJ you are beyond incompetent.

I give zero fucks about Asians one way or the other. My life experience with them has been basically a net zero leaning on the side of they are more fucked up than coons but less violent. Pushy and assume everyone else is stupid and strangely self-absorbed. Never recall any who have made a meaningful contribution to Charlotte that's for sure.

I'm just fine we don't have a "china town" in Charlotte since most of the city is already coon town, with the exception of little Mexico on South Blvd and over on Central.

No hate just wish they would stay away from me and these bullshit signs make me like them even less.

How is this even a concern in Charlotte?