Friday night a local Charlotte television station aired a 1/2 baked story about a West Blvd mini strip mall that has been an open air drug market for years.
According to the sparse on facts story, in rare cases the US District Attorney's Office can move to seize property if they can prove it is a danger to the public.
"The crime and violence at a small west Charlotte strip mall are a danger to anyone in the area, federal prosecutors said."
According to the television station: "Buses and children inside vehicles have been shot at the intersection of West Boulevard and Remount Road."
In the federal filing prosecutors laid out their case: “Few properties in the Charlotte area have had a greater history or volume of drug-related crime and violence than the West Boulevard property,” according to a federal filing. “And we have seen it for ourselves.” 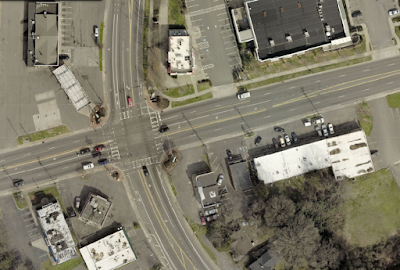 West Blvd and Remount Road
The property that is apparently under threat of seizure is 1533 West Blvd aka County Tax Parcels 11903341 and 11903340 owned by West Blvd Shop Inc, which according to the North Carolina Sectary of States office is operated by Abdoulkader L. Bouche.
Bouche is a ghost and the company West Blvd Shop Inc. owes Mecklenburg County four years of property taxes totalling more than $21,000.00, but surprisingly the company is listed as active with the North Carolina Sectary of State's office despite being habitually late with annual filings and being administratively dissolved several times over the past ten years.
Bouche has neither an address in Charlotte or elsewhere that CP could find.
Yet 1533 West Blvd isn't the only "Open Air Drug Market" locations on Beatties Ford and The Plaza are also targets for the Feds.
After the 2019 double homicide on Lytham Drive in South Charlotte the Feda seized the home and it has since been auctioned off to new owners who have promised to clean up the mess.
CMPD's  Crime Reduction Unit has been focused on the shopping center for the past three years.
Business owners said that they were frustrated too. “Simply put, the property serves as an open-air drug market,” one shop owner is quoted as saying according to the federal complaint.
There have been 14 shootings at the shopping center in the last four years. Innocent bystanders’ cars, including those with children, have been shot into and even a city bus has been hit,” the complaint states. 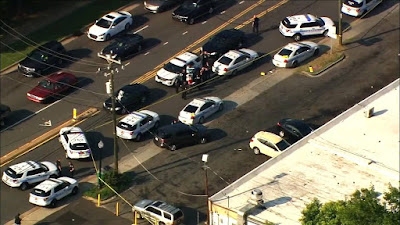 Cedar's Take: Foreign nationals and immigrants both Asian and Middle Eastern own a ton of Charlotte's real estate, particularly property in less desirable areas.
Unfortunately, they are often absentee owners or shell companies who are buying property in cash derived from sources, often illegal, from outside the United States.
They seldom have a grasp of basic business practices and often are buying property with pre-existing issues at inflated values, but because it is cash the money flow is hard to track.
Those who buy property are often doing so without a survey, environmental review or any regard for zoning or permitting.
According to a Meck County source nearly 23% of all 2020 taxes are still due and much of that is attributable to Asian and Middle Eastern owners. 100s of these owners owe multiple years of property taxes.
Added to their nearly cash only sales they are the perfect conduit for drug money and funding of terrorist organizations world wide.
Apparently G's Food Mart fits the profile as well. Hat Tip to the CP follower who sent this photo ("you have the right to remain silent, as if they ever do") of a couple of guys doing nuttin. 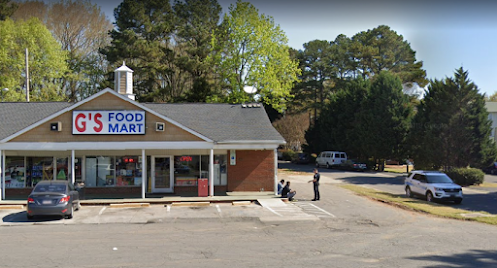 In fairness this looks like community policing.
Posted by Cedar Posts at 7:17 AM

Next target should be G's Food Mart at 1339 Sharon Rd West. Open air drug market, particularly rocking on Fridays at 3 pm. Just set an empty cop car or van in the alley and watch the rats scurry. Only a matter of time before this spot explodes Sadly it's 50 ft from apartments that are occupied by many hispanic kids who have to be subjected to this activity.

8:08 I'm thinking that's on the edge of Steele Creek. They are way to understaffed to deal with it. But its a thug nest. The light rail makes it easy and the north Charlotte dirt knows CATS doesn't enforce fares everyone rides for free. What a freaking CF!

8:55 South at Sharon West, behind the 7-11. 400 yds from light rail, 1.5 miles from Quail Hollow Country Club gates. Someone is always on duty, sitting in front minding the shop.
I did contact the county commissioner's whose district it's in, and she could care less. Nature will take it's course, as it always does.

Sharon Road West, where yesterday's horrible zoning density decisions plague the city today. Welcome to Charlotte 2040 if you want to see what your future holds for you.

Been that way for a while. There's a foot path back towards the Sharon Lakes projects behind the place running northeast. Makes for a really easy escape route. Need to put a couple of units back there to catch the runners.

Cedar I just sent you a photo, of G's hope you don't mind?

2:32 Give it time soon all of Charlotte will be a like WT Harris and Sharon Road with only pockets of gated communities for the white people.

Who’s ready for some high class customer service training?! I can’t wait to give all our customers a magical experience!

Its gonna be awesome! The only question missing will be "Would you like to Supersize that"?

Awesome photo of G's Food Mart Cedar! That's spot on. The rest of the thugs and hood rats scurried out of there. Notice the direction of the CMPD Explorer? Whoever that is blindsided them. Just a couple of questions. LoL

What’s next JJ, are we gonna give survey cards to civilians we interact with so they can give us 1-5 stars like an Uber rating?

You see where I’m going with this. Your leadership sucks ass bro!

That photo of G's is years ago. Now gang graffiti is all over the store (GOD, not sure what it stands for), and the lot is crawling at nights. Last week looked like a rap concert for the homeless.

Remember the first rule of customer service: The customer is always right.

They shouldn't do that. It's restraint of trade!

Y’all hear about that racist stuff Captain Garnes said in Eastway’s roll call? He has since been moved but it’s being kept quiet.

What the heck did Garnes say?

Lots of rumors about what he said in roll call, let’s get some accurate info on what he’s said. And, like most command staff, when you fuck up the rules are different than boots on the ground. There won’t be an IA board, he won’t get demoted, he will simply be moved to a very low stress, 9-5 with no call back position. Actually sounds like he wi be rewarded for saying whatever racist comments he made. Now, just imagine for one second if a patrol officer made defamatory comments.....lol....the morons in IA would fuck that ass so hard even DeWalt, er I mean DeGorge would need to grease that rusty pole up.

But hey, at least we will have sharp looking pants with a stripe on them.

Hey Y'all know when a Black member of command says something its not racist. It's not racist it is fact!

What about comments about small penises? How much Vicki cost the city on that one?

If you can literally fuck at the CVOC or on the desk of the University City captain while being paid then making racist remarks is nothing to get riled up about. If you can get caught fucking and moaning on the radio in Freedom division or cost the city 100000 and still get rehired into secondary employment then you can sleep on any hate speech.

You need to learn your history around this place and go take a damn report.

Someone post what Garnes said! It needs to be made public.

Garnes said Dance got a small pecker.... oh wait, that was Vicki
Nevermind. Black Privilege does have its privileges I guess

Garnes has always been a militant racist. The only thing missing from his uniform is a black beret. So anything he says would not be a big surprise. But as others have already said, he will just be shuffled to a new office. Absolutely nothing was done after Stella's comments so the precedence has been set. But if you are a cracka you had best keep your mouth shut because THAT precedence has also been established. So just get into your Hidey Holes and take the scenic route to your CFS if you want to survive....

If it ain't on a video it never happened.

Don't know the man, only in passing and maybe talked to him a couple of times when he was over at Providence. Can't imagine he'd be that out of line. Someone needs to lay out the facts.

Here’s a fun fact for you ^. If your command staff and black you can pretty much do whatever
Vicki... Cecil... Stella. Oh. Let’s not forget about RoMo’s lack of college education

^^What if you’re white and not command staff?

Speaking of college education, ask Garnes if you can study and do homework for your college classes on duty while you dodge calls and are riding numbers.

I heard that Garnes was recorded on BWC talking his shit!