A standoff between law enforcement and an individual at 553 Hardaman Circle in Boone, North Carolina ended shortly before 11pm on April 28.

On April 28 at 9:44am, Watauga County Sheriff’s Office responded to a call for a welfare check at the home when the homeowner’s employer called to report the homeowner did not report to work or respond to telephone calls.

Deputies entered the residence after discovering all vehicles belonging to the residents were on the property. Upon entering the home, two Watauga County Sheriff’s deputies received gunshot wounds from an unknown individual within the residence.

During an initial rescue attempt of the WCSO officers, a Boone Police officer was hit by gunfire, but was uninjured due to his protective equipment.

“This is an incredibly tragic situation and our thoughts and prayers are with everyone involved as well as their families and our community,” said Watauga County Sheriff Len Hagaman in a statement on Aug. 28. “I greatly appreciate the tremendous support we are receiving from law enforcement agencies across the region and the state.”

The investigation is ongoing, and is being led by the North Carolina State Bureau of Investigation. 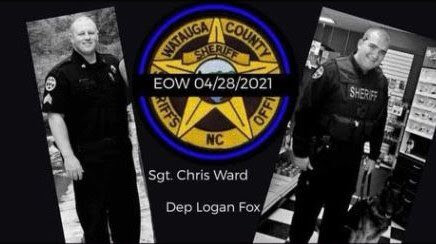 Again I make an appeal to main stream media to never mention the shooter by name.
The notoriety that a violent act provides a shooter is often their only twisted justification - without this incentive, maybe the next shooter will know there is no blaze of glory. Only Anonymous Shame.
Posted by Cedar Posts at 9:32 AM

Just so sad. To their families, no words can help but their sacrifice will not go unnoticed.

Vanilla Isis strikes again !!! On another that outspoken fool Joshua C Richardson has deleted his Twitter account he use to preach a handful of nonsense from day to day!

Who in the crap are these officers on the department FB page that are advertising for recruitment? Looks like a bunch of rookies and low level non experienced officers

They are the little brainwashed children who know nothing of police work! Much like the rookies who keep getting promoted.

one of them is Amanda Cater. The jokes write themselves with that one.

I was embarassed when he showed up on 2nd shift wearing his shorts and flip-flops with his belly hanging out from under his t-shirt.

I wasn't. I was laughing my ass off and I'm not even on 2nd shift.

Oh BIG FAT Jean Moran, just because Sgt McGarity caught you sitting at you apartment out of service several times in another division while the rest of us were humping calls for service, don't be mad. You deserve to be written up by him. All of us on 2nd applaud him finally doing something about your lazy fat ass. That has been going on for years.

I wouldn't talk about anyone else and a fat gut, you come to roll call about every other day with your big fat gut hanging over your duty belt and shirt tail hanging out. And your uniform is dirty from your food stains. Do you ever change your uniform??? Also quit coming to all of us asking why no one likes you and you cant find a boyfriend. You are fat and ugly and no one can stand you!!! Signed 2nd shift

Moran is a bully and liar who abuses people and doesn't do her job. Same with Mara Morrow. What's not to like?
You really don't need to focus on appearance. Actions and intentions are the problem.

Some people don't like Moran, but to the comment from 6:02 p.m., this is unacceptable. How do you call yourself a police officer and write such awful things about someone? Seems like you forgot or never knew the Golden Rule. And to those who she came up to with her problems, why did you not listen and try to help her instead of tear her down been going to the sergeant. Maybe if you saw a specific safety issue, but you should listen and help someone, especially a sister or brother in blue. 6:02 p.m. needs to check him or herself before they judge and point fingers in such a derogative way. I understand this site is an outlet for officers but some of the comments on here getting too disgusting and I think I'm going to avoid coming here just like other media these days which only brings everyone down.

Anonymous said...
Moran is a bully and liar who abuses people and doesn't do her job. Same with Mara Morrow. What's not to like?
You really don't need to focus on appearance. Actions and intentions are the problem.

True. No other reason to say it.