Welcome to the new normal in Charlotte. 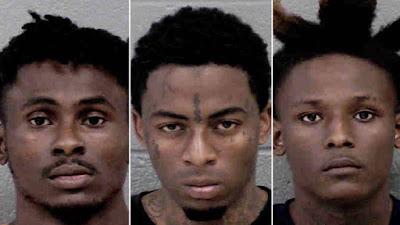 From left: Shiodon Shipp, Jarvis Short, Alvin Steele
Three people have been arrested after a 7-year-old girl was hurt in a shooting Tuesday night in northwest Charlotte, according to Charlotte-Mecklenburg Police Chief Johnny Jennings.
Officers say the crime is connected to a separate shooting that injured two teens earlier in the day, but no arrests have been made in that case.
The first shooting took place on Hovis Road in the afternoon, and then the second on Marble Street later that evening, less than a mile away.
During the Hovis Road shooting two juveniles were hurt in a drive-by shooting outside the Hope Mart which occurred shooting, around 3:30 p.m., detectives said someone in a car targeted two teens during a drive-by outside the Hope Mart.
The kids ran to a nearby house to get help. The victims are 14 years old and 15 years old, according to Jennings. The teens were taken to a hospital where they are in stable condition.
A few hours later, investigators said a 7-year-old girl playing outside was hit by a bullet when two groups started shooting at each other on Marble Street.
The girl is in the hospital with her parents and doing OK, authorities said. The police said three people were arrested in connection with the girl’s shooting.
Alvin Steele, 19, is accused of shooting the girl. Steele was charged with assault with a deadly weapon inflicting serious injury and conspiracy to commit assault with a deadly weapon inflicting serious injury and other charges.
Shiodon Shipp, 23, was charged with possession of a firearm by a convicted felon, assault with a deadly weapon inflicting serious injury, conspiracy to commit assault with a deadly weapon inflicting serious injury and other charges.
Jarvis Short Jr., 28, was inside the vehicle with Steele at the time of his arrest. He was arrested for possession of drug paraphernalia.
Charlotte Mayor Vi Lyles continues to push for bail reform where those arrested are given "no bail get out of jail free" cards based on their skin color.
Mecklenburg County DA Spencer Merriweather refuses to prosecute anything but major crimes and liberal judges are unwilling to incarcerate young offenders in some misguided believe they are really good boys that are just going through a phase
Steele has been arrested more than a dozen times, six times since turning 18:

Most recently on March 18th on weapons charges, yet zero convictions and zero bail, police do their job and the DA, Magistrates, Judges and Courts turn these violent thugs back loose on the streets.
Short has been arrested for assault on a female and communicating threats.
Shipp was convicted of shooting into an occupied building but given a suspended sentence in 2019. He was arrested again last year in December for a shooting in which two people were critically injured and was released on an unsecured bond despite facing a dozen felony weapons charges.

Yeah but he's a good boy and loves his momma and his daddy whichever one that is.

First I want to apologize to the good people of Charlotte who just happen to be Black.

All 3 of these MoFos will be back on the street in 24 hours. The only way to fix the problem is let them kill each other. Which at this point seems like the plan Vi Lyles has in mind.

The population of Charlotte is 35% African American yet they account for 90% of the murderers in 2020.

The answer is to just remove the people of color and we would have a pretty crime free city.

So why does the media start crying that traffic stops disproportionally target African Americans?

They are clearly the ones committing these violent crimes.

The should be targeted and those that are not criminals should welcome the targeting.

They need to be given the opportunity to shoot at someone who can shoot back!

...and if you say it over and over and over, enough times, people will start to believe it. Thus you have the formula for the BLM movement.

Get over it! Charlotte is run by Black Liberals and they are soft on crime. PERIOD! It is only going to get worse.

And the only way to turn the tide is to start locking them up with long prison terms and no second chances.

The guy who shot the mom of 6 near lumberton in a road rage incident was also a YBM. Just saying.

We don’t have to be so upset about the facts. We just need to work to change them.

BLM What a total joke. They've made George Floyd into a Saint. The question is how long before they realize George Floyd was a thug? Will it take them 100 years before they start tearing down the memorials and re-name all the streets they dedicated in his name?

And its the same thing with Mario Monroy he was out on an unsecured bond awaiting trial on an armed robbery charge they turned him loose due to COVID.

3:34 you can say Young Black Male but he the Lumberton shooter was nothing but a thug. He wasn't young nor a male. And he should be put down like the rabid dog he is.

I'm 10 years in and I have never once fired my weapon but that time is coming and I promise you I will finish the job if need be.

Nice detective work Cedar! These fools should of never been released in the first place. Mayor Vi could careless she on the Biden ticket for her next senate election

Face Tats what a freaking dumbass. He should be locked up just for being stupid. No way he'll ever get a real job except as a clown maybe a welder?

I'm all for "re-education camps" as long as they never let these mofos out.

When will these young upstanding men start targeting folks like Mr Merriweather, Mayor Vi and families? They have plenty of money and live very good lives. I'm certain he and his kids have lots of valuables, and the young men will get of of jail free card. Until this street war on law abiding black folks is taken to those who continue to allow this behavior, nothing will change in this city. I weep for the law abiding citizens whom Mr Merriweather cares very little about, including the 7, 12 and 14 yr old black children and their parents whom he feels their lives mean nothing.
And where is Braxton's voice in this war on children in Charlotte? Leaders lead, and obviously he doesn't care about the youth in this town unless he can take his shirt off for photo ops.

Look at the numbers 90% of the homicides last year where committed by noggiers 90%! In a city where only 30% of the population is BLACK! The number should be around 33% it is not. Noggers are 3 times more likely to commit a murder than anyone else so stop crying about racial profiling and disproportionate traffic stops of people of color!

The noggers commit 90% of the crime in this city and until Black Leaders get behind the call to lock these fuckers up and stop letting them out of jail this shit is just going to get worse.

JUST FUCKING STOP IT! Because at this rate Blacks will be known as violent criminals and nothing more for the next century. The FUCKING Bitch Mayor needs to accept this fact or fucking resign! TODAY!

Sure looks like Ken Gill from CPI Security was spot on with the comments he made to that scammer George whatever his name is...

...speaking of which, what happened to him?

He seems to have gone MIA...makes sense.

Speaking of MIA, what about the pledge fund?