Yes There Really Was A Saint Nicholas

Nicolas was well to do son of a merchant family in Myra, a province in Asia Minor whose legend didn’t begin until after his death. Nicholas became famous for the generosity he exhibited to so many through his life.

The reason he was not celebrated during his lifetime was no matter who he helped, he swore them to secrecy concerning his generosity until after his death. Once he died, story after story began to emerge. 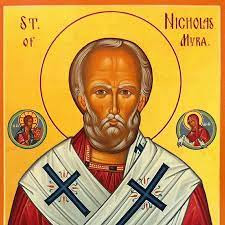 The most famous story of Nicolas has to do with us providing dowries for three daughters of a poor man in his village. The man was so poor that he was thinking of selling one of his daughters into a life of prostitution so that the family could survive the winter.
Nicholas, legend has it, came by on Christmas Eve and threw a bag of gold through the families window, thus providing the dowry for the oldest daughter, and money for the family.
As the next Christmas approached the second daughter was near marrying age a second bag of gold was found Christmas morning in the fireplace as if it were dropped down the chimney.

As his last daughter came of age the girl's father caught Nicholas when the bag of gold sailed through the family's window and wound up in the knee stocking that was hung by the fireplace to dry.

As the legend of Nicholas grew, he was canonized by the Greek orthodox and Roman catholic churches. His body, however was kept in a shrine in Islamic territory. The Romanists later sent a team to "liberate" the body and bring it to Rome where it could be enshrined.
The church hired workers and the tomb was lavishly constructed. It was only after the completion of the work that the church realized, they had hired a group of Muslims to do the ornate finishing work. Knowing of Saint Nicholas and his body's liberation these workers and scribe the ornate designs on the tomb, "there is only one god and Allah is his name and Mohammed was this prophet". This is not discovered until sometime later, much to the chagrin of the church.

In 1988 the body of Saint Nicholas was given back to the Greek Orthodox Church. Upon their request, the body was shipped to upstate New York to a Greek orthodox shrine where it rests today.

Today in Germany and Holland Nichols birthday December 9 is still celebrated by children who find candy in their shoes. While, in the US Christmas has become his holiday.
Sadly Nicholas would be aghast at what he has been getting credit for starting. A gentle humble man humble man who quietly did as the Lord directed him throughout the year and throughout his life, he is now exalted at the end of every Christmas pageant parade; but not for the right reasons.
His simple generosity has been humanized as it was discovered to be good for business.
Through the nostalgia of the legend, and the hoopla, the let’s never forget the real gift we celebrate; the kept promise of our Lord who loves us beyond our ability to comprehend.
No one would’ve have been a bigger advocate for the real gift of Christmas than Nicolas of Myra.
The Lord's word has been kept!
Merry Christmas!
Thanks to Mike Richey who on December 24, 1992 circulated this story within the First Union Securities, Inc. Inter-Office Mail and via Tele-Fax (Google It).
Footnote: The St. Nicholas Greek Orthodox Church located at "Ground Zero" in New York and founded in 1916 and destroyed in the September 11, 2001 attack, has been rebuilt and will officially open in 2022 with several ceremonies during Holy Week in April of 2022.
Posted by Cedar Posts at 1:00 AM

Quit talking to the media about the Goodwin case! Now a retired officer is defending the truck driver on Fox46. No one knows the details of the police investigation and any comments could affect a fair jury.

Great story. Thanks for posting it on Christmas morning. The amazing thing is that someone was allowed to send this kind of religious history to fellow employees and wasn’t cancelled. Back in 1992 companies like First Union evidently believed in free speech and religious freedom. I doubt this would be allowed at its successor Wells Fargo. Sadly,

Merry Christmas all and pray for this great nation. We are in trouble and we all need to pray for God’s mercy nd salvation.

The original St. Nick was giving out pledge fund checks as well as chicken sandwiches.

10 calls holding, get to work Suckers!!

We got a Saint Cecil!

We got an elf name Stukey!

0913, your comment just further solidifies how ignorant you are. If you haven’t figured out by now the shots are useless and potentially dangerous/deadly then there is no hope for you. Just boost yourself every 6 months until you end up like the professional soccer players falling out left and right due heart/health issues and leave everyone else alone so they can move on.

9:13….Mentioning the clot-shot guy is like mentioning beetle juice …. Say it enough times and he’s sure to show up😜😜

Lol….Alex Trebek or Alex Jones. I’m sure the clot shot guy believes everything Jones spouts and is probably a Q-anon nut as well !

It’s really hard to believe how ignorant and uninformed many people are. I guess they are too focused on tits to do some research and be informed for themselves. I don’t give a rat’s ass about whoever Alex Jones is or Qanon. It’s your choice to ignore or not care about the 20k people reported on VARES that died from the shot and many more injured. It’s happening and it’s real and Molly Gratham’s tits aren’t telling you about it. Here’s a link if you must be spoon fed.

Oh, don’t worry there is what I’m sure is a great cardiologist in the know (just like Fauci who has got everything wrong about COVID and the shots) that tells you it’s not from the shots.

Just give it up guys, COVID is over. The flu has finally re-emerged and now with omicron you can’t tell the difference. The federal government has even given up on COVID. Go ahead and stand in line for hours to get tested with the faulty PCR test that fueled this whole mess which is going bye bye in a couple days. Get your booster every 6 months like a good little patient and leave everyone else alone.