This story didn't get much traction on WSOC, maybe it was the way reporter Mark Becker introduced the story:

"Some people are outraged after a memorial to a fallen Charlotte-Mecklenburg Police Department officer was found dumped in a creek near University of North Carolina-Charlotte." 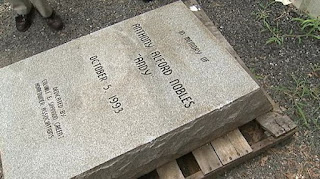 Some people? Really Some? Cedar thinks everyone should be outraged.

Nobles was working along West Boulevard in October 1993 when he was shot and killed along with Officer John Burnette.

The monument was commissioned soon after that by the residents of the Colville and Shannon Green condominiums where Nobles was living and working as a security officer at the time he was killed.

Cedar Posts: I know what you are thinking, "Vandals"!!! No it apparently was the condo homeowners association or management company.

It had stood there for 20 years but no one can say when it was removed.

“It was thrown out like a piece of trash and that's what hurts,” said Jerry Esposito, a retired CMPD officer who managed to get a local towing company to pull the monument made of solid granite out of the creek.

He called the homeowners association of that condominium complex and said they told him they asked a landscaping company to take it away.

“They advised me they no longer had need for it or wanted to retain it,” Esposito said.

He said the people he spoke with did not know that it had ended up in the creek a block away.
Posted by Cedar Posts at 8:06 PM

Don't ever let me come in contact with the asses that had no further use for it or those who removed it and tossed it.

How can they live with themselves?

It's best I stay in my own world up here at LKN.

Where is the monument now?

It was a long time ago and nobody cares about anything more than about a month long anyway so I guess they figured "screw it" who would care??? How many times has the monument at Sharon Memorial been defaced and damaged? But whatever you do...don't put a pair of shorts on the MLK statue and tape a basketball to his hand or they will start a Federal investigation!! Allegedly.....

And it's headed for a clean up and put up on one of the running trails out at the academy Whit.

as police, we should all be outraged at this blatant sign of disrespect for our fallen brother...

That is the way it is now; society is declining and hating the cops for the offenses of a few bad apples over the years fits the narrative of the perpetual victim that folks seemingly so much want to be.

99% of folks in the US don't know what an oppressive government actually is. Of the 1% that do, very few of them know from real life experience.

This kind hatred towards police in the name of perpetuating some dystopic struggle between minorities and the government will secure the very conditions that these so called "strugglers" wish to thwart: government overreach and government oppression.

Know your neighborhoods, know your local citizens, and figure out which ones in your RA will have your back if things get really bad. This means considering officer safety and community policing on a whole new level. Using officer discretion in a deliberate fashion is not out of the question to forge and preserve these relationships.

I remember an officer some time ago that gave me a piece of solid advice that stuck with me. He said (and I paraphrase) "Act right with everyone and treat them with respect. Be cool with the guy you're dealing with. You never know when you'll be getting your ass handed to you by someone and that guy will be the only one in a position to help you out."

Figure out who will CYA no matter what, then try to convert all others over that you can.

You can look at this one of two ways: It may keep you safer, but it may also enhance the reputation of CMPD officers in general. This contributes to overall officer safety, but will also offer some leeway when shootings, tazerings gone wrong, or other unsavory occurrences pop up in the media.

You can look at it two other ways: Imagine you are the only CMPD officer on patrol--period. Citywide, no backup, no brass, no snoopy. Build a network and establish rappaport so you can reasonably preserve your safety under these conditions. Don't get IA stupid, but use you head, get creative, and figure out what you can do below the radar. Could you survive this way? If you think you don't have a chance at surviving under these circumstances, then you have improvements you can make. Or(#2), build that same network and establish that same rapport knowing it will go a long way when others encounter your coworkers and you are not there.

Build your networks today. If you have them, grow them and reinforce them. Tomorrow it may save your life or that of someone else (or, conversely, may prompt for better leads, tips, info etc etc). In the long run, a positive citizen contact today may mean a source of intelligence or other information down the road. Screw the young millenials. Let them chant, let them talk shit, protest and be generally retarded as young people usually are. Focus on everyone else, 25+ from all walks of life. If you do this day in and day out, the young idiots will grow into a group of peers and elders that are in line with your mission.

Use your head; what comes on the duty belt is a secondary set of tools. The citizens in your response area, though challenging at times can be assessed and engaged to incorporate at least some of them as assets for intelligence, opsec, etc.

Some may disagree with my views on the importance of this, but I doubt anyone can explain how it will hurt the situation. Too hard you say? Plenty of other jobs are out there and waiting on you.

I'll sign off now; my tin foil hat is getting sweaty.

Funny how there is nothing on your list about building community support for police by actively rooting out the bad ones. THAT is the reason non-criminals are fed up. Rodney Monroe and his merry band of liars, abusers, thin blue liners.

I hope you are safe out there and hope citizens will always do the right thing and help police. But the problem you have is all these years of helping under-trained, over-stupid, psycho, lying dirt bags run around with you on patrol by covering up misconduct and crimes. Maybe you could work on that, too.

I agree and should have listed it. Kind of goes without saying, though sadly it is tolerated.

It is very sad that CMPD did not pay to have this monument moved out of respect for the fallen brother and his more than 1000 plus brothers and sisters on the force. CMPD should have taken ownership and brought it back home. This is the least they could have done instead they let dome dbag dispose of it in a creek. One can only hope that Putney will be a better steward to his fallen brothers

Hawthorne Management advised that they do not manage Colville Apartments and was unaware of the situation.

I pledged $1,000 to the restoration cost to clean up and set on the academy grounds. He is not forgotten and this selective morality crap has to stop. Brothers who gave the ultimate sacrifice deserve it. Brothers on the job still who don't step up shame on you. I am doing this for him not you who are unwilling to do anything for your brothers. Think GREENS HOT DOG STORY When I was an out-of-town applicant you'll know who I am Sgt Neal.