Quietly with out any fanfare beyond close friends, perennial politician Andy Dulin slipped back into politics. 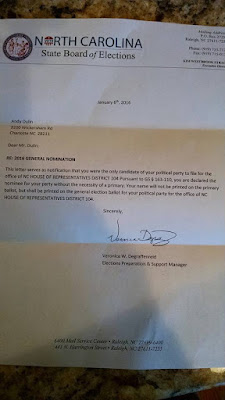 This came in today's mail. Some of you know that I am a candidate for the NC House of Representatives, seat 104. This letter confirms that I am indeed the Republican nominee in the November election. You don't get this type of letter very often. I am excited, humbled and honored at the opportunity to serve Charlotte as a member of the NC House. Lots of work still ahead but gosh it will be fun.

Dulin's Facebook post might as well be his acceptance speech for the District 104 seat in the decidedly Republican SouthPark district.  Dulin will replace Republican Dan Bishop who is running for the North Carolina State Senate Distict 39 seat.

As the letter confirms there was no Republican challenger so Dulin's name will appear on the November 8, 2016 ballot avoiding the May Primary.

Democrat Peter Noris met the moved up December 21, 2015 filing deadline and will challenge Dulin in November. Noris was also the sole democratic applicant for the district 104 seat.

While Bishop did not face a Democratic opponent in the 2014 election Libertarian candidate Eric Cable did manage to collect 25% of the vote.

Cedar's Take: Barring any surprise issues Dulin's campaign should be a lock for a landslide win in November. We'll keep you posted.

corrupt moron. big bunch of nothing announcement. probably hoping he'll get in before anyone notices.

Not good for Charlotte. This wooden headed puppet is a McCrony clone- clueless about how the world operates outside his simple little bubble.
What happen to politicians that are voted on to serve the people vs the people serving them?
Heck, if we're bringing back past ineffective losers, why not nominate Lynn Wheeler?

Is there any bigger numskull who is more open to payoffs than this idiot? How is it possible we can't get more than two or three NC politicians that are honest, work hard, care about their jobs of honest representation and improving lives of constituents by passing and upholding good laws (and striking down bad ones)?