Fall Out Over HB2 Continues But Wait.....

The list of companies and entertainers canceling shows, conventions and events is long and repulsive. The NBA pulling out is beyond comprehension.
All of this because the poor maligned LGBT crowned doesnt feel safe being required to use their gender assigned restroom in North Carolina.
Yet of all the cancelations and boycotts just who isn't jumping on the PC bandwagon? The very people everyone else is trying to show solidarity behind. 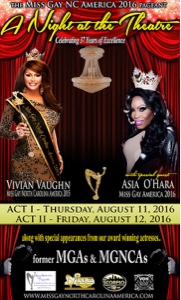 Yep that's right kiddos Miss Gay North Carolina pagent will go on this weekend as planned right here in the heart of homophobic North Carolina. Hysterical that the loudest voices, those crying discrimation and pleading fir support of their course aren't concerned enough to join the boycott.
Apparently North Carolina's backwards laws aren't that big of a deal after all,
Doesn't the NBA look stupid now?
Posted by Cedar Posts at 5:57 AM

A Night at the Theater??? Must be a Tragicomedy....

I think it's nice that local people aren't dumb enough to be driven away from an event they want to hold here. National press should come cover this event. Some protesters should show up in basketball uniforms and ask to use the bathrooms, where I'm sure the nice people running this event will welcome them in with open arms. To all the bathrooms. They may have to be shown which bathroom is for their use. I'm not saying it won't get confusing, but maybe everyone will lighten up a bit. It will probably be an evening for adults, so no one will cry pedophile.

Most people who identify as the opposite sex of what they were born (which is the issue regarding bathrooms everyone is talking about) have no improper urges toward children. Do the research. The problem is that Mayor Roberts who started the issue for her own personal political glory and not because there was any safety issue for anyone started by hanging her hat on one particular gay (not transgender, to my knowledge) man who had a long history of sexual abuse of many underage children--I guess you have to say allegations--because he was only prosecuted and convicted for one. But research and read. There were many victims that came forward. That is one gay man, not all. Many men who appear to be otherwise straight and married are sexual predators of children of both sexes. Unfortunately, this man was KNOWN as a sexual predator by the members of the group he was leading and still permitted to be the "leader" of the group and unrepentant spokesman.
Politics. No change. No apology. Just deny and carry on.
How dumb is Jennifer Roberts? How dumb are the people that voted for her? How did that even happen when her entire party essentially voted no confidence in her prior to that?

What will be the internal dialogue about this event going on here?
That will be interesting to see. All the other boycotts are only hurting other good people who work hard in service industry and with many small local businesses--the primary damage is done to them. The impact is only playing politics and costing residents, meaning schools, roads, jobs, projects for long term impact. And making it impossible to sue for real discrimination of all types in the workplace and other areas. But nobody's paying attention to that.