Jim Rhyne's memories are lampposts along a forgotten road.

They help us see the unsung early days of North Carolina's highway patrol.

Leaving Lincoln County in 1939 to become a trooper, Rhyne had a colorful career that included chasing moonshiners over dizzying mountain roads.

Rhyne, who turned 91 Saturday, worked manhunts and roadblocks, hurricanes and routine traffic stops. The N.C. Highway Patrol was born in 1929, the year the stock market crashed.

Rhyne came on board 10 years later. He lived in the Long Shoals community of Lincoln County and worked in a textile mill.

Rhyne spent June, July and August at the patrol's Basic School in Flat Rock. A classmate was Ed Guy, later known as the “father of the Breathalyzer” system in North Carolina.

The starting salary for a trooper was $100 a month. Rhyne drove a sleek new Ford coupe, known as a “Silver Bullet.” 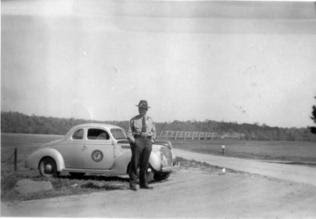 Trooper Jim Rhyne standing next to his 1939 Ford coupe,
“The Silver Bullet.” COURTESY OF THE RHYNE FAMILY
The car had no heater or air conditioner. The radio had better night-time reception from South America than North Carolina.

Rhyne wore a felt hat, and his uniform was the same weight in the summer or winter.

During Rhyne's years as a trooper, he also chased many a moonshiner.

“One incident stands out in my mind,” he told me. “I stopped this car and he (the driver) had taken out the back and had a blanket with his children sitting on it. And underneath the blanket were 5-gallon cans of moonshine.”

Rhyne's tires squealed all over country hills and hollows, and staying on the road was sometimes a challenge.

“The roads were paved but very crooked,” he said. “When chasing moonshiners, I cleaned out more ditches than the highway department did.”

Rhyne and his wife had honeymooned at Fontana Village Resort in 1952 and liked the area so much they settled there when they moved back to North Carolina.

Away from the city, fishing, hunting, golfing and gardening took up much of his time. He was proud of his three children. A son, James III, is retired from the Florida State Highway Patrol and teaches Criminal Justice at the University of Central Florida in Orlando.

Rhyne saw his job this way: “A state trooper is not out there to catch you,” he said. “He's working to make it safer to travel.”
The above story is by Joe Depriest a Charlotte Observer columnist who writes great stuff and serves as the perfect filler when Cedar Posts finds nothing of importance to drone on and on about.
Posted by Cedar Posts at 5:05 AM