Imelda Marcos, Michael Jackson, Donald Trump are all big spenders, equated with lavish and insane waste, but they have nothing on the Wall Street Poster Boy of Greed and Excess, John Thain. 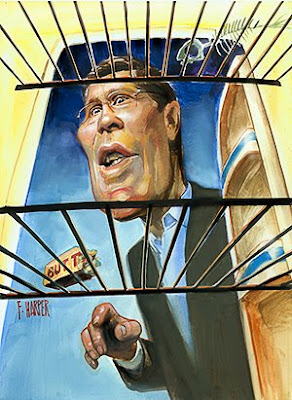 The former Merrill Lynch & Co. chief executive officer who was ousted yesterday, apparently cleaned out the Bank of America refrigerator by spending like there was no tomorrow, including $1.2 million redecorating his office, with such necessities as a $1,800.00 trash can, $87,000 chairs and a $27,000.00 rug last year as the company was laying off thousands of employees.

According to CNBC Thain hired Los Angeles-based decorator Michael Smith, also chosen by President Barack Obama and his wife Michelle to redecorate the White House. Thain paid Smith $837,000 and his purchases included $25,000 for a pedestal table and $68,000 for a 19th century credenza.

Tales of excess worthy of the last days of the Roman Empire continue to emerge from the offices of the Thundering Herd, where Mr Thain has for the past year been running the show.

Even as Merrill Lynch burned, and the US Government was forced to hose it down with tens of billions of dollars of taxpayers' money, while the bankers and investment managers continued to pay themselves as if in they lived in a boom town during the gold rush.

It didn't take long for Thain's damage to occur, as the clock ticked down on the Bank of America takeover, Thain among others pushed through year end executive bonuses totaling over 3 Billion. Normally the bonuses would have been paid in the first quarter and Bank of America management would have certainly balked.

When the Bank of American - Merrill Lynch deal was first announced, Mr Thain was hailed as hero of the hour for persuading Bank of America to pay what by today's standards seems an outrageous price of $50 Billion for what now was clearly a "Pig in a Poke".

Ken Lewis, chairman of B of A, believes he was duped, and most certainly he was, for it was his complete lack of due diligence concerning Merrill and Thain who also wrote himself a hefty 15 million dollar signing bonus and until November was still toying with the idea of paying himself a 10 million dollar year end bonus, that will eventually sink Lewis and perhaps Bank of America as well.

All Mr. Lewis had to do was Google John Thain, and he would have quickly discovered Thain's lust for excess. John Thain's country estate is so big that the palatial country home spans three separate towns, has five separate addresses and he pays property tax in excess of $150,000.00 per year in two districts. 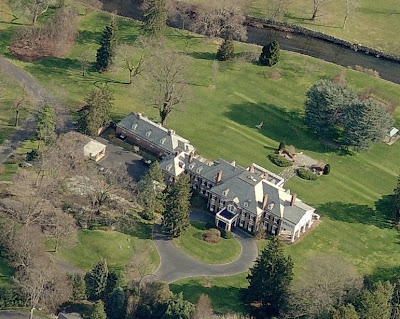 The home dwarfs his neighbors, and river runs through his massive backyard, while a lake stocked with fish borders the property in its northwest corner. But this is trivial compared to Thain's Park Avenue duplex that is worth somewhere in excess of $27.5 million.

John Thain has his priorities set on fun, because as the losses and sense of crisis mounted at bank of America, Mr. Thain flew off for a skiing holiday in Vail, Colorado.

Then last night he was unceremoniously ousted.

Thain, 53, oversaw the sale of Merrill Lynch to Bank of America Corp. last month, and took over the bank’s wealth management and corporate and investment banking divisions. Merrill’s $15.4 billion fourth-quarter loss forced Bank of America to seek additional aid from the U.S. government, which last week agreed to provide $20 billion in capital and $118 billion in asset guarantees.

In light of Merrill’s $56 billion in losses from subprime loans and the credit crisis, $1.2 million spent on antiques hardly seems worth getting outraged over, says Clinton Howell a New York English Antiques dealer.

“What John Thain did with his office is a little like noting that somebody failed to turn on his blinker before driving into a train,” said Howell.

Wall Street executives may no longer be able to spend lavishly on perks, said James Post, professor of corporate governance and business ethics at Boston University School of Management.

“That’s symbolic of a pattern that has developed on Wall Street over this past decade of more and more extravagant, more and more lavish, more and more one-upmanship in all of these visible symbols,” said Post. “This may be the last vestige of a culture that we’re not going to see for many years to come.”

What amazes Cedar Posts about this latest round of Wall Street ills is not that Congress has failed to act, how can they?, as most are of the same breed. What I find shocking is the lack of serious public outcry.

If you have a retirement plan, 401(k), pension plan, trust fund or a mutual fund you own Bank of America stock, and you most likely owned Merrill Lynch as well. Institutions still own nearly 61% of BAC.

BAC was trading in the mid forties last year, today the stock is bumping 4 dollars. Let's face it stocks have no trouble loosing 50% but gaining 100% to return to the pre crisis price is nearly impossible. So what about a stock that losses 90% of its value?

The general consensus is that Bank of America is worth around 2 to 4 dollars a share, or less. The dividend that was cut recently will most assuredly be eliminated altogether. Though Banks like to claim they have never missed a quarterly dividend, so they may opt for the ceremonial penny.

If your broker/investment adviser is telling you Bank of America will come back, fire your adviser.

That said, we should focus on the bigger picture, because this is bigger than just Corporate America.

Common sense is truly absent in Washington as well. Why would you "invest" billions to rescue the economy, spur growth and create jobs in a Global Bank or any large conglomerate?

Why would you give billions to Bank of America or Wells Fargo to buy up other banks only to have them lay off thousands of employees in the process?

TARP has come to be, not a bail out of troubled banks, but a funding mechanism for greed and the corrupt corporate culture of men like John Thain who rape our county and our neighbors.

ENOUGH!
Posted by Cedar Posts at 9:00 AM

His greed is nothing to many of Washington's elite!

I found this site using [url=http://google.com]google.com[/url] And i want to thank you for your work. You have done really very good site. Great work, great site! Thank you!

Could not find a suitable section so I written here, how to become a moderator for your forum, that need for this?