Here in the United States we have watched news accounts, albeit somewhat limited news accounts of the Great Traffic Jam in China. Reports are that the mess started 9 days ago and is now some 60 miles long.

From SkyNews in London:

A traffic jam stretching more than 60 miles in China has entered its ninth day with no end in sight, state media reported. 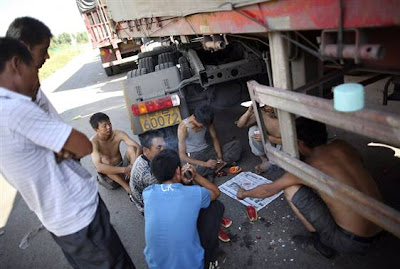 Cars and trucks have been slowed to a crawl since August 14 on the National Expressway 110, which is also known as the G110, the major route from Beijing to Zhangjiakou, Xinhua News reported.

Officials expect the congestion to continue until workers complete construction projects on September 13, the report said.

One of the first stories I ever read in my Quail Hollow Junior High School library was a 1979 fiction piece in Omni Magazine titled "The Great Moveway Jam" by John Keefeauver.

I remember the story of a traffic jam that extended for miles and lasted for months and the government decided on a simple solution, which was to build walls along the sides of the road expressway, and later fill the walls with concrete, encapsulating all the cars and drivers in a concrete tomb, to which a new highway would be built. Problem solved.

I've always thought it odd that the story has stuck with me all these years, until now. A quick search of the wonderful "net" and I find there are other sci-fi sickos who remember the story.

And much to my surprise ta da here it is.

Part One is Here

Part Two is Here
Posted by Cedar Posts at 11:27 AM

Great! just found the pdf photocopied
version you've made available.
Thank You !!
I subscribed to Omni for a few years.
I actually photocopied this story from my issue to loan out.
With the latest news about "carmagedon" in LA, and this summers nightmare of roadwork in Montreal, I wanted to re-read the story.
I knew I could find it on-line !