In Case you Missed it Robert Gibbs Last Day 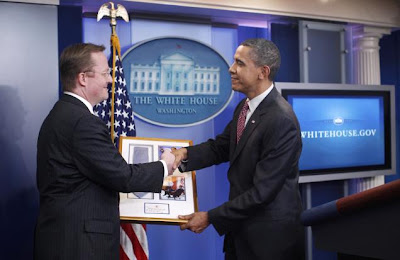 The President had borrowed the tie during the Democratic Convention at Boston in 2004.

U.S. President Barack Obama has returned to outgoing Press Secretary Robert Gibbs the tie he had borrowed to deliver the key note address to the Democratic Convention at Boston back in 2004.

“I wanted this on the record, on camera....that I’m finally returning Robert’s tie,” Mr. Obama told reporters, handing over the tie to Gibbs in the White House Press Room.

Mr. Obama surprised White House reporters as he entered the Press Room with Gibbs and his other aides’, minutes after he delivered his speech on the developments in Egypt.

“Obviously, Gibbs’ departure is not the biggest one today,” he said amidst laughter.

Referring to the opportunity that he was given at the Boston Democratic Convention, Mr. Obama said, “A lot of you think that probably most attention was devoted to the speech that I delivered, the keynote speech in Boston, but in fact actually the most challenging problem was what tie to wear. And this went up to the very last minute.

“I mean, 10 minutes before we were about to go on stage, we were still having an argument about ties. I had bought five, six ties. And Michelle (Obama) didn’t like any of them. While all this discussion was going on some one among them pointed out towards the tie that Gibbs was wearing......That’s the tie that I wore at the national convention.”

Handing over the blue tie locked in a glass frame, the U.S. President said, “....I’m so proud of him. Everybody here loves Robert. He’s going to be working closely with us. I don’t think we could have a better Press Secretary.”

Cedar Suggests: Further reading on White House Press Secretary Gibb's departure from the Washington Post which is here.
Posted by Cedar Posts at 3:58 AM