Mikheil Saakashvili on Putin Kicking Obama To The Curb

Right now I am sharing (an) experience with our Ukrainian brothers and sisters in Kyiv (Kiev) on something we Georgians have known too well: hundreds of Russian tanks, armored vehicles and grad system crossing an international border and attacking villages and towns.


And the world hesitating (on what) how to call it.

Well, it is neither a separatist conflict, nor a terrorist attack, even less a “Russian counter-attack" when did Ukrainians attack the Russian territory?

It is an invasion. And a war.


Why won’t the international community call it by its name? I think there are more important things going on in our region now than just pouring ice water on one’s head. The fate of Ukraine, Georgia and all Russian neighbors are now at stake in Donetsk, Luhansk, Mariupol. 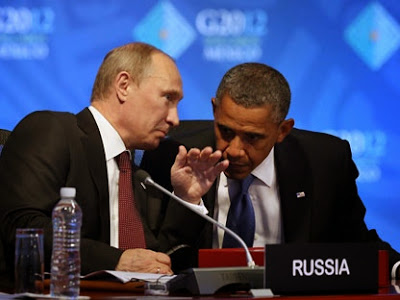 Cedar's Take: Flash Back to 2012 when the Obama Administration and the main stream media mocked the Presidential candidate Romney for referring to Russia as “our number one geopolitical foe.”
Even as recently as March of 2013 A New York Times editorial said Romney’s assertions regarding Russia represented either “a shocking lack of knowledge about international affairs or just craven politics.”
And who could forget Obama mocking Romney a Presidential debate in 2012:
“The 1980s are now calling to ask for their foreign policy back because the Cold War’s been over for 20 years.”
The Obama foreign policy has been a dismal failure, but its not just "Barry" the president has surrounded himself with psychopaths and leg humpers. Staffers and appointees who have not a clue of real world outside of the White House.

Our intelligence agencies are apparently blind even though we have the most advanced technology the world has ever seen.

And why is Putin pressing the sword to the Ukraine? One reason is that the Russian economy is in a tailspin and nothing unites and distractes the Russian people like a cause for preservation of the "mother land". The other because Obama is the weakest leader this country has seen since Jimmy Carter.

Two years from now we may be on the route to "hope and change" but it will be too late for the Ukraine.
Posted by Cedar Posts at 8:07 AM

Obama in March 2012:"This is my last election. After my election I have more flexibility."
President Medvedev: "I understand. I will transmit this information to Vladimir. And I stand with you."
Why would Putin worry about US reaction to anything?