Steve Smith Is a Raven Now

Sunday morning Steve Smith was known as a former Panther.

Now, in the pre dawn mist of Monday morning, Steve Smith is Raven and 1/4 of the way through the season, Baltimore is better because of it and the Panthers are not. 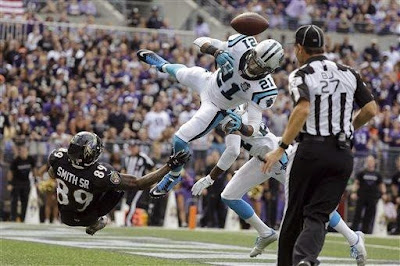 Smith's performance was a much needed respite from the ongoing domestic violence saga at both teams.
Everyone expected Smith to turn it up, but Smith never was a slacker or on and off player.
“Yes, [the Ravens] have two [Super Bowls], Carolina has zero. I know I went to public school, but two plus zero, I’ll take that. They understand. They know, and they have the recipe. It says a lot without even saying anything, and that’s one of the reasons I wanted to come here.” Steve Smith Senior on what's different about being with the Ravens
No one can say Steve Smith ever had a game where he gave less than 100%. And Sunday was not different. 7 receptions, 139 yards, 2 Touchdowns and a number of very near misses, giving Smith more than 400 yards on the season. 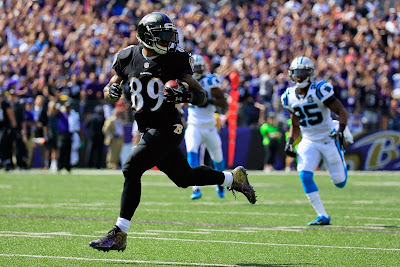 It may take the Panthers all season to recover from this Ice Up Son moment!
Call it what you like, karma, vindication, redemption, validation whatever you like but 10-38 really was blood+guts everywhere as Smith schooled his former teammates. 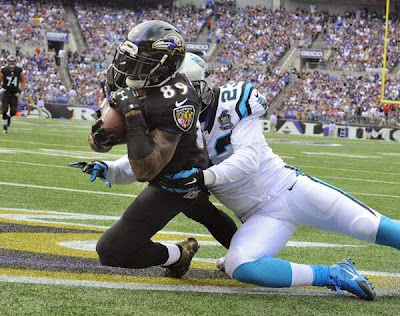 Finally one touchdown would have been enough, but the 10-38 rout was a beat down that was simply beautiful as it was unscripted.
It wasn't just payback time for Steve Smith Senior, it put a smile on the faces of thousands of Steve Smith fans in the Carolinas and anyone else who has ever been wrongly or unfairly fired from a job they loved.
The proverbial middle finger to Gettleman, Richardson and Riverboat Ron, in the way that only Steve Smith could do it, all class total class.
“That film was a coaching session. They’re going to be coaching. I’m 35 years old, and I ran around those boys like they were school yard kids". - Steve Smith Senior
The entire post game Steve Smith Senior transcript is here.

Rodney Monroe traded Steve Smith (SR) to the Ravens to throw off the CIA/HSI/DEA/ATF/MOUSE investigators who "any day now" will bring down the hammer of justice!!! Oooohhh the humanity of it all!!!