Brian Williams and What's Wrong With The News Media in 2015

As I listened to the ongoing debate over the future of Brian Williams at NBC, I couldn't help but think about what it takes to be a good reporter, a scribe of history and diarist of mankind.

Perhaps one of the greatest war correspondents of WW II Ernie Pyle missed out on the D-Day invasion. But that didn't stop him from telling the story and telling it well: 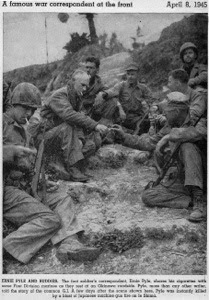 OWING to a last-minute alteration in the arrangements, I didn't arrive on the beachhead until the morning after D-day, after our first wave of assault troops had hit the shore.

By the time we got there the beaches had been taken and the fighting had moved a couple of miles inland. All that remained on the beach was some sniping and artillery fire, and the occasional startling blast of a mine geysering brown sand into the air. That plus a gigantic and pitiful litter of wreckage along miles of shore line.

Submerged tanks and overturned boats and burned trucks and shell- shattered jeeps and sad little personal belongings were strewn all over those bitter sands. That plus the bodies of soldiers lying in rows covered with blankets, the toes of their shoes sticking up in a line as though on drill.

And other bodies, uncollected, still sprawling grotesquely in the sand or half hidden by the high grass beyond the beach. That plus an intense, grim determination of work-weary men to get that chaotic beach organized and get all the vital supplies and the reinforcements moving more rapidly over it from the stacked-up ships standing in droves out to sea.

The rest of Ernie Pyle's report on D-Day is here
It is interesting to note that there was no dishonor in not landing on the beaches in the first wave, in fact there is perhaps a note of relief in the words Pyle chose. Throughout Ernie Pyle's reporting of the war in Europe which is complied in a book titled Brave Men (Henry Holt and Company) (I'm holding a first addition 70 year old copy in my hands) he speaks of brave men.
IN SOLEMN SALUTE TO THOSE THOUSANDS
OF OUR COMARDES-GREAT, BRAVE MEN
THAT THEY WERE-FOR WHOM THERE
WILL BE NO HOMECOMING, EVER.
It is impossible to know if he embellished the facts, but it is certain that being embedded in 1944 really meant embedded and not just showing up with a flack jacket and helmet after a night in a fine hotel with hot and cold running water and a five course dinner.
A little side bar - Page 384 Pyle speaks of "Lieutenant Wallace Gibbs, of RFD 2, Providence Road, Charlotte North Carolina. A family friend. A business partner of my father. The story is here.﻿
Posted by Cedar Posts at 10:47 AM

Was the reporter in the movie "All about Steve" based on Brian Williams?

You cant expect to get real facts from the news anymore. They should have a disclaimer at the bottom of the screen stating "for entertainment purposes only".