In an overly PC world it's never a good idea to make fun of the most maligned and marginalized of minorities the Transgener individual. But the Bruce Jenner saga just happens to be too good to pass up for some people. 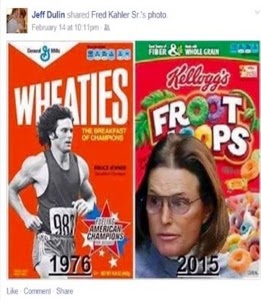 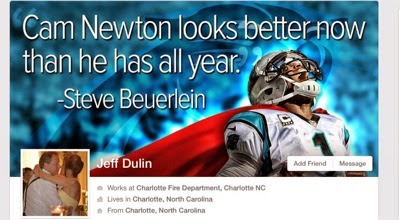 The post has now been removed, from Chief Dulin's Facebook page.
But if CP's hearing things correctly Dulin had a rather short meeting with Charlotte Fire Department Chief Hannan, after which the Jenner Fruit Loops meme was removed.
Interesting that DC Dulin's Facebook status was not updated to "unemployed" as well.
DC Dulin's insensitive post, was clearly in violation of the department's written  abiet loosely worded internet policy. Even though Dulin identifies himself on his Facebook as a firefighter with CFD he is apparently immune to any punishment, much less under any threat of being fired.
Posted by Cedar Posts at 1:31 AM

The city better just go ahead and settle with that girl, along with an apology. They are lucky that there is no entity to investigate and prosecute whistleblower retaliation and kickbacks, but the longer this goes on, the higher the final price tag.

So let me get this, The Deputy Chief of the Charlotte Fire Dept clearly violated city policy anddddddddd its blown off.

If this doesn't solidify that Mrs. Eschert was fired for whistleblowing vs all the other BS smoke Carlee and Hannan are blowing around, I'm bot sure what else will.

Beat the woman down for standing up and speaking up for the safety issues in arson building,spot on i might say. This also brought out wasteful spending by CFD and city. But let a leader of the Charlotte Fire Dept and a man of the community make fun of gays and transgender, its ok. Yes I'm saying its ok, because thats what Carlee and Hannan are doing. So what does that say to some employees of CMPD,CFD and city. Its okay, really it is, to make fun of others.

Wonder how often the city interns spent in his office, learning about the job of women in the profession.

Hannan is a disgrace to the uniform and to the Charlotte Fire Dept. He has tarnished the dept and city with his animal house behavior, failed ethics and no backbone. Just a sexist that hates women. Remember he doesn't pay women to have babies.

Carlee is just as bad to not stand up for all citizens of Charlotte. I hope his contract is about up and the city moves on to someone that will clean up this disgrace.

This truly is the worst cover up and these guys keep falling on their faces every step they take. Wonder what that investigator thinks now??? Because if I were her, this case is closed!!! Mrs.Eschert is vindicated!!!

Jeff Dulin's Facebook page has vanished, no surprise there.

His besties were all Chief Hannan's goons and yes men and of course Hannan's wife. Just a little odd.

Waiting on WSOC's hit piece in less than 15 mins.

Hope they blow the lid off this cover up.

"Animal House" behavior doesn't even begin to explain the culture of the Charlotte Fire Department! Every station and every division acts this way! FAILED LEADERSHIP!!!

Whoever you are there is not an "animal house" mentality going on. Lots of good work being done for the citizens. HQ is just full of crap at this time Morale is definitely down but good work is still being done. A good housecleaning is in order.

I've got to say they are all top shelf.

Not sure what's up the people at the top, some sort of elitist mentality.

I find Dulin’s Facebook posting callously insensitive and derogatory. This is exactly like the Crystal Eschert situation --- Both of these “public servants” have called into question their ability to be perceived “by all” as impartial and non-discriminatory in carrying out their duties. As such, both cases should be addressed in the same manner.
Perhaps it is time for CFD recognize the need for Fire Department staff to attend apparently much needed, “sensitivity training”.

The Dulin situation should be addressed in like manner to Eschert --- whether the final determination is firing for both or CFD changes its position to the Charlotte Observer's recommendation of suspension/training/apology for both of them --- since the Observer article finds BOTH posts EQUALLY offensive and out-of-line.

However, if Dulin does lose his job, will he also take Eschert's path and rationalize some excuse, other than the content of the Facebook posting, as the reason for termination.

There is no "animal house culture" mentality going on in the fire houses in Charlotte. You do not have a clue until you have worked in that environment where you develop work families. Just like any organization, people will and do make mistakes. Has the administration made some bad judgment calls. Absolutely. Knee jerk reactions? Absolutely. Should Chief Dulin be reprimanded for his FB post? Probably. Fired after 32 years of service in which he played an instrumental role in moving CFD to the national forefront as a leading provider of fire protection and ems service? A big fat hell NO!!!! Bad judgment on the FB post whether he posted it or just liked it. Bottom line, it was a bad poke at someone outside the norm. But come on people. Leave your politically correct feelings at the door. Look in the mirror. Have you never made fun of something or someone? CFD provides excellent service with excellent fire fighters. That will not change. Would you agree to losing your career if you had a lapse in judgment??

"Animal House" behavior doesn't even begin to explain the culture of the Charlotte Fire Department! Every station and every division acts this way! FAILED LEADERSHIP!!!

I bet ole Deputy Chief Granger is sighing with relief now that someone else is in the spotlight. How quick we forget the chaos he created in his treatment of employees, especially females. His lies and deceit. No telling how much he cost the city in legal fees after firing female employees without documentation or justification. And still yet......he is allowed to control the hiring process for new employees.

Dulin is a crooked as the Thugs that run wild in our streets.

A thief is still a thief one with a credit card or a gun the crime is still committed and Dulin needs to go.

Hearing that Dulin will retire in order to save the Chief and his lies regarding Crystal Eschert.

Really sad all the negative comments about the Charlotte Fire Department. I know first hand it's a great organization. People make mistakes and at times, use bad judgement, we're only human and not perfect. As far as the FB thing, we are losing the liberties of having our own opinion for political correctness.

The posts by both Eschert and Dulin were equally offensive, albeit targeted against different sectors of the community. Each of these public service employees have caused, by their in appropriate postings, a portion of the community they are meant to serve to potentially call into question whether they will be impartial and non-discriminatory in carrying out their duties.
Firing both individuals is, assuming they have otherwise good records, in my opinion too severe a penalty. It has been suggested that unpaid suspension time, a public apology and attendance at "sensitivity training" would be appropriate --- and I agree.
Mr. Dulin has already issued a public statement accepting full responsibility for his inappropriate action and offering an apology. Assuming, after any other CFD-determined penalty (e.g. unpaid suspension time) is levied, he is permitted to keep his position--- Mrs. Eschert should be afforded the same opportunity. That is, to "publicly" accept full responsibility and offer apology for her inappropriate posting ---and take any other CFD-determined penalty (e.g. unpaid suspension time)---- at which point she should be reinstated to her prior position.

The posts by both Eschert and Dulin were equally offensive, albeit targeted against different sectors of the community. Each of these public service employees have caused, by their in appropriate postings, a portion of the community they are meant to serve to potentially call into question whether they will be impartial and non-discriminatory in carrying out their duties.
Firing both individuals is, assuming they have otherwise good records, in my opinion too severe a penalty. The "Charlotte Observer" has suggested that unpaid suspension time, a public apology and attendance at "sensitivity training" would be appropriate --- and I agree.

Mr. Dulin has already issued a public statement accepting full responsibility for his inappropriate action and offering an apology. Assuming, after any other CFD-determined action is levied (e.g. unpaid suspension time, sensitivity training), he is permitted to keep his job --- Then Mrs. Eschert should be afforded the same opportunity. That is, she "publicly" accepts full responsibility and offers apology for her inappropriate posting ---and she accept any other similar CFD-determined action(e.g. unpaid suspension time, training) that is given to Dulin ---- at which point she should be reinstated to her prior position.