The story about a Texas firefighter who shot two dogs who were “trespassing” on his property has gone viral after he posted a gruesome image of the dead dogs to Facebook and Twitter.
Tim Conatser, says that he warned the dogs’ owner to keep the dogs off his property, but the warnings were not heeded. Therefore, he says he shot the two labrador retrievers when they “attacked” his cattle.
According to Fox News, Pulido Rodrigo is the owner of the two labrador retrievers that were gunned down by the hobby hose dragger in Hunt County, Texas.
Rodrigo says he found out about the death of his dogs after seeing a photo uploaded by Tim Conatser on Facebook. The image showed his two dogs, Gordo and Spike, lying on the snow covered ground that can be seen stained with blood. Rodrigo says he is “in shock” and “doesn’t understand these people.” 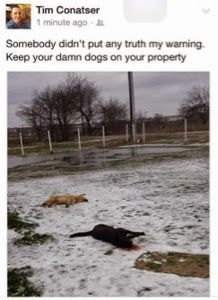 Not surprisingly Conatser has received countless death threats and has apparently been fired from the local fire department.
As anyone who owns a Lab will tell you they are the most timid dogs on earth. Conaster's story that they were attacking his cattle in his barn just doesn't pass the smell test. It doesn't help that he posted a photo of the dead dogs in a field and not his barn,
The story wouldn't have gained much traction if they were Pit Bulls or Huskeies, but Conaster whose IQ equals the rural speed limit might as well of shot a couple of Chihuahuas.
Yet there is no need for death threats, as Conaster is doomed to the same fate. That is just how karma works. A macabre end to his life a culling or purge of sorts, time and place yet to be determined.
Posted by Cedar Posts at 8:55 AM