Charlotte Police Chief Rodney Monroe Gives Himself a Promotion It's Good To Be King!

You might have missed this, and of course that's what Charlotte Police Chief Rodney Monroe was counting on. 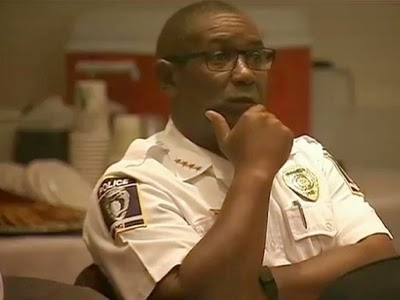 Ever since Monroe came to Charlotte he has voiced his displeasure with his uniform. At first it was the duty shirts, Monroe felt command should be set apart from rank and file. Shortly after his arrival he ordered white shirts for the department's command staff at a cost of thousands, to replace the blue shirts worn by his predecessors.
Then he added his admirals stripes. 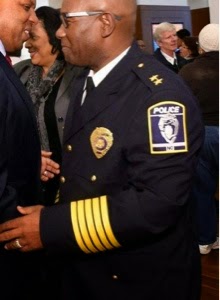 But Monroe has always hated the two stars on his collar. 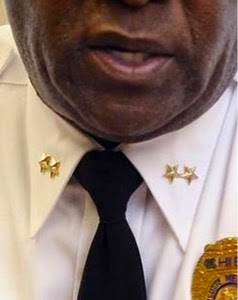 Apparently Monroe felt it was only right that any recipient of the state's Order of a The Long Leaf Pine have four stars on his collar. 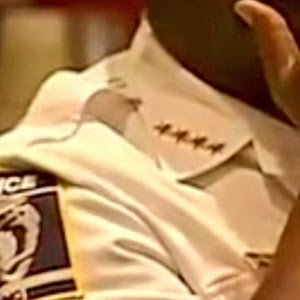 And so by executive order or just because he felt like it Monroe showed up at the city budget meeting wearing four stars.
Charlotte's Chief of Police has always worn 2 stars. But tradition be damed Monroe promoted himself just because he could.
It's good to be king!
Posted by Cedar Posts at 5:55 AM

The only thing that surprises me is that he didn't opt for the traditional General of the Army insignia. I'm sure that Obama would have personally appointed him.....

Haha that's great! Maybe it was that douchebag tEstes idea. Even when he was a REMF in the Marines he wanted to be a General so if the chief has 4 maybe he figures he could give himself 2!! I don't feel so bad about baggin his ex-wife years back now.

It doesn't matter to me if he has five stars and declares himself supreme allied commander.

Fact is he doesn't respect the department, tradition or the boots on the street.

He doesn't give a rats ass about anyone but himself.

I'm sure he got it approved by some slight of hand or some approval from that gay ass douche bag Ronny Carlee.

No way city council would challenge him on it even if he didn't.

But what do the guys on the street think?

What do the guys on the street think? At this point I don't think they are surprised by anything that comes from the unicorns' office!

I don't have a dog in the hunt since I live in Rock Hill.

But I'd guess Charlotte City Council approved the change?

Wonder where he will cut the department's budget when the across the board 1% gets cut due to the 16 million shortfall that was announced yesterday. Good thing he has already purchased those stars.

Rodney suffers from a Napoleon complex as do many little short Dudes.
This is just another example of his out of control egomania.
He looks like an ass with all of his paraphanalia..or Idi Amin.
Many in the Dept. desperately hoped Carlee would see him for the bullying thug he is and get rid of him or at least keep him on a short leash.
Alas it seems Carlee has chosen to enable Rodney's corruption and ego.....shame that.
It takes a small man to think make believe plastic stars will make him a big man and command respect.
He is a laughingstock.

If he continues on his current path he will start to resemble a General in the Ethiopian Air Force!

Guess he needed more stars to appear smarter than he is. He is about as bright as a box of black crayons...

Did UNCC give him a fake degree to go with his fake stars?

He'll wait until the next time he charges an officer for doing his job, and then give himself five star status.

I have this from both the horse's mouth and the radio. Hire the activist in dispatch and it doesn't matter who the officer is.

Yes, dispatcher...I caught you out at a restaurant bragging about connections that got you in and your fucked up political views that undermine your job suitability. You blame whites for everything and mommy knows the brass. How cute. You can get a paycheck and get officers killed. ONLY IN AMERICA.

Chief Monroe is the best thing that ever happened to this department and this city.

He deserves the promotion!

So all you cry babies sit down and shut the F up!

8:58, your statement is either dripping with sarcasm or you're part of the command staff, which is it?

Best thing huh? How much did the Marcus Jackson thing cost the city?

As far as stupid expenditures go, it is pretty petty. Who cares? I mean, I think he looks ridiculous. In the grand scheme of "we are $15m over budget so no new hires and no raises ect", i don't care. I want to know who decided to buy LED lights for all the parking decks (half are burned out already btw). Where did the cash come to remodel the 3rd floor? Do we really spend $100k a year on marketing items? Coloring books and color-change pencils to the tune of $100k???? I'm way more worried about where we are bleeding money than which gaudy addition the chief decides to add to his uniform.

Chief: Def. the head or leader of an organized body of people; the person highest in authority, the head or ruler of a tribe or clan.

Leader he's not but maybe he's a great manager?

The department is so over funded and full of funny money it is crazy.

The answer to both questions is "No!"

Budget shorfall???? Where is all this OT $$$ that people are being "voluntold" to work coming from?

Thank god I am retired. The place has become a cesspool of cronyism and ass kissing.

How much under the table money has this loser been taking from such fine companies as this one?
"shot spotter"- spots the money in the police budget, and with graft, gets the program installed, regardless if it works or not.

Not a single case has been made with the shot spotter system. It is worthless and a huge waste of taxpayers money.

Anyone else feel like the damage done is too severe and no one any positions of power care to right the wrong?

I plan to keep my head down and let this storm pass just like all the others.

Our department has been gutted and spayed/neutered, depending on your perspective.

Cedar did you happen to see Rodney sitting courtside at all the NCAA games this weekend?

And where was he when CMPD's own were injured in the line of duty?

Sitting right there watching hoops acting like a true King.

What was the injury?

RoMo put the 4 stars on after he saw Irwin did the same thing. There was not way he was going to let Irwin out rank him!!! HAHA!!

If he ever get a real degree, he'll add the 5th star I suppose!

I was told he held those stars in his desk since he came to Charlotte but never had the balls to flip off Walton the prior city manager and wear them.

But I guess Carlee is such a pussy he decided it was time.

Stars.... Shmars.... If the troops don't respect you it doesn't matter how much brass you have on your collar. I know Sgt's and Officers that gain more respect from their peers than this man. I assume that he decided to sport a couple of extra just to feel more important about himself. That is what people with Narcissistic Personality Disorder do.....

Has anyone heard anymore about the airport lawsuit mess?

What about academy officer Schwartz and ceu sgt Anderson being caught by PI hooking up? Yet they fire recruits doing far less???

It is sad there are many officers that should have been topped off years ago. Now suddenly the city budget is over 15 million short. There will be another pay freeze next year meaning officers will never reach top pay because the city continue to neglect its own police officers. How much longer can this go on?! Officers can only take no pay increase for so much longer if the city does not correct this problem soon. The PD will be at rapid decline and from what I have been told moral inside the PD is at a all time record low.

If you think cops don't make enough money go walk around some of the parking lots of their offices. 30 and 40 thousand dollar vehicles all over the place. If they don't like their jobs they can quit. There's plenty of people who could use the jobs

The word from the chief's office is that the city and airport officers won't settle until the end of the year when Benton Herring retires. Clean slate.

Herring could care less...he's a good captain that has stayed out of the drama. Hate to see him go.