It's a simple concept, the punishment should fit the crime. But Georgia is apparently just a little confused about the concept.

Kelly Renee Gissendaner was sentenced to death for encouraging her boyfriend to kill her husband. He did the deed, admitted to the killing and received a sentence of life in prison. But it was Gissendaner who received a death sentence. 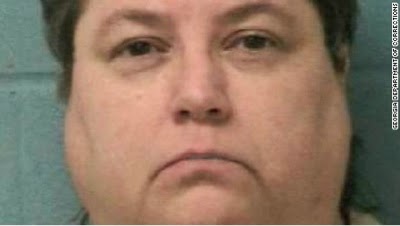 For 18 years she has lingered on death row. Then last week her appeals excused, she sat down to eat her final meal and accept the ultimate punishment for her crime.

But just hours before she was to be put to death the Georgia Department of a Corrections called off the execution because of the threat of .... wait for it..... SNOW!

Her execution was rescheduled for this past Monday. Again her lawyers filed appeals and requests for clemency, all were denied and again she was served her last meal.

In the death chamber she was strapped to the table the IV hooked up and moments before the injection of death was to be administered, the State of a Georgia again called off the execution this time citing the quality of the drug .

Apparently someone had forgotten to check the expiration date.

Back to her cell she shuffled wearing handcuffs and leg irons, to await her next date with the grim reaper.

Talk about cruel and unusual punishment. How many times do we conduct a mock execution of a prison before we finally murder her?

I realize Gissendaner is one ugly person with a really ugly past, but she's not the killer. The walk to the death chamber twice is unfathomable. You can't imagine how anyone would feel, coming to terms with her own end in just mere moments only to be told LoL Just Kidding.

The sad part is the taxpayers are on the hook for another last meal consisting of Burger King and other junk food. Keep feeding her this crap, and you won't have to worry about rescheduling a fitting end to this loser's life.