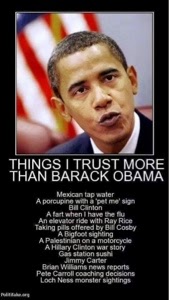 The dates and content of the "racist" emails below:

November 2008: An e-mail said President Obama would not be president for very long because “what black man holds a steady job for four years.”

March 2010: An e-mail mocked African Americans through a story involving child support. One line from the e-mail read: “I be so glad that dis be my last child support payment! Month after month, year after year, all dose payments!”

April 2011: An e-mail depicted Obama as a chimpanzee.

May 2011: An e-mail said: “An African-American woman in New Orleans was admitted into the hospital for a pregnancy termination. Two weeks later she received a check for $5,000. She phoned the hospital to ask who it was from. The hospital said, ‘Crimestoppers.’”

June 2011: An e-mail described a man seeking to obtain “welfare” for his dogs because they are “mixed in color, unemployed, lazy, can’t speak English and have no frigging clue who their Daddies are.”

October 2011: An e-mail included a photo of a group of bare-chested women dancing, seemingly in Africa, with the caption, “Michelle Obama’s High School Reunion.”

December 2011: An e-mail included jokes that are based on offensive stereotypes about Muslims.

SEVEN Racist Emails? Well I guess that explains the anger in Ferguson.

And the President then tells the nation that Ferguson is not isolated, that racism is wide spread among our police departments.

Those seven emails state the truth. It has nothing to do with being a racist, because they prove this is how they act. Plus they expect they should get things for free and if the shoe fits then wear it.

If we canned every cop or firefighter who posted something offensive about blacks, Hispanics or the First Lady on Face Book or via email we wouldn't have a police department or fire department in any city or any town.

Screw you , your wife, and your children.