During the 24 months following the hiring of Rodney Monroe, a wild spending spree was taking place at CMPD. A priority of Chief Monroe's was the up-fitting of his office, ordering his car, building a command center and new command staff uniforms.
What was apparently not a priority was replacing the department's nonfunctional FATS equipment. 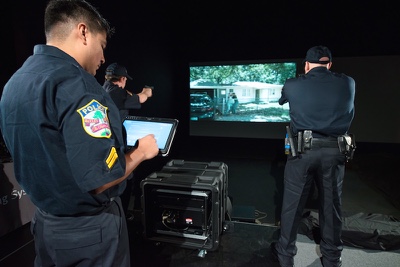 FATS is the standard acronym for FireArmsTraining Simulator. A computer operated shoot-don't shoot training tool. The first goal of FATS is to insure everyone goes home, secondary is acceptable use of lethal force.
According to a Charlotte Observer review of the Estate of Jonathan Ferrell v. Ćity of Charlotte depositions:
CMPD Maj. Michael Adams, who supervised training at the time of Ferrell’s death, testified that the department has used a training simulator since about 2002 but the equipment became inoperable in 2008 and wasn’t replaced for four years.
Read more here: http://www.charlotteobserver.com/news/local/crime/article30514749.html#storylink=cpy.
Long time readers of CP might remember blog posts in 2010 about CMPD Officers taking time off to conduct recurrent training at "Paint Ball" ranges in Union and York counties. Often at their own expense.
Sources tell Cedar Posts that the academy requested funding to replace the system in 2008, 2009 and again in 2011. Apparently the inflow of federal dollars during the run up to the DNC 2012 and/or FBI and Seceret Service demands forced Chief Monroe to approve the replacement of the system in 2012.
Even so the request for a 300 degree state of the art system was denied by command staff. 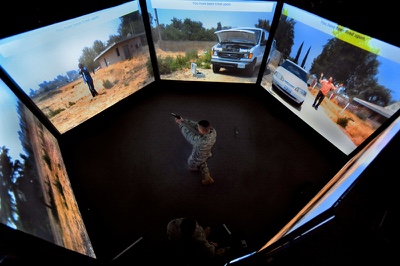 Above FATS 300 degree system.
Apparently Chief Monroe felt that Shot Spotter, new motorcycles and assault vehicles were a priority, and the idea of spending upwards of $150k to train officers just wasn't something that had enough bling to it.
No word of how much if any time Officer Kerrick had on the FATS system during the year prior to Jonathan Ferrell's death. It seems however the outcome would not change.
Read more here: http://www.charlotteobserver.com/news/local/crime/article30514749.html#storylink=cpy
Posted by Cedar Posts at 8:41 PM

We had fats/taser training literally a week prior to his shooting.....instructed by the staff that the best option in multiple officer/single suspect is lethal and non lethal coverage when in a possible deadly force situation.....apprently there was a spot to fill under the bus

@ courthouse... Wow...
Glad these folks have time to protest.. Guess no one has to work this month

Shot spotter is a huge waste of money. It's never contributed to one case being made. Makes you wonder how much of a kickback someone got from the company for implementing the system. Corruption is endemic within the upper echelons of CMPD and the City of Charlotte.

Uh, the tint isn't illegal on a law enforcement there Barney.

A lot of the things you mention were paid for by Homeland Security funds and not the general funds. Not the uniforms obviously! They probably should have replaced the FATs system long before they did, but since they pretty much put an end to all non state mandated training there was no point. And Adams is right. They can't keep any kind of records to a lot of the training like that because when you see that a majority of females and minorities lag behind (NOT ALL OF THEM CALM DOWN)just like they do in general BLET courses, you would have to do something and then that would look like you were singling out the females and minorities and then that wouldn't look good now would it?!? And there are plenty of white males out there that have no business being there too don't get me wrong. Just using the overall dynamic.

I know Potentate Putney has been subpoenaed by the defense and the PAO is trying to figure out how to get that quashed. Should be interesting. Especially since Mr. "I'm a real cop" has never testified in front of a jury before. Kind of funny his first time is what 18 years in as Chief!! Wow, what a "real cop" he is (insert eyes rolling)

CMPD DIV12, so you were the Do-Boy who picked up the vehicles? That says a lot of your illustrious law enforcement career. You obviously weren't of any real law enforcement use to your division so that they tasked you with daily errands. I guess you're so irate because with all of your office REMF and butt kissing you still can't get any type of real specialized assignment. Now get back to those errands Mr. Whiney Pants before they make you actually answer a call for service or something dangerous.

I guess when you're chief you can drive what you want. Who's driving the fully marked out Tahoe with the Charlotte Hornets magnet on the back of it? Freda?? How professional is that? Says a lot about the organization. CMPD that is...not the Hornets!

CMPD DIV 12 said "We were trained to have one officer less then lethal (tazer) one officer lethal in case tazer did not work!" False. Just because a taser doesn't work doesn't mean you get to shoot people. That is only in the case of deadly force situation. If you had a guy put his hands up to fight you and threaten to kick your ass and your partner pulled out a TASER, you wouldn't draw your gun.... I hope.

Div 12, careful what you post about car pickups....you'll identify yourself.

WCNC is still promoting the narrative that Ferrell was "looking for help" after wrecking.... Uh, is that what the video shows?? What hypocrisy!!

I know right?! The media is so unbelievably one-sided. Same fools that perpetuate the black lives matter narrative... Just like the millions of black lives that perished in abortion clinics??? Wake the hell up!!

Today's big question.... Will Capt Campagna toe the party line and continue to throw Officer Kerrick under the bus or do the right thing. He's had his problems with the upper command staff in the past, basically at his terminal rank now so we will see. Toady up to the administration or do the right thing ?

Your a dumb ass and must be one of those ass kissers somewhere in line trying to get a specialized assignment or cush job. Your also an ass clown like Campagna. By throwing your fellow officers under the bus. I'm glad that I know longer work with CMPD and have moved on to a much better job. Your the kind of people that we don't need on the department because of your pissy demeanor. With the size of JF and Officer Kerrick. Hell yeah I would have drawn my weapon and not where is it written in stone in the directive that you can't pull out your weapon. If the tazer didn't work, then there is no way an impact weapon would have done anything. Really? If you feel threatened which Im sure he did due to his size and the actions of demeanor of JF. Training is to shot until the aggressive act stops. I would have given him all 16 rounds if that is what was required to stop him.

Your a dumb ass and must be one of those ass kissers somewhere in line trying to get a specialized assignment or cush job. Your also an ass clown like Campagna. By throwing your fellow officers under the bus. I'm glad that I know longer work with CMPD and have moved on to a much better job. Your the kind of people that we don't need on the department because of your pissy demeanor. With the size of JF and Officer Kerrick. Hell yeah I would have drawn my weapon and no where is it written in stone in the directive that you can't pull out your weapon. If the tazer didn't work, then there is no way an impact weapon would have done anything. Really? If you feel threatened which Im sure he did due to his size and the actions of demeanor of JF. Training is to shot until the aggressive act stops. I would have given him all 16 rounds if that is what was required to stop him.

If you are as big as JF, as athletic as JF, as strong and quick as JF, you sure as hell better recognize you are a much greater threat to an officer than a 110 pound female. Those who have thrown Officer Kerrick under the bus have conveniently forgotten this training. An Officer must ALWAYS recognize his own limitations, and the potential of his adversary. All three officers on scene correctly assessed how dangerous JF was, and reacted appropriately. Had JF attempted to obtain the service weapon of one of the Black officers, we wouldn't even be here today.