BB&T Ballpark and Charlotte Knights Already At The Crossroads

Interesting pricing dynamics are at work inside the BB&T Ballpark, the same model that is effect at ballparks across the county, and one that should be a recipe for failure. The idea that patrons will pay absurdly high concession prices but will keep coming back is clearly a myth. 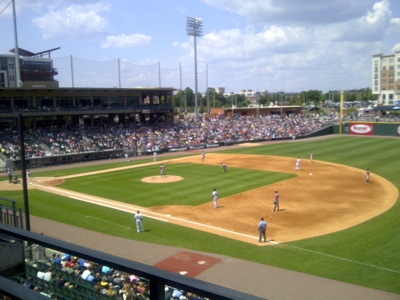 The Charlotte Knights are into year three at their new home, and a good amount of the wow factor has faded. As the season closes in on the half way mark it is important to note that this past Sunday's attendance for the 11 inning nail biter was relatively low despite the perfect weather.

Now that the "new car smell" is gone the Knights are returning the Minor League playbook for attendance gimmicks. Star Wars jersey night, fireworks and kids run the bases Sunday all come into the picture.

But baseball has always been more about the total experience than the game itself, a process that is diametrically opposed to the NFL an enterprise that sucks millions from fan's pockets mainly on Sundays.

Minor League Baseball Fan demographics - inside the ballpark, one thing is for certain the fans are shockingly white, as are the staff. In a region that is 34 percent African American inside the ballpark it's less than 15 percent.

Of course $7.00 for a bottle of Miller Lite is nutty, and while $3.00 a bottle for water is reasonable $1.00 for a plastic cup full of tap water is out of line.
Is Knights Baseball a good family bargain? On ticket price alone and based on the fun per hour ratio Sunday's 11 inning fame was a steal if compared to a trip to the movies or even an all day Carowinds adventure. But fueling a family of four at the concession stand was a deal breaker.
BB&T Ballpark concession prices are nearly 30 percent higher than Regal Cinimas are almost ouble Carolwinds on many of the standard fare. Speciality items were even higher. Even prices at the team store are nearly 20 percent higher for ball caps than at Dicks SouthPark.
Cedars Take: It's not sustainable, the food is middle of the road and the prices are compareable only to MLB ballparks in the Northeast.
Posted by Cedar Posts at 6:55 PM

I went down to the old park once or twice a while ago and it was a fun night. A light rail trip would have made it more fun and convenient. The prices to enjoy mediocre food, drink and entertainment in these overpriced, tax subsidized, elitist clubhouse sports venues are too much for the average person or couple or family to pay for or enjoy ever, much less regularly. But we're funding those who do and the billionaire owners raking in profits.

The bar staff at this place was professional and their drinks ensured us a fun night in the city. I can't wait to go back. Most of the negative elements of going to a more popular place are avoided here; the staff at venues Chicago was really mature and respectful.

Unfortunately i was with my 5 little yorkie. Otherwise it could go to somewhere else.