Did you ever read through the Sunday Obituaries, scan the pages of dead people, and think to yourself what did they leave out? 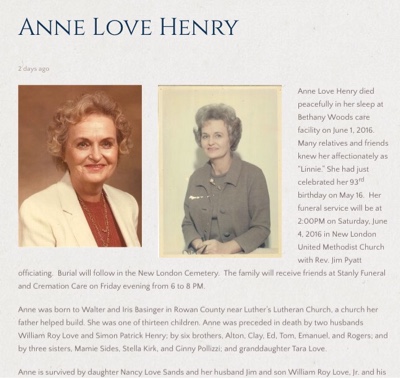 Ann Love was a mean spirited rude and hate filled woman who spent the last 35 years of her life spreading misery and spitefulness among all she came in contact with. She married a man named Simon Henry who had lost his wife to cancer, in hopes of cashing in on his perceived fortune. She was later surprised to learn that the cash cow was really a starving goat. When Simon Henry's health turned for the worst she dropped him off at the VA Hospital. Over the next year she would go through elaborate schemes to abandon him in a nursing homes and hospitals, often claiming he was too big of a man, too heavy to help or lift, eventually claiming she was afraid he'd fall on her.
In the days before his death, Simon Henry begged to go home for Christmas. Ann Love refused and Simon Henry died in a stark hospital room several days later on a cold January morning.
When he died she was left with nothing, as Simon Henry gave what little he had to his grandchildren. Even his house was left to his grand daughter with the understanding that Ann Love could live there until her death, provided she paid the mortgage and took care of the place. It was a torturous 14 years.
I could spend pages detailing her psychotic episodes, bizarre behavior, sociopathic issues but there's no point, except to say that my wife watched this woman suck the life out of the man that was her father. Father and daughter seldom saw each other in his final years because of Anne Love.
They say there's a special place in Hell for people like Ann Love, I personally hope her sole enjoys eternal pain.
Posted by Cedar Posts at 3:09 AM