Much of my childhood was in the company of black people who I never gave a second thought to the color of their skin, their status or my white privilege. They worked on family farms, cleaned my parent's homes watched after young siblings, cooked our meals, even rode in my car often when I was in high school. They were porters on trains and airports that I as a young child admired and appreciated.
My first encounter with overt racism was as simple and as straight forward as humidity on Carolina August afternoon. A summer job pumping gas for less than minimum wage at a gas station on Charlotte's South Boulevard paved the way for many things, my love of all things mechanical, small business and my perception of race in America. 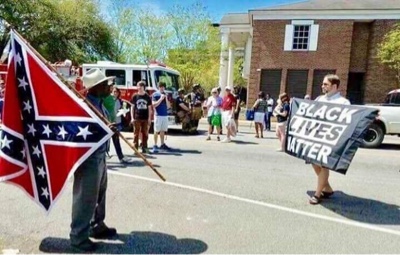 The afternoon lull came each day around 2, just about the time the Carolina sun beat down on the asphalt like lucifer's torch. I watched Carl retired postal worker now gas station attendant slide a couple of dimes in the soda machine outside and extract an cold bottle of RC cola.
He entered the gas station office via the front door. The aluminum door made an odd scrape and clank noise when opened, as the heat of the day pressed against the cool of the inside of the office via the plate glass in the door frame, it expanded just enough to become a tight fit. The window air conditioner perched over the door rumbled, and condensation would drip on any unsuspecting customer who lingered too long just outside the doorway.
Carl walked around the counter grabbing a bag of Lance salted peanuts from the honor system display stand, without paying. His nick name was motor mouth and I watched as he sat down at the absent station owner's chair, propped his feet up on the owner's desk, opened the stolen bag of peanuts and poured them carefully into the RC Cola bottle.
"Hey Lou" he shouted towards the parts storage area that was separated from the office by a long metal wall adorned with Gulf Oil cans, radiator hoses and fan belts. The wall didn't quite reach the ceiling. "Did you know it's now illegal to say Nigger?" A muffled "what?" sprang from the storage room. "I said it's ill eagle" his emphasis on ill "to say nigger"
Lou responded "Yeah I heard that",
Carl with his mouth full of soda and peanuts proceed to expand on this new found point of law. "So leme ask you, how can it be illegal to call a nigger, nigger?"
"Just ain't right." Replied Lou. "No its not" confirmed Carl.
The lull continued with only the sound of the air conditioner and gas station owners chair creaking as carl leaned back pulling his Gulf Oil Company hat down over his eyes, confident of his profound pontification.
And I was left to consider his overt racism on my own terms.
Over the years I've considered Carl's thinking as my bench mark for being a racist. As far as I knew Carl wasn't a member of the klan or some neo nazi group but Carl was clearly a racist.
Based on today's standard Carl would be considered an extremist, bigoted neo nazi white supremacist who needed to be delet with on the most harshest terms. Carl of course was a die hard Dixiecrat and fan of Lyndon Johnson and George Wallace.
By today's standard I'm a racist bigot as well, a racist as much as Donald Trump. Everyone is a racist bigot who doesn't agree with the Black Lives Matter Antifa agenda. And frankly it not doing much for the cause of racial justice.
Posted by Cedar Posts at 2:56 PM