Cam Newton Should Take A Squat

Cam Newton said before last Sunday's game against New England that he'd likely have some kind of on field protest, before during or after the National Anthem.

These theatrics have become common place during the NFL's pre game effort, most often during the National Anthem. Trouble is the protesters aren't sure what they are protesting and they are often left to explain the meaning behind their, taking a knee, sitting on the bench, linking arms with some teammates and more.

FoxSports, as a general rule, does not show players taking a knee or doing whatever during the National Anthem.


So what Cam came up with was a raised "Black Power" clenched fist on field.

This is sort of melodramatic, silliness Newton is famous for and it continued post game as he refused several sideline interviews as he stormed off the field into the locker room. 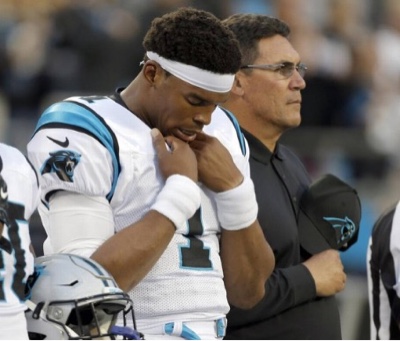 Cedar's Take: Seems to me that Newton is no more respectful regarding the flag and national anthem than he is of service help in Charlotte restaurants. The only worse tipper is Michael Jordan.

Newton's normal, gum smacking, rocking back and forth, hands hanging from his shoulder pads is his idea of respect.
That said Panthers are 3-1 with a very nice win over the Pats. But it wasn't due to Newton's performance rather New England's impotent defense. So maybe that's why Newton refused the requests for sideline interview.
Newton has always been petulant child, it wouldn't surprise me if his next attention getting protest is to take a squat in the red zone and drop a duce. But never mind he already did that during the Panthers loss to Denver in the Super Bowl.
Keep Squatting!