On Monday Charlotte's homicide rate hit 105, and while the numbers are debated (is it 103,104 or 105)* and Charlotte Mayor Vi Lyles promises to address the issue after the first of the year, the bodies keep hitting the floor.

The reason for her honor's silence is clear. 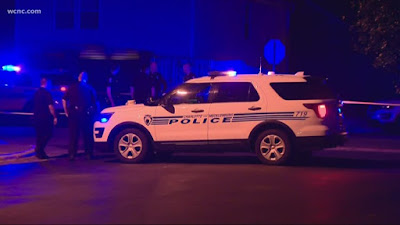 The African American community has (largely) become a culture of violence embracing criminality and gun play.

Physical violence is endemic in the African American Community and is seen as a solution to everyday problems. CMPD Chief Kerr Putney: Shooting someone over "twenty dollars, a burger from a fast food place, somebody said something to your girlfriend and small amounts of marijuana. People are dying over things that really aren't that big of a deal."

Chief Putney doesn't say "black people" but his message is pretty clear he's disgusted with what is happening.

11 year old Romello Wilcox is an example of how bad it has become and how it now transcends generations. A simple dispute escalated into physical violence without any regard for the outcome, and now a young boy is dead and two unnamed juveniles, a girl age 12 and a boy age 11 are charged in Romello's death. (*Romello Wilcox is 104 by Cedar's count)

The shooting death of Scott Brooks, which is still under investigation will most likely end with two young black men being charged and the finding that their take was all of twenty dollars.

Call it racism if you want but it would be smarter to admit there’s a problem when nearly 90% percent of victims and assailants in Charlotte’s record number of homicides are African American.

This is not new, Billy Roberts penned the Jimmy Hendrix song "Hey Joe" in the 1960's Greenwich Village based on a fictional conversation between two men, but a situation he was aware of in nearby Harlem on more than one occasion. The song often seen to glorify violence to settle problems. In this case an unfaithful wife the solution "gun her down".

Until we can figure out a way to change this demographic, we need to incarcerate violent offenders and get them off the streets. If you use a gun during the commission of a crime that's it "game over" no second chances.

This is a basic responsibility of civil society, this is why we live in cities with rules and laws and ordinances. If the city of Charlotte can't provide this basic service we need to replace the incompetence until it does.

Liberals will challenge the numbers and the suggestion that incarceration works, and will add that the US has the largest prison population in the world, citing lower prisoner counts in China and Russia.

The reason of course China and Russia have low prison populations is they simply execute the violent offenders. And that works for me.
Posted by Chip Starr at 9:34 AM

Nice dream world you are living in! Just do like a large number of other folks have done and move to Union County. Much more quiet and peaceful. More of a family atmosphere...

Cedar just FYI CMPD PIO is not happy that you posted that detectives are looking for 2 male suspects before they hold their presser or send out the press release. Just saying.

Oh gosh, Officer June is very furious with CP. She is going to slap his teeth out.

I wonder why, in one article there is a description of a suspect, where the suspect tried to grab a young girl as she exited the school bus, but the only description of the two wanted in the Brooks homicide is "two males."

Cedar is right, we are so worried about being politically correct that many are blind to the real issue, for whatever reason black youth think guns and a life of crime are the American dream. They have no greater ambition because they have been programed that whitey be it police or employers are racist and because they were born black they have no future. Years of democrats telling them how bad they have it has allowed them to accept that as their fate.

Cedar did you see interview where Putney is saying "this is not their first rodeo"? I wonder how many times in the last year he's fumed at your tweets saying just that?

I can't say for certain but I'd guess your number graphics and posts help add pressure to fix this GD mess. Stay at it!

When you have a city of criminals, without a jail or real police force....violence escalates to murder. I feel bad for that business man. He gave property to affordable housing so these nigs could grow up and murder someone else, too.

I have no doubt the countdown tweets have helped Chief come out against the Elec Monitoring. That's standard fare for any democrat...always worried about the optics. Not many who understand the problem blame the police at all. One day, maybe this pressure can be put on the judges at the same level. Wasn't there a victim rights group that would go attend bond hearings at some point? Charlotte's poor media is down to 5 people at the Observer, including delivery folks, and a lot of talking heads on TV who aren't really from around here, so they don't understand how much worse it's getting. But, it was worse in the '90's and somehow it got better. Not sure what brought the rate down then, but the city was half the size, and we hit something like 125 in one year. Not a stat that anyone wants to break.
Men in blue, keep an eye out for each other. If we have this element out there, they don't understand consequences at all. if they are now doing jeweler heists at Christmas time, hitting fast food joints at 11am, or restaurants in the wee hours, there's nobody safe out there.

TRU THAT. NO ONE IS SAFE IN THIS TOWN. THERE IS NO JUSTICE OR POLICE RESPONSE.

Just saw were Vi Lyles is out of the country on city business. Interesting.