Via: Fox News and Daily Mail

Loved ones of the 24-year-old Pennsylvania woman who was drugged and raped and was later found dead in a Miami Beach hotel room are remembering her as an "amazing human being" and a "beautiful girl." 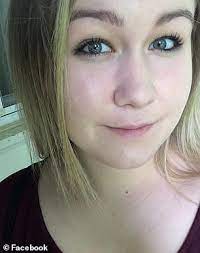 The Miami-Dade Medical Examiner’s Office is still working to determine Christine Englehardt’s cause of death after the young woman’s semi-nude body was discovered Thursday at the Albion Hotel in South Beach, according to reports.

Investigators determined she was drugged and sexually assaulted, the Miami Herald and the New York Post reported. The suspects then reportedly stole her credit cards and left less than an hour after arriving. 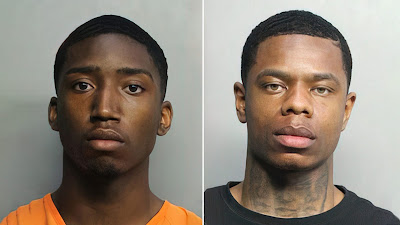 Evoire Collier, 21, and Dorian Taylor, 24 -- both from Greensboro, North Carolina -- have been arrested and charged with sexual battery, burglary with battery, petty theft and the fraudulent use of a credit card, the Herald reported. More charges could follow depending on the medical examiner’s determination, officials said.

Collier told investigators that Taylor allegedly gave Englehardt a "green pill," which he believed was Percocet, according to the Herald.

As the investigation continues, loved ones are mourning the loss of Englehardt, a young woman whose "life was taken from her," according to a GoFundMe created to raise money for her funeral and memorial costs.

"Anyone who knows this beautiful girl knows that she had the biggest heart there was and her laugh was nothing short of memorable," the fundraising page states. "She would do anything for a person in need and was always fun to be around no matter what."

The GoFundMe describes how Englehardt’s attackers don't deserve the spotlight, and "stole this woman's entire future in a very sickening way and put her mother and father in a great deal of heartbreak."

"I am not going to talk about what happened to her because this isn’t about that," the page continues. "This is about her life and how the family deserves to be helped out for raising such an amazing human being only to have her taken from us way too soon."

Chillingly, in a post on her purported Facebook page from July 2019, Englehardt urged her followers "go with [their] gut" after she had a scary experience with what she believed was a "predator scheme."

"So if you ever feel unsafe in ANY way or have a feeling something isn’t right, DON’T hesitate to notify the police," she wrote at the time. "Please be on alert for any suspicious people or cars. This is a dangerous world now unfortunately and you never know what anyone’s true intentions are."

Meanwhile, Taylor and Collier were in Miami court on Monday, where Collier’s sister asked that he be released to the family, according to a broadcast shared by NBC Miami.

"I'm severely bewildered by these charges and accusations against him, but I can attest for his character and I can attest for responsibility of him standing trial for whatever charges," the woman told Judge Mindy S. Glazer. "If you please let my brother come home and let our family handle the situation appropriately we will do whatever is necessary that Miami-Dade County asks of us."

Glazer ultimately ordered both men held without bond, according to the Daily Mail.

After killing Englehardt Taylor and Collier returned to South Beach to stalk their next victim. 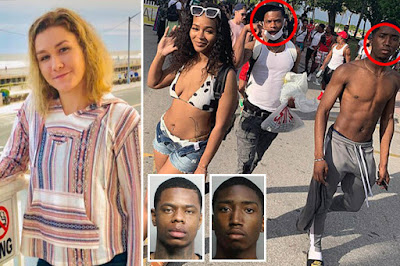 Both remain held without bond on the rape charges.
Posted by Cedar Posts at 10:49 AM

Dumb Ass Coal Burner what did she expect? Hope Florida gives these two noggers the needle after due process of course. I hear one of them is signing like a Robin trying to save his dumb black ass. They both get the needle if you ask me.

That's really sad never understood why some white girls lower themselves to that level. Those two need to be put down for so many reasons and I'd be first to volunteer and push the button.

So sad. Probably one of those suburbanite BLM, say their name types who was acting out in order to piss off mommie and daddy. They just dont really understand the hood rat mentality.

I’m all for throwing the book at these fools ! I hope they never see the light of day again.

Hope they play with their booty holes. I can’t believe his sister said that idiotic shit

I’m sick by all of this. I’m 1/2 black but what have my people contributed to our society? The Asians continue to pump out technology, martial arts and great cuisine. Indian folks... great tech support if you can understand them. The Jews gave us our moral law (10 commandments) and of course Jesus... shout out to my boy Dr. Phil. The Italians blessed us with great cuisine, art, fine sports cars and Italian suits. I guess my point is just about every ethnic group has contributed in some part to the great society we live in today but sadly.. my people ain’t done shit but take from society.

^ your an idiot! Blacks have invented hundreds of things that whites took credit for.

pworld is right sort of I don't know about 100 of things or that whites took credit for them.

In the 40s, 50, and 60s black people were super smart and wickedly creative.

But as a whole African Americans today are a blight and maybe it is because of how liberals treat them and the whole victim culture thing. Joe Biden saying you ain't black if you don't vote for me.

Welfare and SnapCards and EBT free stuff and the only cool now is guns hookers and drug dealing.

Noogies always going to be the loser race. Look at these two MoFos they were made to end up strapped to a gurney and put to death. You can call it white privilege if you want. I call it born stupid.

That’s what I’m saying. Aside from the drain on our deficit via food stamps and section 8 housing the only thing they contribute is job security for us.

Remember brothers and sisters. JJ’s Core 4. Remember to take care or yourself and your mental health
This job isn’t worth loosing your sanity

What are the new changes to uniform?

I'm all about JJ's Core 4. I take care of my mental health (and career) by staying in my Hidey Hole!

Cedar, Is the following article about the Nike satanic shoes true or a sick joke? Its always hard to tell anymore.

Does anyone have a copy of the picture of chief Jennings kneeling with the his fist in air ? Please send out if u do

The Chief was on his knees??

It can be found very easily with a google search.

I know I have the picture saved along with other command and officers taking a knee. I also have a few pics of officers spray painting boarded up businesses.

THIS PAGE HAS BECOME SO RACIST SINCE TRUMP WAS KICKED OUT OF OFFICE. THE BLATENT DISRESPECT FOR CMPD AUTHORITY IS DISGRACEFUL AND UNTASTEFUL. JJ AND HIS TEAM HAVE SPENT THEIR ENTIRE CAREERS SACRAFICING FOR THIS CITY AND ALL OF YOU. IF OFFICERS WERE SPRAY PAINTING BUILDINGS THEN THEY NEED TO BE OUTTED AND CONDEMNED. TAKING A KNEE TO THE MOB IS SHOW OF SUPPORT FOR TERRORISM, AND I KNOW I SAW BRAD KOCH DOING IT BEFORE HE WAS WHOOPED.

PWORLD NEEDS TO EAT A DICK AND GET OFF THIS PAGE. THIS IS FOR COPS AND FIREFIGHERS ONLY.

Seriously JJ taking a knee? I get it he's woke! But woke is nope when you are wearing a badge. Stop disrespecting the rule of law. If you don't like the law and refuse to enforce it then fine resign turn in your badge and service weapon.

Then and only then you can take a knee and raise your fist in support of George Floyd.

and FYI Johnnie better get his shit straight because this trial is gonna be a short fuse.

Neck tattoo every time might as well spell THUG LIFE

Them two def gonna get the death penalty its the indifference part that's gonna do it. Rape and kill a woman in Florida sure fire way to the death chamber.

What is a 24 yr old doing at Spring break during a pandemic? Imagine leaving this world with 2 brothers raping you. Sounds like a Vi Lyles romance story.
What has gotten into these woke white chicks that they're willing to give their life for the taste of the black penis? Her parents should be put down like injured dogs.

Is it getting warm in here, or is that just the coal burner I’m feeling?